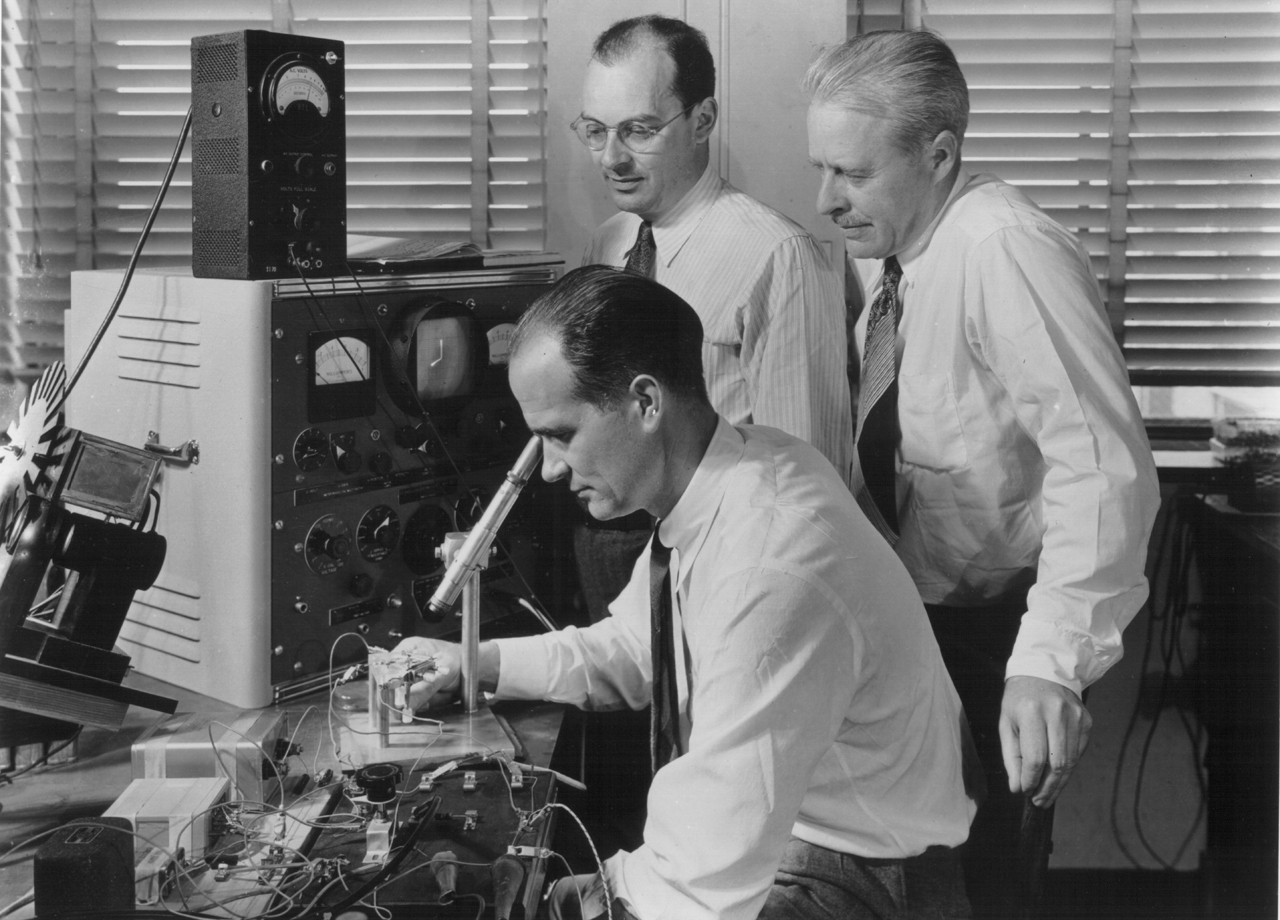 The world-famous mother of invention, Bell Labs, was itself a child of that mother of all monopolies, Ma Bell. And though Ma Bell in its old form is long gone, the laboratory soldiers on. Martha Teichner reports:

It looks like some tiny, weird work of art. But it won three physicists from Bell Labs a Nobel Prize. It's rthe first transistor.

"This was an invention from 1947," said Edward Eckert, the archivist for Alcatel Lucent - the AT&T spinoff that operates the labs today. "Without this, a cell phone would be the size of a building. This is the beginning of the microelectronics revolution, everything getting smaller."

Eckert also showed Teichner a 1960s helium neon laser - the first one that would emit a continuous beam of laser light.

The laser was invented at Bell Labs, when it was the research arm for AT&T - "Ma Bell," everybody's telephone company.

"In about ten years, we were able to shrink these types of lasers to something the size of a grain of salt," said Eckert. "We knew at Bell Labs that this was going to be the next game changer in the telecommunications network."

Suddenly data could travel at the speed of light over telephone lines.

And that was just the beginning. It's hard to name an electronic device that doesn't use lasers. Thank you, Bell Labs, for that . . . and for fax machines, solar cells, digital cameras, and don't forget Telstar, the first satellite to transmit television pictures.

"I think one of the ways to think of Bell Labs is as the world's greatest laboratory," said Jon Gertner, who has written a history of Bell Labs. "It was a place that could do A to Z innovation.

"There are a couple of reasons it was so productive," he continued. "I think for one thing, it was attached to a monopoly, so it had an almost steady stream of dollars. Another reason was that it really had the smartest people in the world working there" - who managed to win seven Nobel Prizes in all.

Founded in 1925, Bell Labs eventually employed 25,000 people worldwide, most of them concentrated in and around Murray Hill, N.J. No bottom-line pressures meant science could take its time, but often was ahead of its time.

And when did you get your first cell phone, in the 1990s maybe? Even later? Well, Bell Labs devised the concept in 1947, and had an actual system up and running in Chicago in 1977.

"We didn't worry about competition, we didn't worry about funding, but we worried about producing something that was going to matter," said Richard Frenkiel, who was the first Bell Labs engineer tasked with turning the concept of the cell phone into reality.

"Monopoly is a term that tends to carry a bad connotation," said Teichner.

"We thought we were the GOOD guys," replied Frenkiel.

AT&T was broken up in 1984. Suddenly, all that "Monopoly money" - $4.7 billion a year in today's dollars - was no longer automatic. No more passing Go!

"Without the monopoly, it can never be the same as it was," said Frenkiel. "But I'm not saying it's worse. I'm just saying the world has moved on to a different model for how things are created, and things are getting created."

Bell Labs VP Theodore Sizer is doing some of that creating, such as the "light radio."

Instead of 25,000 employees, today Bell Labs employs 1,500. The scope of their research is narrower, tied to customers' needs. But their budget is still over $3 billion a year.

"Are we as large in numbers as we were before? No, but the culture, the thirst for knowledge is still there," said Sizer. "It's never left."

Gertner said there are lessons to be learned from Bell Labs: "Basic research and applied research can pay tremendous dividends. It can lead to products and devices and innovations that change the world."

Down through the years, Bell Labs people have received more than 17,000 patents - that's like one patent a day for 50 years.