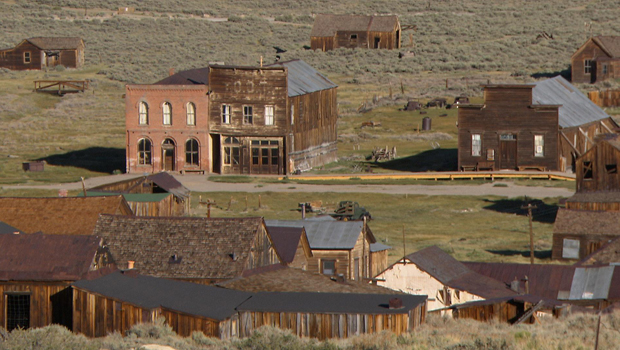 In a ghost town, every day is Halloween, or so it seems to those who know America's deserted communities best. Barry Petersen knows all the favorite haunts:

If you listen hard enough when the hot afternoon wind rustles, you might just hear echoes of 1870s Bodie, Calif., on Main Street -- the days of rich mining and fast money.

"You would be hearing saloon music coming out of the saloons -- people probably hootin' and hollerin'," said Terri Geissinger, an historian and guide for the Bodie Foundation, that works to preserve the town, the largest unrestored ghost town in the country.

"We like to have the people guess, 'Who do you think was really making the money here?'" said Geissinger.

And the answer is? "The whiskey and the women," she said. "The girls here in Bodie were making in a week what a miner was making in a month."

In those few boom years, Bodie was one of California's biggest towns, with a population of some 10,000 -- a rival to Los Angeles and San Francisco. Two thousand buildings, 200 restaurants that often stayed open 24/7, just like the hillside mine working a lode of gold.

And then, as fast as Bodie grew, when the gold played out, Bodie died.

Unlike so many Wild West towns that have disappeared throughout the years, Bodie -- now a National Historic Landmark -- still stands (or maybe we should say, leans).

Buildings like the old hotel are preserved as they were, so people can imagine what it was like then -- such as the cue sticks on the pool table.

"Yep, well, for the benefit of the folks that come today, as they peer through the windows, they're really peering through the past," said Geissinger.

A past with characters like Madam Mustache, who got her name from hair growing over her lip as she aged, and ran her gambling house her way.

"She served milk and champagne; no beer or whiskey was allowed," said Geissinger. "No foul language, and no dirty men. They all had to be showered before they sat down at her table."

And there's the house of Lottie Johl, a former prostitute who married a successful businessman and came to Bodie. But she couldn't escape her past as "Naughty Lottie," the soiled dove.

"In fact, there's still mystery around her death, whether she was poisoned, or whether she took too much medicine, we don't know," said Geissinger.

Turns out, some of the dead are not quite at rest.

Geissinger is a believer, because she and others often stay in town overnight as part of their jobs. And one night: "I felt somebody, that sense that somebody's looking at you. I didn't open my eyes at first. And when I did, I had a little boy in my room. He was in a old-fashioned baseball uniform.

"What came out of my mouth was, 'Don't.' I don't know why. But when he disappeared it was as if somebody was pulling a blind. He went very slowly, and just disappeared."

He vanished into thin air, just like the residents of the ghost town Derry Ranch Placer high up in the Colorado Rockies, where thousands rushed in -- and left almost as fast.

"In some cases they left so quickly, they left the dirty dishes on the table," said author Kenneth Jessen, who has studied ghost towns across the American West.

In the spirit of finding spirits, he remembers one eerie day: "Yeah, I heard kids," he told Petersen. "And I could hear the clanking of all of the noise of the trains coming down the track. But of course, they're just collapsed ruins around me."

"Maybe a little of each!" replied Jessen.

There were once 1,600 ghost towns in Colorado alone, but no more.

"Most of the ghost towns, most of the 1,600, have no buildings, no structures. They're just completely gone, back to prairie, back to the ground," said Jessen.

"How long can we come to places like this?" asked Petersen.

"Not very much longer," said Jessen. As for Derry Ranch Placer, he figures its remains may be around for another generation.

Lest you think these spots belong solely to the past, we took a trip to the town called Bonanza -- yes, Bonanza -- to witness the birth of a ghost town. Colorado officials are deciding whether to revoke Bonanza's status and declared the town abandoned, since it has no government, or even a city council.

In fact, over the past 10 years, 43 other Colorado towns have met a similar fate.

"Bonanza, I think it's just going to where it's running its natural course," said Mark Perkovich, the town's sole resident, who showed off what's left of Bonanza, far from its glory days.

"The big empty lot, there was a big hotel here," he said. "One of them was called the Cannon House.

"And I've seen advertisements in that old newspaper down there for fresh oysters at that place," he laughed.

The area has a few summer residents, but in the winter Mark is pretty much alone -- or is he?

"Sometimes you do kind of get that feeling when you walk through here," he said. "It occurs to me in the wintertime when I'm not going to see anyone, and I'm walking through town and the wind's blowing. No, I get a sense of some lingering . . . thing here."

Back in Bodie, there's one more important stop in the hunt for ghosts in ghost towns: the morgue. The baby coffins had windows so a mother could see her child's face as the body was lowered into the grave.

And for adults, in this place where wood was precious, an uncomfortable reality when it came to preparing the dead:

"Legend has it if you died in Bodie, they broke your legs to kind of bend you to fit in the caskets," said Geissinger. "They were saving wood for the caskets. And they were also, if the ground was frozen, they didn't have to dig a a bigger hole."

Today we look back and marvel at how those days were so hard. But maybe those who lived and loved and turned barren landscapes into boom towns, maybe they just can't let go.

"Maybe they're hanging around to help protect it," said Geissinger. "Maybe they enjoyed themselves so much that they're enjoying us now looking back into the windows of time."