When it comes to issues of CRIME and PUNISHMENT, the stakes are never higher than when the crime is murder, and the punishment is death. Opinion about capital punishment is sharply divided in the United States, and the debate is playing out right now in two very different Death Row cases. Seth Doane reports our Cover Story:

Ronnie Lee Gardner deserves to die: So say the people of Utah, where he killed a bartender in cold blood, then murdered an attorney during an escape attempt.

Gaile Owens also faces death, in Tennessee on September 28, for hiring someone to kill her husband in 1985.

Just after midnight this Friday, barring a last-minute stay, Gardner will become the 28th person put to death in the United States this year.

Ordinarily, executions attract little national attention, but this one is different.

If his appeal is denied, Gardner has chosen to die by firing squad. He will be strapped to a chair, a hood pulled over his head, and a target placed over his heart, and he will be shot to death . . . the first such execution since 1996.

"This is clearly a throwback to an earlier time, and people wonder, how can we still be doing that?" asked Richard Dieter, executive director of the Death Penalty Information Center in Washington, D.C.

By choosing death by firing squad - Utah allows those condemned before 2004 to opt for firing squad over lethal injection - Gardner has put this issue back on the front pages.

"Yes, and of course for him, this is going to be life or death," said Dieter. "But for the country, we do need to talk about this. We're gonna kill somebody. And we do that pretty regularly . . . not that often, but every week somebody's being executed in the United States."

With all the attention focused again on the death penalty, you might be surprised to learn that last year fewer death sentences were handed out than at any time in the past 30 years. So are we witnessing the slow death . . . of the death penalty itself?

Overall, executions are down since reaching a peak of 98 in 1999. In the last decade, the number has dropped by almost half, to 52 last year. Why a slowdown?

Dieter says there are a couple of factors: "One is that we are aware in ways we never realized before that mistakes are made, that sometimes innocent people are convicted and sentenced to death, perhaps even executed."

Since the advent of DNA testing, 17 death row prisoners have been found innocent, and released.

And while capital punishment is still the law in 35 states, it takes on average 11 years to carry out a sentence, a process that's costly, litigious and - Dieter says - haphazardly used: "About 85% of those executions are in the South. Half of them are in Texas."

Most states do not have an execution in a single year.

Dieter believes the death penalty is a model of inconsistency, and supports a national moratorium.

"If you were to look at who's on death row right now, you would find that about 80% of the cases are people who killed a white victim," he said. "Somehow in our system that's considered a worse crime. Well, that's not fair."

So if the system is so bad, why have it at all?

Public sentiment, for one reason. A recent CBS News poll shows 63% of Americans favor the death penalty, a number that's remained fairly consistent over the past 20 years.

Why? According to New York Law School professor Robert Blecker, "Because some people deserve to die, and we have an obligation to kill them."

Blecker is a well-known proponent of capital punishment. 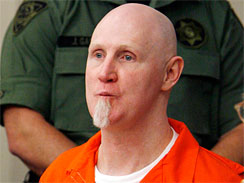 (AP Photo/Francisco Kjolseth)
"It just comes from a sense that justice should be done," he said. "A feeling that we forget the past too easily, a feeling that the victim's voices cry out."

"In your opinion, who deserves to die?" Doane asked.

"The cruel, the most cruel people deserve to die," Becker said. "Those people who take intense pleasure from the suffering of others. At one extreme the torturer, the rapist-murderer, the child murderer; and at the other extreme, the callous, the cold, the wanton. They kill because someone is in their way."

"And life without parole is not enough of a punishment?"

Which brings us back to Gaile Owens.

Kelley Henry is a federal public defender trying desperately to save Owens' life: "I've never seen a case that has this many injustices."

Unless Tennessee Governor Phil Bredesen steps in, this September Owens will become the first woman executed in Tennessee since 1820.

No one disputes the facts. In 1985 Owens hired an accomplice, Sidney Porterfield, to kill her husband, Ronald.

From there, things get complicated.

Henry claims her client was a battered wife, that her husband was cheating on her . . . and none of that mitigating evidence was presented at her trial.

"Gaile's abuse was both emotional, physical and sexual, but it was mostly sexual in nature, marital rape," said Henry.

"Why didn't this come up when her case was being heard?" asked Doane.

"Because her lawyers spent two hours preparing for the penalty phase of her trial," she said.

"So, this is just a case of poor representation?"

"I remember that it just seemed like a senseless killing," said Don Strother, who was the assistant district attorney who prosecuted Gaile Owens for what he calls a brutal murder. He's not buying the "battered woman" defense.

"You know, I think that's something that's being created at this time," he said. "I have no sense that that's, in fact, reality."

"Do you feel that Gaile Owens deserves to die for that crime?" Doane asked.

"I guess the answer to that is yes, I do. But that doesn't matter."

"What matters is a jury of 12 of her peers looked at all the evidence in the case, looked at the aggravating and the mitigating circumstances, and determined that the appropriate punishment in this case was death," Strother said.

But attorney Kelley Henry insists important evidence was left out, including a psychologist's opinion that Owens was abused.

"That expert has since given us an affidavit that says that Gaile told her about the abuse, and that if anyone had ever asked her, she would've been able to testify at trial that Gaile was a battered woman and met the criteria for battered women's syndrome

"Frankly, Gaile wouldn't get a life sentence if she was tried today," Henry replied.

To support that claim, Henry points to, among others, the highly publicized 2006 trial of Mary Winkler.

Ms. Winkler was convicted of shooting her husband who was a minister in West Tennessee in the back while her children were asleep down the hallway. She had very good retained lawyers, who were able to pay for an expert, who was able to conduct the thorough battered women's syndrome evaluation that needed to be done in her case.

Winkler was found guilty of voluntary manslaughter, but not only did she not get the death penalty, she served just 210 days for taking a life . . . and when she got out, was granted custody of her children.

She even got to tell her story to Oprah Winfrey, and was asked:

"Do you feel that you served enough time for this crime?"

"No," Winkler said. "I just was ready for them to lock the door and throw away the key."

Gaile Owens wasn;t so lucky. She has been on death row for 24 years, at the Tennessee Prison for Women.

"The truth and somber reality is that I am and will always be responsible for putting the wheels in motion that resulted in Ron's death, and I am so very sorry for that," Owens said, speaking for the first time on camera.

She agreed to appear in this report, to read from a letter she's written to the governor:

"I have heard that time heals everything but I beg to differ. There are some things that no amount of time or no degree of remorse will ever heal. The choices I made in my life presents an example of a heart and life that will never be free of the sorrow that engulfs me on a daily basis."

Gayle Ray, commissioner of the Tennessee Department of Correction, took us inside the prison walls. Ray said Owens has an excellent reputation:

"She goes to Bible study classes. She's the unit clerk, so she has a job. And over the years I think she's sort of assumed the role of being an advisor to some of the younger inmates, advising them to go on the straight and narrow - you know, 'Don't follow me. Don't do what I did.'"

"Sounds like you're saying Gayle Owens in many ways is a model prisoner - other inmates look up to her," said Doane. "What is achieved by executing her at this point?"

"That's a good question," Ray laughed. "I think, you know, our job is to carry out the laws of the state of Tennessee, and what is achieved by the execution is really a matter of public policy that's left up to the lawmakers."

The case has stirred up a grass-roots movement. At the Donaldson First Baptist Church outside Nashville, members pray for Owens, asking that the governor spare her life.

Meanwhile, America continues to struggle over the fate of Gaile Owens, Ronnie Lee Gardner, and the more than 3,200 others inmates waiting for death.

Dieter said that the victim's always a better person to side with. "But there are principles. There are fairness issues. We have a system of laws. And the death penalty's not working well in that system."

"It sounds like you're painting a picture of a death penalty that doesn't work?" said Doane.

"No, I'm painting a picture of a work in progress," Blecker said.