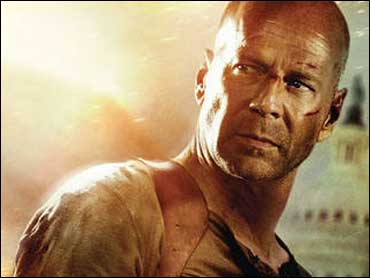 Detective John McClane is back — finally! Now everyone can sleep a little easier. Music legend Paul Simon is out with a new "best of" set and if you want to learn more about what the United States is doing in Iraq, tune into CNN.

"Live Free or Die Harder" Bruce Willis is back as New York City detective John McClane, charged with protecting the United States against attack, even though he's distracted by arguments with his college-age daughter.

Photos: A Star For Bruce Willis

"Ghosts of Cité Soleil" tells the harrowing tale of a Haitian slum where a ruthless gang rules. It's set to a score by Wyclef Jean, who produced the movie.

"Ratatouille" is another creation by director Brad Bird and Pixar studios. This time they are telling the story of Remy the rat, who wants nothing more than to be a chef in Paris. He teams up with Linguini, a garbage boy, and together they become a great culinary artist.

This time Michael Moore is going after the healthcare industry with his new documentary "Sicko". He makes a case against the insurance system.

"Evening" is based on the novel by Susan Minot and was adapted for the screen by her and Pulitzer Prize-winning author of "The Hours," Michael Cunningham. The deeply emotional film illuminates the timeless love which binds mother and daughter. It stars Vanessa Redgrave and her daughter Natasha Richardson; Meryl Streep and her daughter Mamie Gummer, along with Claire Danes and Hugh Dancy.

"Vitus" is a Swiss film about a 12-year-old piano prodigy, Vitus, who seeks refuge from the pressure his parents put on him at his eccentric grandfather's house. Vitus is played by real-life piano prodigy Teo Gheorghiu.

"Burn Notice" is an odd term to most people. But for those in the spy game, it's "an official statement by one intelligence agency to other agencies, domestic or foreign, that an individual or group is unreliable." Secret agent Michael Westen gets blacklisted and becomes unemployed. Now he's looking for the person who burned him. The show premieres on USA Thursday at 10 p.m. ET.

A new Lifetime movie "Girl, Positive" tells the story of a girl who fears she is HIV positive after her neighbor, with whom she once had sex, died an untimely death. She learns that he was an intravenous drug user and was HIV positive. The film airs Monday at 9 p.m. ET.

"Hey Paula" is a reality show about "American Idol" judge Paula Abdul. In the premiere, a whirlwind 48 hours await the "Straight Up" singer as she gets ready for the Grammys, then makes a mad dash to catch a red eye to check out her jewelry designs in Philadelphia. The show premieres on Bravo on Thursday at 10 p.m. ET.

Pearl Jam's seven disc set "Live at the Gorge 05/06" features many, many songs, among them are "I Am Mine," "Crazy Mary," Rearviewmirror and The Who's "Baba O'Riley."

"The Essential Paul Simon" is two CDs and one DVD of the singer/songwriter's greatest hits including "Me and Julio Down by the School Yard," "Still Crazy After All These Years" and "Graceland."

Hip-hop pioneers the Beastie Boys are out with a new, all-instrumental CD: "The Mix Up." They revisit old hits like "Ill Communication."

"Drop Dead Beautiful" by Jackie Collins is the author's 25th novel about one of her most beloved characters, Lucky Santangelo. This time, Santangelo's family is threatened by an enemy from the past.

"Bungalow 2" by Danielle Steel goes beyond the glitz of Hollywood with the tale of a suburban mother who becomes an award-winning screenwriter.

"Dog Days: Dispatches from Bedlam Farm" is Jon Katz's take on his life with his wife, two cows, four donkeys, three hens, a rooster, cat, some sheep and four dogs.

"Black Snake Moan" tells the story of a young nymphomaniac played by Christina Ricci, who is chained up by blues musician Lazarus, played by Samuel L. Jackson. His aim is to cure her of her addiction that worsened after her boyfriend played by Justin Timberlake went to war.

Mark Wahlberg stars in "Shooter" based on the book "Point of Impact" by Stephen Hunter. Wahlberg plays Bob Lee Swagger, a former Marine sniper who is asked to help thwart a plot to assassinate the president only to find out that he has been set up.

Based on a true story. "Pride" is about a an all-black swim team struggling to overcome racism and stereotypes in the 1970s. It stars Terrance Howard and Bernie Mac.

"Peaceful Warrior" is based on the memoir "The Way of Peaceful Warrior," by Dan Millman. Although he had it all, Millman couldn't shake the awful nightmares he experienced every night. He meets an old man who changes the way he sees life and learns a philosophy that stresses consciousness and spirit.

"Old Acquaintance" is a comedy about two childhood friends who both grow up to be authors, but very different people. Katharine "Kit" Markham has an affair with a younger man while divorcee Mildred "Millie" Drake is struggling to control her teenage daughter, Deidre. Eventually the women learn they are more alike than they think. The play opens June 28 at American Airlines (Selwyn) Theatre.