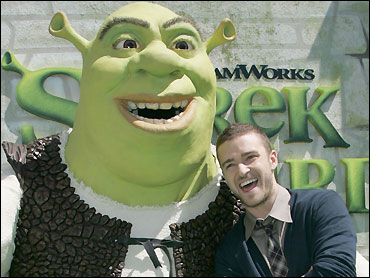 Get ready, kids, it's Shrek time! Fans of "King of Queens" will shed a tear as the series ends this week, but take heart: some great musicians and authors have new stuff for you to enjoy.

"Shrek the Third" is the latest in the hugely successful "Shrek" franchise. Cameron Diaz, Justin Timberlake, Eddie Murphy, Antonio Banderas and Mike Myers lend their vocal talents to the animated fairy tale spoof. In this installment, Shrek is about to become king, unless he can find a suitable replacement. The movie will be out May 18.

"Fay Grim" is the story of a single mother in Queens who worries her son will grow up to be no good like his absentee father, Henry. The CIA asks Fay to go to Paris to pick up some of Henry's property, when she learns the truth of Henry's life. The movie stars Parker Posey and Jeff Goldblum and will be out May 18.

"The Wendell Baker Story": Written and directed by Luke Wilson, the movie is about a nice con man who finds himself in jail and estranged from his girlfriend, played by Eva Mendes. He tries his best to turn his life around after he gets out and finds a job at a retirement hotel, where he must contend with the nasty head nurse, played by brother Owen Wilson. It opens May 18.

"Once," directed by John Carney and starring Glen Hansard, is a musical set in Dublin, featuring Hansard's Irish band "The Frames." It opens Wednesday, May 16.

"Brooklyn Rules" is written by Emmy-winner Terence Winter ("The Sopranos") and takes place during John Gotti's reign over the Mafia underworld. It's a tale of three friends whose different aspirations pose a threat to their bond. The film stars Freddie Prinze Jr., Scott Caan, Jerry Ferrara and Alec Baldwin. It opens May 18.

"Even Money" starring Kim Basinger and Danny DeVito and directed by Mark Rydell is a drama about nine people whose lives become intertwined though gambling and addiction. The film points out that addiction can strike anyone, no matter how perfect they seem. The movie opens May 18.

"Way Off the Road: Discovering the Peculiar Charms of Small Town America" is Sunday Morning contributor Bill Geist's book about his 20 years with the show. It looks back on some of the most interesting people, places and things he has encountered.

"Invisible Prey" by John Sandford is the author's 17th novel featuring Minneapolis Det. Lucas Davenport. This follow-up to 2005's "Broken Prey" is about a case involving a state senator who is under investigation for having sex with a minor, which converges with the murder of a rich widow and her maid.

"Falling Man: A Novel" by acclaimed author Don DeLillo explores the post-9/11 world through the characters DeLillo first introduced in his 1977 book "Players."

"The King of Queens" ends its nine-season run with a one-hour finale, which will answer the questions: Will Doug and Carrie Heffernan become parents, divorce or both? And will Carrie's father Arthur get remarried? Kevin James and Leah Remini star as the Heffernans, with Jerry Stiller as Arthur. The show airs Monday at 9 p.m. ET.

Photos: It's A Wrap!

A two-hour "American Experience" explores the legacy of Alexander Hamilton, perhaps the most significant person in American history who never served as president. The special airs on PBS on Monday at 9 p.m.

A new ABC series, "National Bingo Night," plays in-studio variations on the familiar game, while inviting viewers at home to participate for a chance to win prizes of their own. In each game, a contestant will race against the studio audience as "official bingo balls" numbered from 1 to 75 are randomly selected from a giant sphere in the "Bingo Plex" arena. The studio audience will track the numbers on their own bingo cards for a chance to win cash and prizes — and send the contestant home empty-handed. Meanwhile, viewers will also be able to join in by printing their own cards on the ABC.com Web site. The show premieres Friday at 9 p.m.

National Geographic's "Gabon: The Last Eden" is a show about one of the few places in the world where a human can stand on a pristine beach and, at once, behold elephants, hippos and humpback whales. Farther inland, mandrills and lowland gorillas inhabit the largest section of rain forest on the continent of Africa. But man continues to encroach on Gabon. The National Geographic Channel documentary airs Friday at 10 p.m. and is narrated by Glenn Close.

2"Pan's Labyrinth" is the critically-acclaimed movie about the imagination of a young girl living in fascist Spain. Directed by Guillermo del Toro, it won three Academy Awards.

"Stomp the Yard," starring singers Chris Brown and Ne-Yo and Darrin Dewitt Henson, is the hugely popular movie about a stomp competition between two fraternities at a historically black university.

Story: A New Year, A New Album From Ne-Yo

Rap-rockers Linkin Park are back with their third album, "Minutes to Midnight." Legend Rick Rubin stepped in to produce.

"United Abominations" is the 11th album by metal band Megadeth and it has a decidedly political bent. In fact, the name is a play on "United Nations."

Cranberries front-woman Dolores O'Riordan takes a break from motherhood to record her first solo album, "Are You Listening," which is released this week.

"One of the Boys" by Gretchen Wilson is the "Redneck Woman" singer's third album.

"Passing Strange" opens May 14 at the Off-Broadway Public Theater in Manhattan. The musical comedy goes from L.A. to Amsterdam to Berlin and back to California with a young black Bohemian looking for himself.

"Gaslight" is an off-Broadway production at the Irish Repertory Theatre which centers on a young wife tormented by her evil husband. A police inspector tells her that her husband is plotting her demise. The play opens May 17.

"Phallacy" is award-winning playwright Carl Djerassi's latest play which explores the tension between art and science when an art history professor takes on a chemistry professor. The play opens May 18 at the Off-Broadway Cherry Lane Theatre.