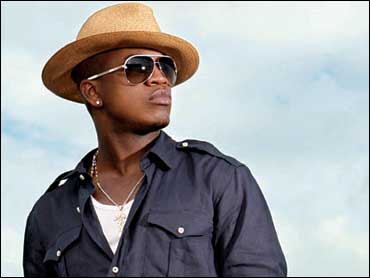 R&B singer Ne-Yo is up for two Grammy awards on Sunday which he says is "the icing on the cake that was 2006." His debut album "In My Own Words" went multi-platinum and as he works on his sophomore follow-up which is due in April, it looks like 2007 will be another great year for the artist.

The ShowBuzz recently caught up with the sought after songwriter who is working on Britney Spears and Whitney Houston's comeback albums. He says if Grammy doesn't shine on him tonight, "I can't really be mad at that."

2006 was your year. How does it feel to be nominated for two Grammys?

Ne-Yo:"Absolutely exciting. A really blessed year. That was definitely the icing on the cake that was 2006, it was an absolutely blessed year from start to finish. No disrespect to any other award but I think that the Grammy is more prestigious, that's the trophy to the football player, that's the ring to the NBA player. That's the main one. Honestly, to even be nominated amongst everybody, somebody recognized me, that's huge to me. I can't really say that I'm in creditbly concerned about walking home with the little statue. Just because some of the people that I'm in the category with, the chances of me getting it are kind of slim to none…if I don't win, I can't really be mad at that."

You're also starring in a hit movie, "Stomp The Yard." Tell me about your character Rich Brown.

Ne-Yo:"He's kind of the comedy relief type guy … I'm pretty sure everybody knows a guy like this when they were in college. Doesn't take much of anything serious, it's all about clothes and girls and parties, you know he's that guy. Then he joins a fraternity and he then, for the first time in his life, he starts to take something serious. Something becomes important to him."

So, he likes 'clothes, girls, and parties,' does that relate to your life in anyway?

Ne-Yo:"No, no, not at all … I'm a workaholic. No, I'm kidding. There's some aspect of Rich Brown in Ne-Yo, but you know rich brown is that 24-hours a day, I can't be that 24 hours a day because I have a business to run. It can't be fun and games all the time."

Do you plan to do more acting?

Ne-Yo:"Oh sure. There's nothing set in stone as far as when or what. But there have been a few scripts thrown my way since "Stomp the Yard." I've definitely caught a small taste of the acting bug. I definitely plan on doing some more, it's just got to be the right time. I have a whole new respect for this acting thing but music is always, always, always going to be number one for me. I've been mainly focusing on putting this second album together, and writing for a few different people. So that's been the main focus, so whatever acting thing I do, would have to make sense with my music so that the two don't bump heads."

Where are you working on your album?

Speaking of Barbados, a blog recently featured a video of you on the beach in Barbados frolicking with a with a woman in the water. Who was that?

Was she someone special?

Why did you head to Barbados?

Ne-Yo:"I went down there originally to do some writing for Rihanna. I knew that there were a couple songs that I needed to cut for my album too. So I was planning on coming here to New York after I got finished working with Rihanna. But the guy that owned the studio that we were working at. I became really cool with him, and he said you guys are more than welcome to use my studio for whatever it is you're trying to do. So, me and my management we figured its about to be really, really hectic, once these singles come out, so we might as well take this kind of, sort of opportunity to have a little vacation now while you're recording the songs, so I decided to stay out there an extra week, do a little recording for myself and get a little sun.

Lots of women want to know, do you have a girlfriend?

What can your fans expect to hear on your sophomore album?

Ne-Yo:"Strong melodies, quality lyrics but I think over this past year, I've definitely grown as an artist, as a writer, as a person. With just the different experiences that have come with the success of my first album. Man, I've done more in the last year than in half my life. Going overseas to this country, to that country. Experiencing this culture, that culture. Whatever the case may be, plus on top of the fact that there's more to me than just R&B. I'm a lover of music as a whole. There's some alternative in me somewhere, there's some country and western in me somewhere, there's some big band in me somewhere. I think that on this second album you'll hear some of the other facets of my personality will definitely be shown but not to the extent where people don't know it's me anymore."

You mentioned country and western, are you a fan?

Speaking of that song, how were you able to capture a woman's perspective so clearly?

Ne-Yo:"I grew up in a house full of women, from the day I was born to pretty much age 16 and 17, I was surrounded by women, my mom , my sister, my auntie, my grandmother. Just being around them for that long, you pick up on certain things. The aura and a vibe and the intuition of a women, it's contagious a little bit. Due to the fact that I was there, any situation that they went through, I went through it with them. To undeserving boyfriends, to cheating on the guy that could be the one, but for whatever reason can't control the urge to cheat. So, I may have a little more insight than the average guy on the mind of a woman, but that's not to say that I know anything about women at all. I wouldn't even sit here and try to lie about that. But I think in the end it all made for great song lyrics, I'll say that much."

Are your songs inspired by events in your life?

Ne-Yo:"Absolutely. Pretty much every song I write for the most part is inspired by something that's happened to me. Everything that went on in 2006, I had a whole lot to talk about."

Ne-Yo:"It's not easy. You definitely need somebody there to guide you, as opposed to what to say, what not to say. Which is why I'm working so closely with her A&R people. They talk to her everyday. They are the one's who, I'll give them a song, they'll play it for her, then they'll give me feedback."

Are you writing songs for Whitney Houston's new album?

Ne-Yo:"I haven't started that yet, I'm about to do some stuff for her. That's somebody that I definitely want to sit down with before I start writing for her. Just like Britney, there's a lot of things that have happened in her life, from her last album to now. Maybe there's some stuff she don't want to talk about, maybe some stuff she does, I just really want to make sure I'm not stepping on any toes when I go in with that one. Sit down like two people and have a conversation. That's all it really takes."

Do you think there will be songs about her break up from Bobby Brown?

Do you think she can make a comeback?

Ne-Yo:"I think it's possible. I think that people are allowing these people's personal lives to interfere with what it is that made us love them. Which is their music and their entertainment. A person's personal life is their personal life, that's why I still love Michael Jackson. Don't have an opinion on his personal life. That is what it is. That's not why I like Mike, I like Mike because he is a ridiculous entertainer. Not because of who he is as a man, I don't know him. I don't know him personally, so how can I judge him? All I'd have to go off of is what I've been seeing in tabloids. I don't go off of another person's judgment of that person. Until the day I meet Michael Jackson, he's a hero in my eyes because of what he's done musically. Whitney Houston, same thing, Britney spears same thing. Until I meet these people and make my own assessment of whether or not they have issues, then all I can go off of is what I know of them, and that's their music."

How do you decide if you're going to keep a song that you write?

Ne-Yo:"If a person comes to me and asks me to write a song for them, and I go in the studio with that person in mind, on that person's dollar, then whatever comes out of that session is there's. Now if I'm just in the studio writing on a whim and I come up with something fantastic then of course I'm going to keep it for myself."

Have you ever regretted giving a song away?

Ne-Yo:"Every song, once it finds its home it becomes what it's destine to become, regardless of whether I agreed with it or not, that's where it was supposed to go because that's where it wound up."

What do you like to do when you're not working?

Ne-Yo:"Spend time with my son. His name is Chimere, he's 16 months old. I definitely don't get to see him as much as I'd like to."
By Amy Bonawitz