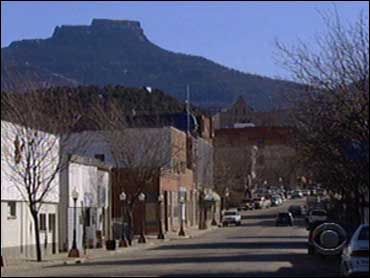 When people decide to make one of the most drastic changes in their lives, they often head to the most unlikely town you could ever imagine. Our Cover Story is reported by Seth Doane:

Trinidad looks pretty much like any small town. Home to about 10,000 people, it's tucked in the Rocky Mountains of southern Colorado.

It's the kind of place where the day's highlight might be a game of hoops, or perhaps a loaf of freshly baked bread.

Once a stop along the old Santa Fe Trail, Trinidad's always been on the frontier.

Mayor Joe Reorda says it's a "live and let live" kind of place.

"I'll tell you what - I could walk into any house in this town, if I needed a thousand dollars, if they didn't have it, they'd find it someplace to give it to me. That's the kind of town that we are - we take care of each other," Reorda said.

As a local doctor it's Marci Bowers' job to care, but she's not your typical small-town doc.

"She's a boon to this community," said Trish Keck.

Radio announcer David Phillips said of Bowers, "In town people know her, like her, see her interact with her. But really, they don't treat her any differently than any other doctor you'd see in town at the grocery store."

So what's so special about Doctor Bowers?

"It was just interesting," Bowers told Doane, "because everyone thought, 'Oh, how cute. We have a lady OB-GYN moving into town. How sweet.' You know? And little by little - you know, some of these media things happened - people began to find out about me. And it was like, 'Oh, well, that's interesting.'"

"Gender is from the shoulders up," she said. "It's what you think of yourself inside. So the hard part and the discomfort and the reason why people pursue hormones and surgery is [when] those two things don't match."

And now today she performs that very same surgery on hundreds of patients every year, right here in Trinidad.

But this story doesn't begin with Marci Bowers. In 2003, she took over from Dr. Stanley Biber who started the nation's first private practice for gender reassignment surgery back in 1969.

"He would educate little by little," Bowers said. "And people would meet transgendered people one by one. And pretty soon the town came to realize that, you know, we were helping these people. And they were in turn providing an economic stimulus to the small community."

And so Trinidad, Colorado came to be known as the "sex-change capital of the United States."

In fact, when folks like us come around, townspeople like Pastor Dick Valdez confess it's kind of "been there, done that."

"Well, let's put it this way: Valdez told Doane. "I heard that you were in town yesterday. And, you know, it immediately clicks, 'Well, they're gonna be doing the transgender reassignment whatever deal again.' And it's like, 'Okay, we've had Geraldo here, and we've had Oprah here, you know? I think we get a little tired of that being our claim to fame."

Still, for some, it's a very big deal. In fact, for about 300 Americans every year, Trinidad is a destination that's part of a life-long journey.

(CBS)
It is for this woman. We'll call her Lynn (see here with Dr. Bowers). When we met her on the eve of her sexual reassignment surgery, she viewed it as a turning point so emotional, so scary, she wouldn't let us show her face.

"It got time to the point where it was either suicide or surgery, suicide or transition, really. It got down to that point."

"That was the choice?" Doane asked.

"I could not ignore my feelings anymore."

For years, Lynn says she tried to numb the pain by abusing substances, even cutting herself.

She's come all the way from the East Coast believing that this surgery may offer some answers.

The next morning, Doctor Bowers prepares for the procedure. As you might expect, it's complicated, controversial, and incredibly costly.

Though estimates vary widely, it's estimated roughly 1,000 people undergo sexual reassignment surgery every year, despite the price tag of about $18,000 dollars.

For Lynn, like most Americans, it's not covered by insurance.

Dr. Bowers said there may be as many as 25 doctors in the U.S. who have ever done such surgery. "But in terms of one who [does] them on a regular basis, I would say, fewer than six."

After a few days of recovery, most patients will return home.

But a few others, like Michelle Miles, will remain.

"You know, Trinidad was a place that has a lot of lore for a transsexual," she said. "I mean, this is where modern transsexual surgery in the United States was born."

Once an investment banker in New York City, Michelle was Michael Miles. She traveled to Trinidad for the surgery, and says she stayed for the peace and quiet.

"I think there's some legacy of this rugged Western individualism here where people just have a lot of respect for your choice in how to lead your life," she said.

But most, like Lynn, return home, where we caught up with her 3-1/2 months after the surgery to see how things were going.

This time, she was willing to let us show her face, and reveal her name: meet Rebecca Lynn Jamison.

Why did she decide to come out and reveal her identity?

"I'm not sure, really," she said. "It's just I'm not concerned about hiding, you know? I don't want to feel like I'm coming out of one closet and going into another by hiding my past."

A past, she says, that was incredibly painful ...

"There were times when I held a loaded pistol to my head. And I thought all I had to do was pull the trigger."

Rebecca is 37. She works for a large financial institution in the Southeast. For a long time she says she tried to hide who she really was, even joining the military - all, she says, in vain.

"Maybe if I'm just man enough, I can deal with this," she said. "I can push it aside. I can bury it. I can overcome it. I tried to do that. And it never worked."

So two years ago, Rebecca began living as a woman. In the transgendered universe, it's just one of the steps in a process called "transition."

"We're not all like Jerry Springer, like the show," she told Doane. "We're regular people just like everyone else. We're just trying to deal with a serious issue that quite often leads to suicide. We run the risk of losing family, friends, our children and even our lives just for trying to be who we are."

"You've had complications from the surgery," Doane asked. "Some of the recovery has been quite tough. Is it worth it?"

"Yes, it is worth it. I would go through this again even knowing what I know now. I know that complications are a risk. And for me, it was totally worth it."

Still, Rebecca confesses she worries that by speaking up, by showing her face, she might become a target for those who disapprove of what she's done.

Back in Trinidad, we asked Dr. Bowers about what she says to those who say, "This is immoral. You shouldn't be doing this. This is wrong"?

"I'm happy to let God be the judge of that," she said. "I'm pretty self assured in knowing that we are helping people."

(CBS)
Pastor Dick Valdez (left) agrees … to a point. How does he reconcile his religious beliefs with Marci Bowers' practice?

Still, for the most part the town of Trinidad seems proud of their doctor … and the cottage industry that's put it on the map.

It doesn't appear to faze locals a bit as we found out at a Tuesday night basketball game at Trinidad High.

"Do you ever hear about Marci Bowers and her practice?" she asked.

"I know her, I play golf with her sometimes. She's pretty good!"

In fact, a lot of folks in town seem to be telling the rest of us to, well, just get over it.

A woman serving coffee to Doane said, "You know, there are a lot of us in Trinidad working very hard to make the story of this town about more than sex changes."

"I think we all kind of in a way are fatigued by talking about it," Bowers said. "But obviously, there's a need. There continues to be a need because you know, until the world really understands, it's going to be an issue."