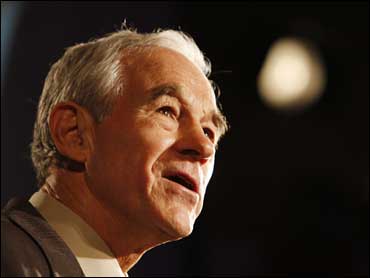 
Republican presidential candidate Ron Paul announced this week that he raised more than $5 million in the third quarter, a figure that put him in the orbit of Arizona Sen. John McCain ($6 million) and far ahead of Mike Huckabee ($1 million). [The former is considered one of the leading contenders for the Republican nomination, and the latter was identified by former President Bill Clinton as the only "dark horse that's got any kind of chance" for the GOP nomination.]

Not bad for a guy who has generally been treated as a fringe candidate whose only impact on the race would be as a punching bag for more legitimate candidates looking to score political points. For example, in one of the early Republican debates, former New York Mayor Rudy Giuliani attacked Paul for saying extremists "attack us because we've been over there."

Paul is far from a typical Republican presidential candidate: He has been against the war in Iraq from the outset and embraces a libertarian platform that includes dismantling the Department of Education. His support is largely Internet-based, with 70 percent of his donations coming online, according to Paul's communications director, Jesse Benton. His passionate supporters regularly bombard online news stories with comments on why Paul is the only candidate worth considering in the GOP field.

But Paul is little more than a blip on the national radar screen, coming in at just 3 percent support in a Washington Post-ABC News poll out this week. Despite his fundraising prowess, he remains a long shot to win the GOP nomination, and Huckabee dismissed Paul as "anything but" electable in an interview with CBS News this week.

"The Republicans are, frankly, divided up between nine or 10 candidates," said Huckabee. "Libertarians have one guy and they're fanatically loyal to him ... but it's not a Republican crowd, it's essentially either a Libertarian, in some cases, just an anti-war crowd."

Paul now has the money and name recognition to make an impact even if he doesn't get the Republican nomination, however. His campaign staff has grown from 10 to 40-plus over the past few months, and his team is now working on a second round of television ads. Benton says Paul had more than 30,000 donors for the quarter.

But Paul wants to do more than siphon votes from the bigger candidates in the GOP field. And if he is unable to become a legitimate candidate for the Republican nomination, he could potentially become the most serious and recognized presidential candidate in the history of the Libertarian Party.

Paul ran on the Libertarian ticket in 1988, and Libertarian Party Executive Director Shane Cory says he is welcome to seek the party's nomination this time around. "It was fantastic to see that wide support (for Paul)," said Cory. "It's a positive sign for the Libertarian Party and for liberty in general." Cory said his party does "not want to ride Paul's coattails," but noted that he is encouraged by Paul's success. He says if Paul continues running as a Republican, he hopes "some of his integrity rubs off on his opponents."

There is a potential stumbling block to Paul jumping to the Libertarian ticket: A number of states, including Paul's home state of Texas, have "sore loser laws" that prohibit a candidate who loses in the primary of one party from appearing on the ballot with a different party in the general election. "If Paul were to seek our nomination, he'd have to make sure his name wasn't on those ballots," said Cory. "It would not disqualify him from being our candidate, but would weigh heavily on the minds of our delegates."

Paul has repeatedly said that he will not run on a third-party ticket; this week he told CNN's Wolf Blitzer that "the system is so biased against a democratic process of allowing competition. You know, we can't get in the debates, it's hard to get on ballots."

"He has run as a third party candidate before," said Benton. "You spend half your time and two-thirds of your money just getting on the ballot. In his mind, the only type of candidate that could run a successful third party campaign would be a very, very wealthy person that could self-finance."

"You never say never, but it's 99.9999 percent," added Benton. "It's as close to absolute as possible."
By Brian Montopoli