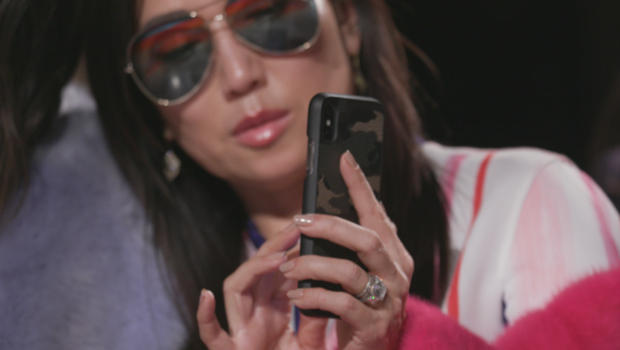 More and more followers of fashion appear to be "under the influence" of a new breed of opinion-maker, and big fashion houses are taking note. Alina Cho is charting the trend:

But sitting just across the runway from Wintour was Tina Craig, part of a growing army of social media stars known as "influencers."

"What I do is, I basically am just your friend next door.  I'm your girlfriend. But I have this access that you want," Craig said.

"I think they don't call 'em influencers for nothing," said Alex Bolen, the chief executive of Oscar De La Renta. "It would not be an exaggeration to say that our handbag business has taken off through our engagement with the influencer community. Our production has doubled."

Tina Craig is part of the new fashion establishment -- internet celebrities who get paid for showing off what they wear and how they live.

Craig and Bryan Yambao (known to his fans as Bryanboy) were among the first influencers. Bryanboy is also among the most outrageous.

"It took time to get validation," Yambao said. "You know, it was hard for me to get into the shows. I would often get rejected by houses where I would request them."

Now, Bryanboy sits front-and-center.  He got his first big break in 2008 when designer Marc Jacobs created the Bryanboy handbag. "He emailed me and said, 'You know, Bryan, I'm gonna name a bag after your honor.'"

Cho asked, "What did you think?"

What started with Marc Jacobs is now a full-time, richly rewarded career. Bryanboy now works with Gucci, Prada and Calvin Klein. When asked how much he earns, he replied, "It's six figures, yes."

"It hearkens back to the days of, I don't know, back in old Hollywood, when there were screen magazines and people would look at them and say, 'Oh, well, I have dark hair. I want to look like Ava Gardner,'" said Kors.

"I think that influencers are that today."

"These people aren't evil," he said. "They're not bad people, and many of them are talented as stylists or photographers.

"[But] they don't even know what a standard is. I know this is a very negative view, but it's because I believe so wholeheartedly in what it is that magazines have represented culturally in America and what they still do."

"So, what is it that they do that influencers do not?" asked Cho.

She's so popular, she now has an agent, and has turned an extra bedroom into a makeshift Hollywood studio.

Perkins said, "Before, if you had wanted to get your foot in the door somewhere, you had to know somebody. And now it's, you're at home with a camera."

Estee Lauder, the beauty behemoth, took notice, and has paid Perkins to appear in videos and promote products on Instagram.

You could call John Demsey, a top executive at Estée Lauder, a satisfied customer. "People show the money when they see the results," he said  "And there's no question that [Perkins], and people like you, are the new media stars."

"You're gonna make me cry here on camera!" Perkins said.

Cho asked Demsey about Estée Lauder's social/digital marketing budget: "Is it safe to say 30 percent of your ad budget goes toward [influencers]? 50 percent?"

Influencers are now so plentiful, and powerful, that the federal government has begun requiring them to clearly identify who's picking up the tab.

But Desi Perkins insists her views are not for sale. She said, "I always have them send me products so that I can try it out before I say 'Yes' to the partnership. Because if I hate something, I'm not gonna tell people I love something."

By the year 2020, Ad Week magazine says influencer marketing will be a $10 billion industry.

Perkins told Cho, "I want to have an empire. I want to find the next step of creating something big for myself."