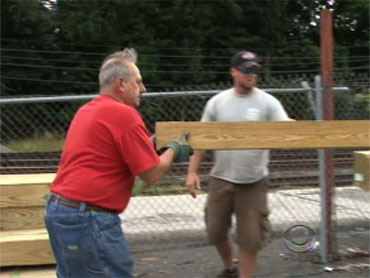 Under current law, the normal retirement age -- the age at which full retirement benefits are payable -- is already scheduled to increase from 66 to 67 in two-month increments from 2017 to 2022.

Joe Bergola, 62, has been putting his back into it for nearly 40 years, reports CBS News correspondent Anthony Mason.

"This job involves a lot of bending," said Bergola. "Year in and year out just too many aches and pains."

According to a new study, one in three Americans over 58 is working at a physically demanding job. Many, like Bergola, look forward to retiring with full social security benefits.

"I have two sons and I have two grandchildren and I just want to spend more time with them," said Bergola.

But with 70 million boomers at or approaching retirement, many are worried that social security is at risk of long term insolvency.

The White House has created an 18 member panel to look at changes, including increasing retirement age.

"We will soon have a system in which close to 1/3 of the adult population will be retiring for about 1/3 of their adult lives on social security," said Eugene Steurele, an economist at the Urban Institute.

House minority leader John Boehner is in favor of retirement starting age at 70.

"Eventually getting the retirement age to 70 is a step that needs to be taken," said Boehner on the Pittsburg Tribune Review website.

Not so fast, say critics.

"Raising retirement age is a bad idea because it cuts benefits for people who need them the most," said Teresa Ghilarducci, economist at The New School.

In fact, the new study says groups most impacted by a higher retirement age are the very ones social security was originally designed for: low wage earners, less educated workers, those in poor health or in physically strenuous jobs.

"If they force me to work till 70, I'll probably die before I get any social security," said Bergola.

At this point Bergola will tough it out until he gets full benefits at 66.

But working longer can be debilitating for all groups. 29 percent of workings age 55 to 60 said they experienced chronic pain in their jobs, and 46 percent said they had arthritis, according to the Bureau of Labor Statistics.

"We're forgetting that many of the reasons people live longer is that they're able to retire earlier," said Ghilarducci.

The proposed changes will likely effect people who are at least 20 years from retirement, so for Joe Bergola, days spent spoiling his grandchildren are only a few years away.

He lost his vision at 7, but went on to become the starting quarterback