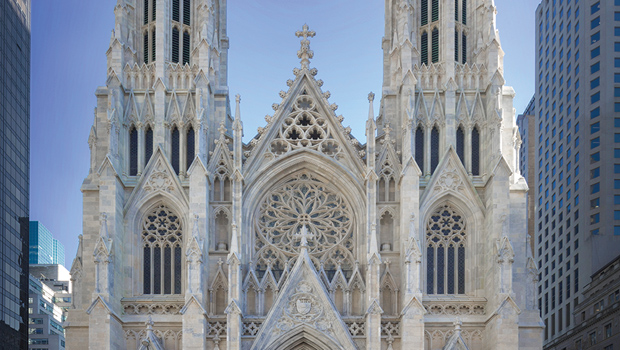 Pope Francis saw the truth of the saying "What's Old Is New" when he visited St. Patrick's Cathedral in New York this past week. And now, with Mo Rocca, we can, too:

Every Sunday morning in New York, the bells of St. Patrick's echo through the city, beckoning Catholics and non-Catholics to the Cathedral's massive bronze doors.

And there is a lot to see. A neo-Gothic landmark, St. Patrick's is bathed in natural light through a prism of stained glass -- an expression of uplift and hope deeply-rooted, says New York's Cardinal Timothy Dolan, in the American experience. "Almost all of the great ethnic parades -- Columbus Day, the Steuben Day Parade, the Puerto Rican Day Parade -- begin with mass here at St. Patrick's, St. Patrick's Day, of course, being the biggest!"

It was the flood of Irish immigrants in the middle of the 19th century that gave birth to St. Patrick's Cathedral. Fleeing famine and persecution, Irish Catholics were met with hostility here in America. But they found a champion in Archbishop John Hughes.

"His nickname was 'Dagger John,' because he would stand up and defend the rights of his people who were very poor and were very forgotten," recounted Dolan. "And he said, 'We want to make a statement: I want to build a cathedral of suitable magnificence to make the statement Catholics have arrived; they are at home.'"

To build St. Patrick's, the archbishop turned to James Renwick, Jr., designer of the Smithsonian Castle in Washington, D.C., and considered the premier American architect of the time.

It took more than 25 years of mostly immigrant labor to realize Renwick's vision, and when its twin spires were completed in 1888, St. Patrick's stood as the tallest building in New York City.

"Isn't that phenomenal?" said Dolan. "And we're still proud of its grandeur and its size."

But after years of neglect, the Cathedral was showing its age. "This Cathedral, simply put, is cracking," the Cardinal said before his congregants. "The bricks are crumbling and falling."

Which is why in 2012 Cardinal Dolan announced a restoration of St. Patrick's, at an eye-popping price tag ($175 million) at the same time that parishes and schools are being closed. "Here's the only answer I can give: We had to do it. It was survival," said Dolan.

Architect Rolando Kraeher, of the firm Murphy, Burnham & Buttrick, was charged with overseeing the daunting task.

Kraeher noted that the Cathedral is constructed from Tuckahoe marble: "Tuckahoe marble is a beautiful, wonderful stone, but it's very soft. And we found some areas where the stone, to the touch, it would pulverize in your hand."

Some 30 stories of scaffolding was erected outside and inside, allowing tradespeople access to every inch of this massive structure, to clean and re-leaden panes of glass; restore more than 9,200 organ pipes; and remove soot from the Cathedral's 19 chapels, including its most popular, Our Lady of Guadalupe.

"She was just added as a gift from the Latino immigration," said Dolan. "Now this shows a continued presence and gift of the immigrants who have always found a spiritual home at St. Patrick's."

Just as the original laborers and artisans had done, the restoration work was performed largely by hand, and by a new generation of immigrants, like Peter Cuffy.

"Exactly, exactly," said Cuffy. "I have to try and make it look exactly as they had it."

Dolan said, "I have come over here and watched them with toothbrushes to get into some of the nooks and crannies of the marble."

The restoration process has taken three years. And like any building of its age the cathedral has its secrets.

"You stand underneath it and you say, 'Oh my God, how did they build this Cathedral out of stone?'" said Kraeher. "Then we started working on it and we go up to the attic, we realize that it is not stone!"

To save money after the Civil War, the whole upper half of St. Patrick's was constructed of wood and plaster; it only looks like marble.

One hundred feet above the altar, project engineer Keira Brady showed Rocca the ceiling -- plaster painted to look like stone. "And they line it with the gold paint so when you're standing on the floor, it looks as if it's stone."

There have been some sobering discoveries as well, like the markings left by firefighters on the walls and windows of the Cathedral's south spire.

"When the firemen come to inspect it up there, they would carve their names," said Dolan. "And when we were doing the restoration, they thought, 'Should we cleanse all of these and sand these out?' And we said, 'Absolutely not.' Particularly because before 9/11 when the firefighters came here for the inspection, they carved their names in, and those men lost their lives."

Also kept within the cathedral are many of the church's past leaders, in the crypt below the main altar, including the remains of Archbishop John Hughes, and the man known as "the Catholic Billy Graham," the Emmy Award-winning Bishop Fulton Sheen.

"He's the most popular preacher we've ever had," said Dolan. "Milton Berle used to say, 'How do you get better ratings than me?' And Fulton Sheen said, 'I got better writers: Matthew, Mark, Luke and John'!"

Pope Francis' journey to St. Patrick's on Thursday marked the fifth time a pope has come to the Cathedral. No other church outside of Italy has hosted more papal visits -- a tribute to America's parish church, now restored to its original luster.