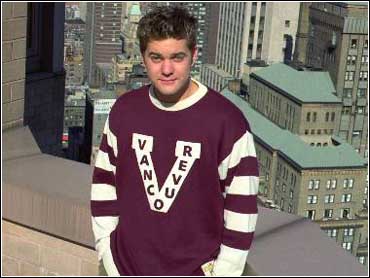 This week, John Leonard reviews the new movie The Skulls and discusses that secret society at Yale University that counts George Bush the elder and George Bush the younger among its ranks.

Most of what we think we know about Skull & Bones - the secret society at Yale to which George Bush and his son "W" belonged, along with Henry Luce, Henry Stimson and Henry Cabot Lodge, plus McGeorge Bundy and Strobe Talbot - we learned from an article in Esquire in 1976 by Ron Rosenbaum.

And Rosenbaum, who went to Yale himself but who seems all right otherwise, got most of his information from former bonehead girlfriends who objected to a ritual requiring these young men to lie down in coffins and talk about their sex lives.

So beans were spilled about the tomblike citadel on High Street, the cult bonding and fratboy protocol of leaving the room if the society were so much as mentioned, and a Masonic mumbo jumbo that goes back at least to the Bavarian Illuminati, perhaps to the Knights Templar, possibly all the way to ancient Greece. Rosenbaum returned to the subject a couple of weeks ago in the New York Observer, when he couldn't get into a preview screening of the silly new movie called The Skulls.

The Skulls starts out smart, but gets dumber as it goes along. Joshua Jackson, a working-class scholarship boy but a top athlete, needs to be tapped by Skulls so he can pay for law school. This means waiting for a midnight phone call. After which, with Paul Walker, he must steal a snake. Then, like a bunch of cows, they will be branded. Finally, in a cage instead of a coffin, they confess.

All this seems worth it, because Craig T. Nelson will supply them with girls, boats and cars. But a non-Skull friend is murdered. And suddenly Joshua - not to mention his very blonde blueblood girlfriend, Leslie Bibb - is on the run from a cabal of elderly power-mad oligarchs.

Now, I've been thinking about Skull & Bones ever since, a decade ago, the undergrads voted to let in women and the alumni changed the locks. I was going to reveal the kinky initiation rites of the Bavarian Illuminati. I'd explain the 700-year-old plot of the Knights Templar to seize contrl of the Earth's magnetic poles.

I'd wonder why there hasn't been a secret society for women since the Eleusinian mysteries, when they got together to feel bad about the abduction of Persephone. But then something happened.

What happened is a brand-new book called The Cultural Cold War: The CIA & the World of Arts and Letters. Frances Stonor Saunders tells us the appalling story of how an elite bruderbund of Ivy League Whiffenpoofs, a patrician class of derring-doers, set up dummy foundations to purchase half the intellectuals in the West by starting highbrow magazines like Encounter in half a dozen nations; by subsidizing book publishers, youth festivals and all-expenses-paid international symposia; by persuading Henry Luce at Time and Bill Paley at CBS to let their reporters get cozy with covert agency operatives. She names hundreds of names.

All this probably seems quaint now that women are admitted into Skull & Bones, and intellectuals, stampeding over one another to get to an Op-Ed parking space or a yak-show TV camera, sell out their skepticism and their first-born children to the highest bidder straight out of nursery school.

But it's a lot scarier than a movie like The Skulls. Do you wonder why the rest of the world simply assumes our traveling journalists, novelists, scientists, labor leaders, even our exchange students, are agents of the American government?