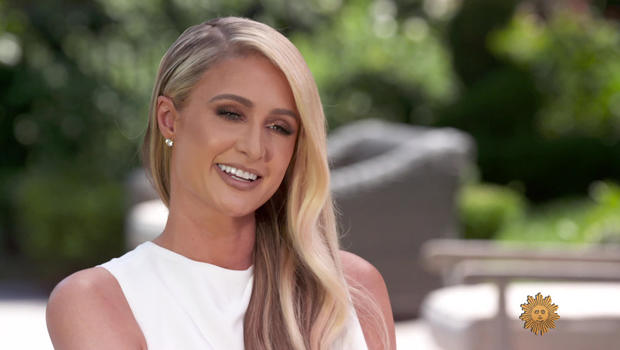 By now, you probably think you've seen everything from, and about, Paris Hilton: the socialite who made a career out of being a dumb blonde, a reality TV star famous for being famous, a Barbie-doll voice with nothing to say.

That persona, she now says, was all an act.

Correspondent Tracy Smith asked Hilton, "What do you think the difference is between that character that you created and the real Paris?"

"There's so many differences," she replied. "With the character, it's mostly kind of this blonde, bubbly, kind of Barbie airhead. And in real life, I'm the exact opposite. I'm not a dumb blonde, I'm just very good at pretending to be one."

And these days, she's talking about a new film, "This Is Paris," that describes a time in her life that she says was too painful to bring up, until now.

Smith asked, "With all that's going on in the world, do you worry that people are gonna say, 'Oh, come on, with everything that's happening, should I really care about Paris Hilton?'"

Paris Hilton, heiress to the storied Hilton Hotel legacy, was born to wealthy but working parents, Richard and Kathy. She said they were strict – no makeup or dates allowed. But as a teen, Paris had a wild streak, so wild that, back in the '90s, mom and dad sent her to a series of "behavior modification" schools.

"How did your parents get to the point where they thought that that was the answer? What were you doing?" Smith asked.

"I wasn't really doing anything, I'd just moved from L.A. to New York, and that's when my life completely changed," Hilton said. "Basically I was just sneaking out, going to clubs, and not going to school and ditching class. And that's when my parents thought it was time for me to go away."

So, in 1998 then-17-year-old Paris wound up at the Provo Canyon School in Utah, a place for treatment of young people with mental and behavioral challenges. But in "This Is Paris," she describes the place as more of a prison camp, with solitary confinement and physical abuse.

She said the staff made an example of her, and choked and hit her. "It's so weird to think now, 'cause I buried this for so long with my emotions," Hilton said. "So, now to think about it, what happened, it's so weird for me to even be like, how is this really real?"

"Sunday Morning" reached out to Provo Canyon. In a statement they said, in part, that "Provo Canyon School was sold by its previous ownership in August 2000," and they therefore "cannot comment on the operations or patient experience prior to this time," and also that they "do not condone or promote any form of abuse."

Hilton said she never told her family about her experience there, but suffered nightmares for years afterward.

In the film, Kathy Hilton said, "She would say things to me after – 'I still have nightmares, still in the middle of the night,' she would say that – and I always take what people say with a grain of salt. Like I think, 'Yeah it did bother her, but it was our way of saving you.'"

Smith asked Paris, "Why not tell them when you got out?"

"When I got out, I was just so grateful and so happy to be free that I just didn't even want to bring it up," she said. "It was like, I'd rather, you know, just never talk about this, just don't think about it. And from the moment I stepped out of that building is when I decided I'm never telling this story to anyone, ever."

'You thought you'd never tell it?"

"No. And I didn't think they would believe me. Because even hearing myself talk about it, it sounds impossible to believe."

After she left the school, Hilton said, she tried her best to forget it:  She was a fixture at every high-profile event, and she got famous for all the wrong reasons, like a 2003 sex tape scandal that made headlines.

Smith asked, "The sex tape happened after the school; is there a connection there?"

"That would never have happened if I hadn't went to that school," she replied.

"You don't think the sex tape would have happened?"

Why not? "I just feel when I got out of that school, I was so lost," Hilton said. "And then I ended up meeting the person who did that. And I never would have let someone like that in my life if I hadn't went through such experiences, and therefore I would never have put myself in that situation.

"But I just wanted love so bad. I didn't really know. I was so naïve. And I trusted the wrong person. And that's something I'll regret for the rest of my life."

But despite what she's been through – or maybe because of it – it seems Paris is having the last laugh: She founded her own fashion and merchandise empire, and is reportedly worth about $300 million, a fortune built on self-promotion.

"You're like the patron saint of the selfie culture, really," Smith said.

"So, do you feel pride or guilt about that?"

"A little bit of both," Hilton said.

She's lived so much of her life on camera that people think they know her. But at 39, Paris Hilton says she finally knows herself.

Smith asked, "You said you feel like you've been a kid for so long? In what sense? Explain that to me."

"I've always been a kid at heart. And I never really wanted to grow up. That's just how I was for so long. Maybe because I didn't really get to have a childhood.

Ashton Kutcher on his struggles with vasculitis: "Suddenly, you can't see"
More
Thanks for reading CBS NEWS.
Create your free account or log in
for more features.
View CBS News In
CBS News App Open
Chrome Safari Continue
Be the first to know
Get browser notifications for breaking news, live events, and exclusive reporting.