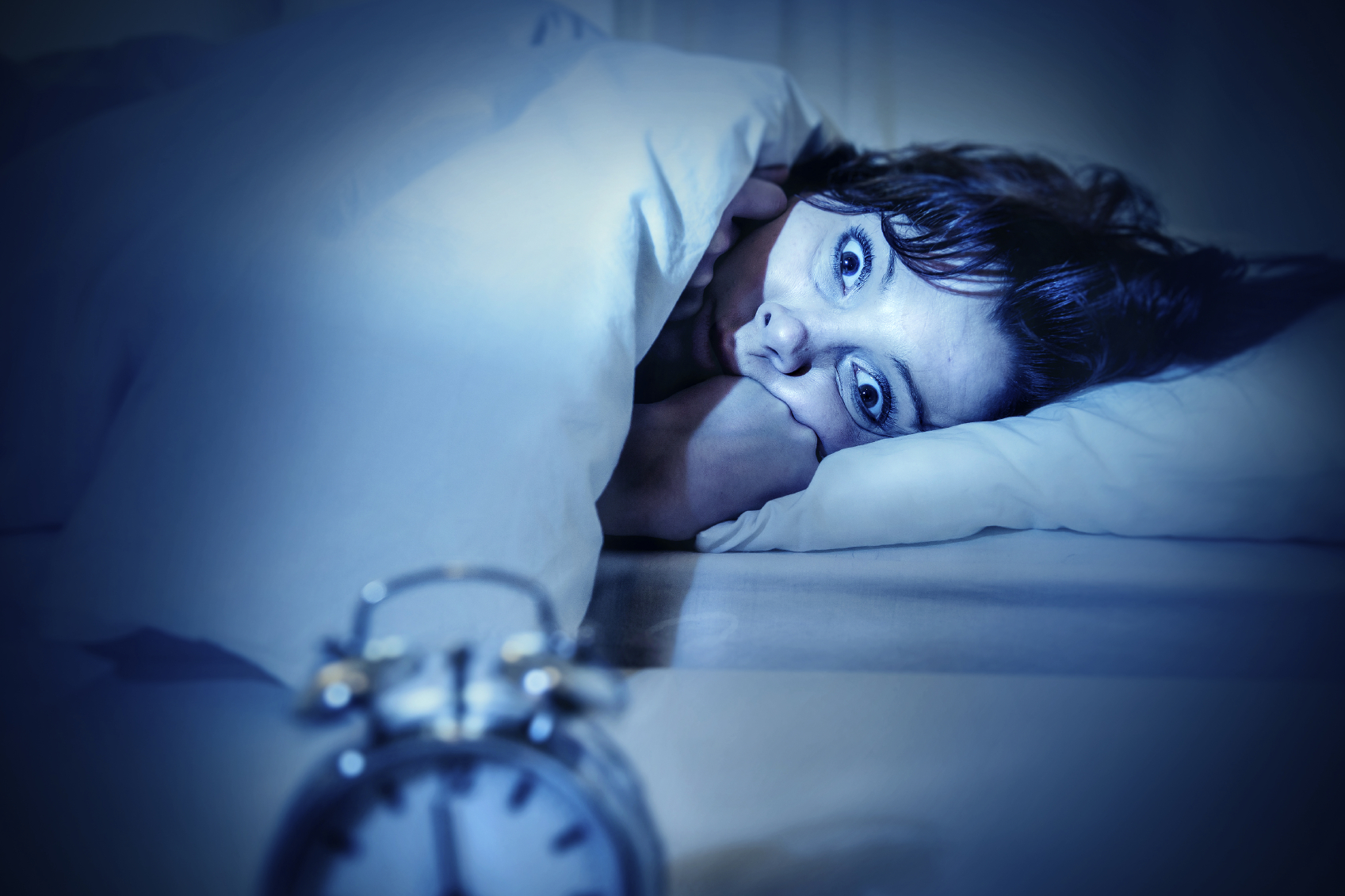 You wake up in the middle of the night unable to move a muscle. Panicked, you feel a presence in the room and see the image of a ghost or a demon gliding toward you. The figure approaches you, sits on your chest and puts its hands around your neck. You actually feel it strangling you and you try to scream, but you can't even open your mouth.

This may sound like something out of a horror movie, but it is an actual phenomenon many people describe experiencing. Though the ghostlike figures aren't real, the physical sensation and fear are genuine. Experts say it's a typical episode of sleep paralysis.

The condition is defined by the inability to move or speak while falling asleep or upon waking, and usually lasts for a minute or two. It is sometimes accompanied by hallucinations that are essentially projections of dream imagery. Many who suffer from it describe feeling heaviness on the chest and the overwhelming sensation of another presence in the room. The combination produces the terrifying feeling of a real-life nightmare.

"During REM sleep, the muscles are actually, literally paralyzed. Usually you're not aware of it because you're aware of whatever you're dreaming about. Putting it simply, it's that your brain has woken up but your body hasn't," he told CBS News.

Those who experience sleep paralysis can see that they are still in their bedrooms, he said, but they can't move.

In the documentary "Devil in the Room," people describe frightening episodes of sleep paralysis. "My bed was shaking and I felt like I was being strangled," one recalled. "The only thing I could move was my eyes, but I felt like there was a presence in my room," said another. "Pressure holding me down. Screaming and screaming and asking for help, but your mouth isn't moving." "There was a woman levitated in bed next to me."

"It's absolutely terrifying," French said. However, he emphasized that experiencing sleep paralysis is completely normal and has a scientific explanation.

"After a very vivid episode, you're going to think 'well, either I'm crazy or that was real,' and neither of those two alternatives are that great," he said. "But it's not real and you're not going crazy. We do generally know in scientific terms what causes it and I think that can be very reassuring."

How common is sleep paralysis?

Sleep paralysis tends to occur more often in people who have other sleep disorders, such as narcolepsy or sleep apnea, but it can happen to anyone.

According to French's research, about 30 to 40 percent of the general population has experienced sleep paralysis at some point in their life.

Brian Sharpless, Ph.D., an associate professor at the American School of Professional Psychology at Argosy University in Washington, DC, and author of the book "Sleep Paralysis," has studied the phenomenon in the U.S.

After analyzing a sample size of over 36,000 people from a variety of cultures and groups, he found that about 8 percent of the general population experiences sleep paralysis, with some groups at a higher risk. About 28 percent of students, for example, reported incidents of sleep paralysis, while 32 percent of people with psychiatric disorders such as depression or anxiety said they experienced it, as well.

This makes sense, as sleep paralysis is greatly affected by quality of sleep. "Any kind of disrupted sleep, whether it's because you don't have a regular schedule, you have jetlag, or you do shift work seems to make sleep paralysis more likely," Sharpless told CBS News. "Overall, I think it's much more common than people may think."

Sleep experts have known about sleep paralysis for years. It's been a recognized diagnosis in the American Academy of Sleep Medicine's Diagnostic Classification of Sleep and Arousal Disorder since its very first issue published in 1979.

But it's just starting to become more well-known in popular culture, as projects like "Devil in the Room" make their way around the Internet. Just last year, a hybrid film of documentary and horror about sleep paralysis called "The Nightmare" debuted at the Sundance Film Festival.

Descriptions of sleep paralysis can be found throughout history in cultures from all over the world.

French points to a 1781 painting by Henry Fuseli called "The Nightmare," which depicts a demon sitting on the chest of a sleeping woman, as perhaps the most famous historic example of a sleep paralysis depiction.

According to a 2008 research paper, a 17th century Dutch physician recorded a case report of a patient's symptoms that describes episodes of sleep paralysis, suggesting physicians have known about the condition for hundreds of years.

One theory suggests sleep paralysis may also have played a role in the Salem Witch trials. A 2003 paper quotes a possible description of sleep paralysis found in evidence used in the 1692 trials. Bernard Peach testified that one night, "he heard a scrabbling at the window, whereat he then saw Susanna Martin come in, and jump down upon the floor. She took hold of this deponent's feet, and drawing his body up into an heap, she lay upon him near two hours; in all which time he could neither speak nor stir."

Different cultures around the world have also come up with fables and tales to explain what happens during an episode of sleep paralysis.

"In all cultures, even in modern times, there are dozens and dozens of different words for sleep paralysis and different interpretations from different cultures," French said. "But again you look at the actual descriptions and clearly it's the same core phenomenon."

Folklore in Newfoundland describes the "Old Hag" who comes in the night and sits on the sleeper's chest and suffocates them. Japan has "Kanashibari," which is a nocturnal spirit attack.

In St. Lucia, the condition is referred to as "Kokma." "Their interpretation is that it's the spirit of unbaptized children that would come and try to strangle you while you slept," he said.

In more modern times, French said some people who experience sleep paralysis explain it by becoming convinced they were abducted by aliens.

"Of course, it may sound a bit silly to most people, but to these people it's very real," he said. "But what they're really describing is a typical sleep paralysis episode."

While research on the best methods to treat sleep paralysis is lacking, experts say the best way to prevent it is to practice good sleep hygiene.

"Getting the recommended 7 to 9 hours per night of sleep a night, making sure your sleep times are very consistent. People have a tendency to sleep deprive themselves on the weekdays then on the weekends try to sleep in," said Dr. Daniel Barone, a sleep expert at Weill Cornell Medicine and New York-Presbyterian.

Of course, for sufferers of sleep paralysis, this can often be difficult to accomplish. "One of the things that happen to people who get sleep paralysis is that they become frightened to go to sleep," French said. "And that disrupts the sleep cycle and that makes it more likely that it will happen. So it's really a horrible vicious circle."

Barone notes that treating the sleep disorders that can bring on episodes of sleep paralysis is important, and avoiding excessive alcohol, nicotine, and food intake before bed can also help.

While it's happening, it can be difficult to "break the spell" of sleep paralysis, but French said a lot of the patients he's spoken to have actually learned to recognize their episodes and a few have actually come to enjoy them. "Basically the way you enjoy a good horror movie," he said.

If that's not possible, there are some alternative strategies.

"Some people have reported that focusing on a small body part, like a finger or toe, and trying to wiggle it, is helpful," Sharpless said. "Trying to relax and tell yourself that it's sleep paralysis and those aren't really aliens in your bedroom can be a good way to talk yourself down. It may be helpful just to reassure yourself that it's a natural experience and that it's really nothing to physically worry about."