With all the reality shows that are out there, perhaps it's time for a REALITY CHECK. Jeff Greenfield reports:

It's a Saturday night in Hollywood and the paparazzi are out in force. But who are the celebrities that have drawn them? Movie Stars? Rock idols? Sports gods?

No, they are the men and women of "Survivor" - a television program (now a decade old) that changed television to its core.

The program that threw 16 men and women on the island of Borneo in May 2000, competing with and against each other for a million dollar prize, galvanized American viewers. Its first-season finale drew more than 50 million of them to watch the deciding vote cast between Richard ("the Snake") and Kelly ("the Rat").

"Survivor's" success spawned dozens of descendants in almost as many formats, most notably American Idol," where advertisers can pay up to a million dollars for a 30-second ad.

But producers also discovered a different audience appetite - a hunger to watch people with no discernible talent, no discernible insights, but who are willing, eager to be seen and heard doing . . . nothing. "Real Housewives" shopping, "Girls Behaving Badly" on the "Jersey Shore."

They also found audiences eager to watch, and participants eager to perform, in situations we once laughingly called "inappropriate."

How real is the reality craze?

By one estimate, one out of every four shows in prime time falls into this category, many of them ratings bonanzas. For NBC, which is mired in fourth place in prime time, its biggest hits are reality shows like "America's Got Talent" and "The Biggest Loser," where grossly overweight people compete to lose pounds - and win money!

One reason for their popularity is financial: an hour of reality can cost a few hundred thousand dollars, compared to the one to three million for a scripted drama.

But there's a more fundamental reason, says screenwriter-turned-academic Martin Kaplan, who teaches media at the USC Annenberg School for Communication.

"I think a lot of the appeal of these shows is that the producers and casting directors have figured out that we have reptile brains, and that there is stuff that we can't resist because of the species we are," he said.

Such as? "Humiliating, lurid things that happen get our attention. We gossip over the back fence. And since the television is an extension of the world that we live in, we can gossip about the people that we see there."

In July, the Discovery Channel drew one of its largest audiences ever to watch Captain Phil Harris, fisherman on "The Deadliest Catch," die - that's right, die - during the show's episode.

Usually the fates are kinder to stars of reality TV. Perhaps no "reality" figure has drawn more viewer attention than Omarosa Manigault. On "The Apprentice" in 2004, she fascinated - and appalled - viewers with her ceaseless conniving and backstabbing:

She lost that competition. But since then, Omarosa (she has ascended to the one-name status of Madonna or Cher) has appeared on some 20 reality shows. She's an author and political consultant. And she did it with a supreme self-awareness of what would make audiences remember her.

"A friend of mine said, 'The fabric of reality TV is conflict, so make sure that you're either in the fight, breaking the fight up, or starting the fight,'" she told Greenfield.

And that, she says, is exactly what the producers of these shows are looking for.

For programs like "The Apprentice," the competition is the point.

But what about shows like "Keeping Up With the Kardashians" or "The Real Housewives of Orange County"?

"What these shows are basically about is . . . the most mundane behavior. I mean, it's not about writing a symphony," said Mary McNamara, a TV critic for the Los Angeles Times.

"These shows are not about [the] dignity and quiet grace in everyday living. It's about a bunch of people who don't have any ambition beyond going out to lunch and owning things.

"There's nothing really to, you know, challenge your brain."

One longtime media figure who does want to challenge his audience is Dr. Drew Pinsky, a 25-year veteran of radio and television therapy. He presides over "Celebrity Rehab," where well-known public figures confront their addictions.

But when he talks about what he does, Pinsky is acutely aware that he is tapping into the worst instincts of his audience.

"The reality is, people only watch things that are dramatic," said Pinsky. "People are drawn to dysfunctional behaviors, but you have to use that desire to watch it to create opportunities to teach."

"I would say 'Jersey Shore' is really just sitting and passively consuming behavior that's really problematic, that's really potentially pathological, as opposed to showing what's behind that, what can be done about it," said Pinsky. 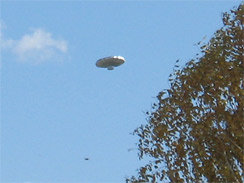 (Lisa Eklund )
At times, the hunger for the fame these shows bring can turn bizarre, as when the nation's television screens were filled with the story of a 6-year-old boy aloft in a balloon . . . a hoax designed to get the family on a reality show. But remember the couple who crashed President Obama's first state dinner last fall, in hopes of getting a reality show? It worked. They're both featured in "The Real Housewives of Washington, D.C."

Or, when an couple competing for a reality role crashed President Obama's first State Dinner.

And many participants on these shows sometimes display a strong, even desperate desire to maintain their 15 minutes of fame. And in fact, there is an after-life for the briefly famous . . . or notorious.

Marc Marcuse, who appeared on "Average Joe" in 2003, now runs Reel Management, which books more than 400 people from more than 50 reality shows. Some have stories to tell, like overcoming addictions. But for others . . .

"People just want to party with somebody famous, honestly," said Marcuse. "We'll do bar and club appearances where we come out and meet someone from 'Rock of Love,' and the door goes crazy. They get a line out the door because people want to meet these famous people."

For Omarosa, much of the criticism of "reality TV" is off-the-mark, or at least, simplistic.

"Were they bashing reality when we saved the industry during the strike?" she said. "Were they bashing us when people were flocking to their TV sets, flocking around the cooler, because 'reality' gave people a reason to watch network TV again? I'm a little defensive because we all get grouped together. I mean, they see no difference between me and Kim Kardashian. But it's not all the same."

Nor is it entirely new. Half a century ago, audiences got to vote on whose life was more troubled, on "Queen for a Day."

"I would like a special wheel cot bed for my paralyzed brother who's paralyzed from the waist down," said one contestant.

And contestants eagerly humiliated themselves for prizes on "Beat the Clock."

But the sheer volume, as well as the often jaw-dropping behavior of today's reality shows has opened another chapter in a very old debate: Can what we see and hear on television affect us for the worse?

"I think the danger is they're a toxin in the culture, that we can enjoy them up to a certain degree, but it's not possible to watch these shows and not be affected by them," said Kaplan. "It's fabulous to watch - witches are entertaining - but that stuff is nevertheless poison potion."

"I think if you eliminated reality TV entirely, they'd be no change," said Marcuse. "It's just a symptom of what people want, good and bad. It just reflects our society, nothing more."