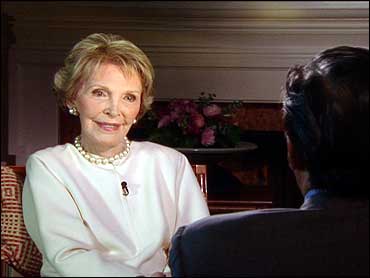 The couple first talked with Mike Wallace in 1975 at their ranch in California. Back then, Gov. Ronald Reagan had just announced he was going to run for president.

But today, they are a very different couple. Ronald Reagan, now 92, is in the advanced stages of Alzheimer's disease, and Nancy Reagan spends her days close to him at home.

In an interview that first aired Sept. 25, 2002, Wallace sat down with Mrs. Reagan to talk about her life, the president and the cruel disease that has stolen her husband.

"When people say, 'You have Alzheimer's,' you have no idea what Alzheimer's is," says Mrs. Reagan.

"You know it's not good. You know there's no light at the end of the tunnel. That's the only way you can go. But you really don't know anything about it. And you don't know what to expect."

In 1994, former President Ronald Reagan wrote a letter revealing that he had Alzheimer's disease: "Unfortunately, as Alzheimer's progresses, the family often bears a heavy burden. I only wish there was some way I could spare Nancy from the painful experience."

These are hardly the golden years for the Reagans. But when Wallace recently met with Mrs. Reagan again, he showed her some of that original 1975 interview that brought her back to the early glory days of their lives.

Those memories include the good times the Reagans shared on their California ranch, which Ronald Reagan called "Rancho Del Cielo" - or Ranch of Heaven.

In that 1975 interview, Wallace asked Mr. Reagan what would persuade him to leave the beauty of his ranch to run for office. "Someone once said, 'Life begins when you begin to serve,'" said Mr. Reagan. "Maybe if there's a feeling that you can be of service, you feel you have to do it."

Wallace asked the couple about their first encounter – when actress Nancy's name had mistakenly appeared on the mailing list of a Communist newspaper.

"I was doing a picture for Mervin Leroy and I complained to him about it," said Nancy. "And he said, 'I know Ronald Reagan. And he's the president of the Screen Actor's Guild and he'll be able to straighten out your problem.'"

"At that point, I just wanted to meet Ronald Reagan," she added. They ended up going out on a blind date.

And the rest is history. But before becoming a political couple, the Reagans were a Hollywood couple. They appeared in only one movie together -"Hellcats of the Navy."

"For all the years we've been married, it's been we, not you and I," said Ronald Reagan. "It would be inconceivable for me to go my own way on something without her. And I think it would be the same with her."

Wallace reminded Mrs. Reagan how she had once described herself in the 1975 interview: "My job is being Mrs. Ronald Reagan." Does she ever see herself as a separate person? "No, I never do. Always as Nancy Reagan. My life began with Ronnie."

In a recent interview, Wallace asked her about being chided during her husband's presidency because of her frequent consultations with an astrologer.

"At that time, that was right after Ronnie had been shot. And I was talking to anybody and everybody who would give me some advice, some consolation," says Mrs. Reagan. "I worried terribly every time he went through the door."

"I don't think my heart started again until he came back. Because after you've been shot and you've lived through it, then your threats increase. And they say, 'Well, if he didn't get him, I will.' So I talked to a lot of people."

Something else, however, has also dogged Mrs. Reagan over the years - reports that she was the driving force behind her husband's political ambitions.

"You were always political partners. Weren't you," asked Wallace. "He depended upon you."

"Well, that could be. But I wasn't a politician," says Nancy.

Her son Ron, however, disagrees: "I don't think [Ron Sr.] would've gotten to where he got to [without her]. Because I think she has more ambition than he does. I think if left to his own devices, he might've ended up hosting 'Unsolved Mysteries' on TV or something ... I think that she saw in him the stuff that could be president, and she kept pushing."

"No. That's just not true," says Nancy about her son's remarks.

Differences of opinion have plagued the Reagans and their children down the years - and sometimes their difficulties were played out in public.
But now, the Cold War within the Reagan family has ended. Was it the president's illness that sparked the reconciliation?

"I suppose it helped. But then, as you grow older, you know, on their part, as they grew older," says Nancy. "It was a hard time. But things change. And you begin to remember just the good times and not the bad times."

Today, Patti, the Reagan's daughter, is often at her mother's side. She has written about her father's battle with Alzheimer's disease, and its effects on her mother: "My mother's eyes are frequently such deep wells that I have to look away."

"I think she means that when she looks at me, she sees a deep sadness," Nancy says.

Patti also writes about the eyes of Alzheimer's patients: "In the early stages of Alzheimer's, the eyes have a weariness, a veil of fear. I used to see my father's eyes simultaneously plead and hold firm. Slowly, sometimes over months, sometimes over years, the eyes stop pleading … A resignation, an acceptance of distance, strangeness, a life far from home. You know the look when you see it. And the only mercy is that the fear seems to have subsided."

"But Patti feels, and she may be right - that somehow, he does know," says Nancy. "And with Alzheimer's patients you have to be very careful what you say when you're looking at them over their bed. Because once in a while, they understand it. So she thinks that he has gotten a feeling of the two of us together. And, as she says, his soul doesn't have Alzheimer's."

These have been momentous years for the Reagan legacy -- and Mrs. Reagan is doing her part.

In 1996, she addressed the Republican National Convention in San Diego. "That was the first time I'd ever gone to a convention without Ronnie. And so, they wanted me to say something. And I walked out there not prepared for the reception at all ... I started to cry, which, of course, is not too hard."

There was also a dedication of the USS Ronald Reagan, the Congressional Gold Medal awarded to both President and Mrs. Reagan, and the Presidential Medal of Freedom to Mrs. Reagan.

Last year also marked a major milestone for the Reagans - a milestone void of celebration. March 4, 2002, was the couple's 50th wedding anniversary.

What did Nancy do that day? "Nothing," she says. "And how I'd love to be able to talk to him about it. And there were times when I had to catch myself, because I'd reach out and start to say, 'Honey, remember when …'"

She's not sure if her husband still knows her. But she says she is comforted by the letters President Reagan wrote to her over the years - letters that bring her husband back to her.

A love letter that he once wrote aboard Air Force One reads: "When you aren't there I'm no place, just lost in time and space. I more than love you, I'm not whole without you."

"I see friends. Not every day, but I do. I stick pretty close to home," says Nancy. "It's lonely, because really, when you come right down to it, you're in it alone. And there's nothing that anybody can do for you. So it's lonely."

In 1975, Nancy said that her life began with her husband, and that she couldn't imagine life without Ronald Reagan. Has she said goodbye yet?

This interview first aired on Sept. 25, 2002.
Thanks for reading CBS NEWS.
Create your free account or log in
for more features.
View CBS News In
CBS News App Open
Chrome Safari Continue
Be the first to know
Get browser notifications for breaking news, live events, and exclusive reporting.