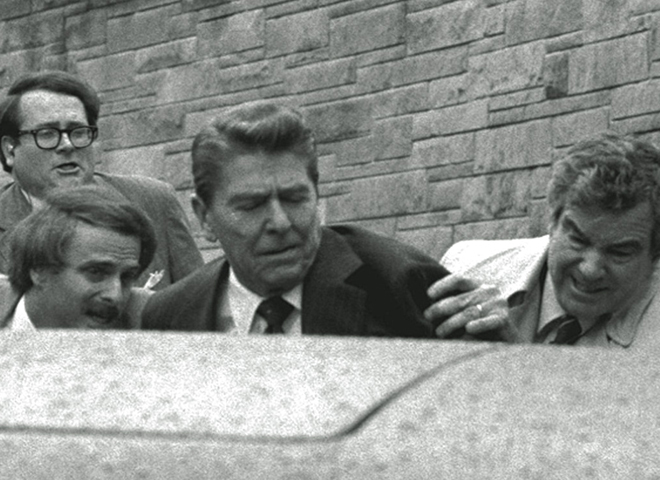 Thirty years ago this week our country had a very close call. And all these years later we're still learning about what really happened in a few bewildering minutes. Our Cover Story is reported by CBS News chief Washington correspondent Bob Schieffer:

It's one of those artifacts of the electronic age: Videotape of an ordinary afternoon that, in a matter of seconds, became etched forever in our memories.

But what many of us have forgotten - or maybe never really knew - is what a close-call it really was.

Retired Secret Service agent Jerry Parr said we nearly lost the president that day. "Absolutely. I mean, there was absolutely no doubt in my mind that it was close."

Parr knows these pictures from the inside - it was he pushing Ronald Reagan into the limousine.

"He said, 'You treated me just like a baseball, thrown into the car,'" Parr laughed. "As we pulled away, I could see the bullet hole in the window, and three bodies on the sidewalk. I knew, then, that it had been gunfire."

In a profound twist of fate, Monday, March 30, 1981 was a day that Jerry Parr wasn't even scheduled to guard Reagan. As the head of the protective detail, Parr hadn't yet become familiar with the new president, and simply wanted to study his habits.

A routine day was on the agenda: A few White House meetings, and a speech at the Washington Hilton ballroom.

But that routine was shattered at 2:27 p.m., when six shots rang out.

"You were operating on more than training; it was instinct, too," said Schieffer.

"Yeah, yeah. Instinct, intuition, a combination of both, maybe," said Parr. "And all the training. And the fact that I wasn't afraid of him to handle his body like that. In other words, I think when you're a young agent, you're reluctant to do anything or just to grab him and do something with him. But I wasn't. And so it just happened to be that day. For me I hoped that it'd never come, because of what happened with Kennedy."

The 1963 assassination of John F. Kennedy was still fresh in the minds of the Secret Service. And in its wake, there had been a string of violence: The shootings of Martin Luther King, Jr ... Robert F. Kennedy ... Governor George Wallace ... and two assassination attempts on President Gerald Ford.

Two decades of gunfire that had taught the Secret Service one lesson above-all: Move fast.

"If Jerry Parr was a split-second slower, he would have gotten it in the head," said Washington Post reporter Del Quentin Wilber. "If you look at the angle that he was going at, would have hit Reagan in the head."

Wilber has written a new book, "Rawhide Down: The Near Assassination of Ronald Reagan" (Henry Holt), that discloses heretofore unknown details of that day.

It takes its title from Reagan's Secret Service code-name: Rawhide.

Wilber petitioned the Secret Service to release audio recordings of radio calls from the president's limo.

"You hear it, they are so calm and, like, just level, like you would imagine Chuck Yeager in a plane would talk to people in the back of the plane: Well, ladies and gentlemen, the engines have both flamed out, but we're gonna land, you know?" Wilber said. "I think that's the training, the discipline that the Secret Service put into those guys.

As the armored vehicle raced across Washington, agent Jerry Parr's mind was racing, too. Could this have been a so-called decapitation strike by the Soviets? Were other gunmen still waiting in-ambush?

Although the shooter, 25-year-old John Hinckley, Jr., was in custody, not until late that evening were authorities certain Hinckley had acted alone.

Back at the Hilton, press secretary Jim Brady was gravely wounded - as were Secret Service Agent Tim McCarthy and police officer Thomas Delahanty.

At that point, no one knew the president had also been shot.

"My job, then, was to see if he'd really been hit," Parr said. "I ran my hands up under his coat, around his belt line. And I started workin' up, up, up, up in the armpit area. Up into the back of his neck, through his hair and everything. And I didn't see any blood at all.

"But about Dupont Circle, he started spitting up this blood - profuse amounts of red, bright red, frothy blood," Parr said. "And I thought, 'Well, what would cause that?' Maybe landing on top of him cracked a rib. Maybe it punctured a lung."

That was when Parr made the single most important decision of the day: Forget the White House. Get to a hospital.

"And I just decided, with his looks and knowing that all the things that could happen if it was a mistake by taking him there - we know the stock market falls the minute a President like that goes to a hospital - I took the chance."

By chance, the closest hospital was on the campus of George Washington University, a hospital that had a dedicated team of trauma doctors and nurses standing-by - something few other hospitals had in those days.

"When I walked down the emergency room after being STAT-paged to go down there, I had no clue why they wanted me," said Dr. Joe Giordano. "And I saw all these strange people around, you know, with their earplugs in and everything like that. And I said, 'What are these people all doing here?' I walked in and there he was on the gurney stark naked. So it was quite a shock."

Five years earlier, when Dr. Giordano had taken over trauma care at George Washignton, its importance was only beginning to be appreciated.

"Surgeons were returning from Vietnam, and the first thing they noticed was that, gee, in the field they had everything they needed for resuscitation of the trauma patient, and the patients did very, very well because there was a trained team working by protocol with everything at their fingertips," said Dr. Giordano.

"They came back to the United States and it was a disaster. Emergency rooms did not have experienced personnel seeing patients."

Giordano believes the decision to bring Reagan straight to his emergency room made all the difference.

"We knew he lost about 40, 50 percent of his blood volume with a minimal blood pressure. He was 70 years old. I think that would've been a very critical issue if he had not gone directly to GW," he said.

Back at the White House, uncertainty was the enemy. Few in the administration were pleased when Secretary of State Al Haig created confusion about who was running the country.

Reagan's top advisers - the so-called troika of James Baker, Michael Deaver and Edwin Meese - knew that a presidency is defined by how it deals with crisis.

Fact is, at that time, Reagan's popularity was at record lows, and concerns about his age and fitness had dogged him throughout the campaign.

But as doctors began treating the president, not only did his vital signs bounce back, so did his sense of humor.

"When we took him to the operating room, he looked up at me and he said, 'I hope you all are Republicans,'" said Dr. Giordano. "And I said, 'Today we're all Republicans, Mr. President.'"

Long-time aide Lyn Nofziger knew this was something the press had to hear. At an afternoon press briefing he answered reporters' questions about the president's condition going into surgery by saying, "He was conscious and he said to the doctors in the OR, 'I hope you're all Republicans.'"

In a way, said Wilber, the event formed a bond with the American public.

"After the shooting, people saw him as a person," he said. "He was a guy who laughed at death, right? He cracked jokes. American people like that. They like a guy who can do that. And it enabled him to separate the person from his policies and politics."

The combination of skillful message control and Reagan's rapid medical recovery was a game-changer for his presidency. Appearing only a month later before a joint session of Congress, it was clear that Ronald Reagan was back on track.

As the following years proved, the day would have a profound effect on Reagan himself and his relationship with the American people.

"He got a lot of benefit down the road," said Wilber. "Iran-Contra, the other controversies, may have sunk another Presidency. But they didn't sink his. And I'm convinced it's because the people of America got a rare glimpse at someone without the facade on. Remember, he had the most scripted Presidency in, like, U.S. history at that point. And this was its most un-scripted day."