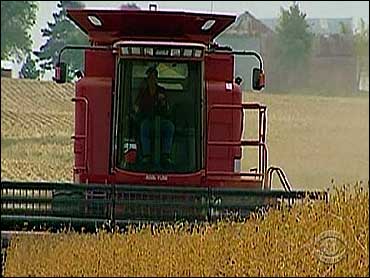 It seemed like a good idea at the time. Use corn and other crops, instead of oil, to make fuel. It's renewable and causes less climate change because a lot of the carbon produced in burning it is reabsorbed as the new crop grows.

Governments and industry loved the idea so much that the European Union decided fully 10 percent of fuel should be made this way in the future, reports CBS News correspondent Mark Phillips.

"[The] overall conclusion was that we really needed to slow down on biofuel production and use because all the new evidence shows there are some potentially harmful effects," said Professor Ed Gallagher, author of the Report on Biofuels.

A new European study shows that producing biofuels is helping drive up already skyrocketing food prices, some of which have effectively doubled in the past few years.

"We shouldn't be taking agricultural land and growing biofuels on it," said Nick Goodhall of the UK Renewable Fuels Agency. "In that sense, of course, if we are displacing food then that means it has got to come from somewhere else. So one can easily see why there might be an effect."

There was always going to be a relationship between what biofuels burn and what they stuff costs. But nobody really anticipated how much of an effect biofuels would have on the production and the price of food. It's caused a serious policy rethink.

Europe will now slow down its switch to biofuels and look for other new technologies instead.

Another problem is that refining some crops, like corn, into fuel can produce more greenhouse gases than simply using gasoline in cars in the first place. As can cutting down rainforests to grow sugar cane, for example. It's what scientists call bad biofuel practice.

"Bad biofuels, as they are known, are exactly that," said Goodhall. "They don't help anything and, in fact, can make problems worse."

Biofuels once seemed like a quick fix, but may have just been a detour on the road to a sustainable energy policy.