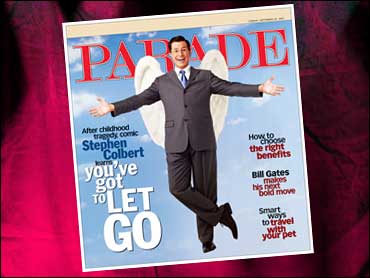 Stephen Colbert is known for the self-centered pundit he plays on his Comedy Central talk show. In real life, he's much more down-to-earth than his alter ego, but he says he wasn't always so humble.

When he was first starting out, he joined Chicago's famous Second City Comedy troupe. But even though it was comedy, Colbert was strictly business when it came to his craft.

"Strangers With Candy" star Amy Sedaris, who was also a member of the troupe at the time, used to say Colbert was the kind of guy who had his tie on too tight.

So, she decided to break him.

"One night we were doing a scene on stage, and we were supposed to [play it] straight to set up the jokes that were coming, and I had to be sort of approaching her romantically," he tells Parade.com. "The lights come up and her back is to me. She turns around and smiles, and she's got plastic teeth in - like giant, snaggletooth, picket-fence teeth in. And I burst out laughing and got so angry at the same time. I laughed and got so mad that I almost left [the] stage."

Colbert finished the scene, but he was so furious with Sedaris that he locked himself in the bathroom so he wouldn't start yelling at her backstage. But after he calmed down, he realized something had changed.

"Something burst that night, and I let go of the pretension of not wanting to be a fool," he said. "After that, I've just enjoyed being a fool; I mean, you've still got to be professional and get the job done. But certainly, it was medicine for me to get off my high horse."

The full interview with Stephen Colbert will be featured in Parade magazine on Sept. 23.
By Judy Faber