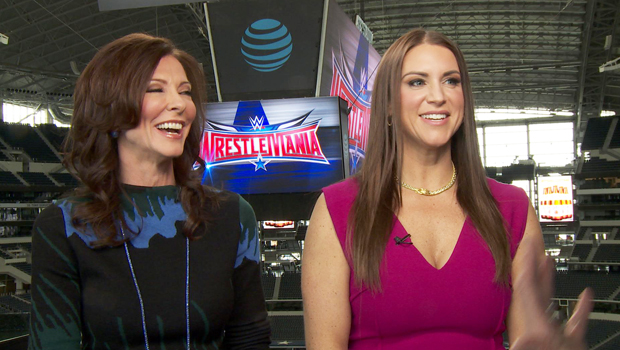 This year's bout of over-the-top staged wrestling that is Wrestlemania is just one week off. And, as Rita Braver now explains, there's a most unusual TAG TEAM in command:

Over more than three decades, Wrestlemania has become the Super Bowl of American wrestling -- a day-long event featuring brawny brawlers of both sexes. And next Sunday, for the first time, the success of wrestling's biggest event will rest largely on the very strong shoulders of two women.

They are scions of two of America's most prominent sports families: Stephanie McMahon, daughter of World Wrestling Entertainment CEO Vince McMahon, is the company's Chief Brand Officer; and Charlotte Jones Anderson, daughter of Dallas Cowboys owner Jerry Jones, who holds the same job for the Cowboys. It was Charlotte who managed to land Wrestlemania for her family's AT&T Field.

"I made the pitch of why we needed to be together, and why Wrestlemania had to occur here," Charlotte said. "And when it was over, Vince looked down the table and he said, 'We're gonna come to AT&T Stadium.'"

"How could we say no to Charlotte," Stephanie laughed.

Of course, it's a bit different from the games usually played here. Charlotte's Dallas Cowboys are in a sport where nothing is pre-ordained. But Stephanie makes no bones about the fact that World Wrestling matches are essentially fixed (or as WWE prefers to say, "scripted"). This season's stories of villains versus heroes will culminate in Wrestlemania, really a mega-finale, where champions will be revealed.

And does Stephanie know what the outcome is? "Absolutely," she said. "And if we're doing our jobs right, we're going to take you on a ride to make you so anxious and so caught up that you can't wait to see what's going to happen."

But if their sports are different, their lives have many similarities.

Stephanie faced skepticism as she came into the business: "Oh, there still is, absolutely there still is," she told Braver. "I do think that when you are the boss' daughter or the boss' son, that you have more to prove."

And her father obliges: "He challenges me more, he drives me harder," she said. "You don't expect respect; you have to earn it from everyone."

Charlotte said her biggest challenge was "overcoming a perception that is, 'You are there only because you are your father's daughter.' So every step of the way, you're always trying not only to prove to yourself, but you're trying to prove in your work that you belong where you are."

And both women are working in fields dominated by male executives. Charlotte was not long out of Stanford University when her father sold his oil and gas business to buy the then-struggling Cowboys.

"People forget that at that time, the Dallas Cowboys were losing $75,000 a day," she said.

One of her jobs was to save money. "You pick the biggest red-letter item on the list, which happened to be laundry, and went to the local dry cleaning and said, 'I'll tell you what, if you will take care of our laundry bill, I'll put your sign out at practices.' And slowly, the idea of sponsorship and marketing evolved."

In recent years, Charlotte oversaw the building of the $1.15 billion stadium, the nation's largest domed structure. She is now supervising a new, state-of-the art practice field and team headquarters on 91 acres about an hour out of Dallas, in Frisco, Texas.

Stephanie McMahon started working at World Wrestling, headquartered in Stamford, Connecticut, when she was still in high school.

"I'd come after school and I'd answer phones," she said. "I still have extensions memorized from that time."

After Boston University, she worked her way up through the executive ranks, but she also plays another role. She is not only a top executive, but also a wrestler -- a villain, nicknamed the Billion Dollar Princess.

She once even had to slap her mother, Linda McMahon, a former WWE executive in her own right (and one-time candidate for the U.S. Senate).

"And I almost threw up," Stephanie said. "I'm not kidding! That was the single hardest thing I have ever had to do in our show."

Of course, it was all part of the show. Outside the ring, Stephanie's life is remarkably parallel to Charlotte's. Both are moms to three children; both are married to men who work for the family business (Charlotte to marketing executive Shy Anderson, whom she met on a blind date, and Stephanie to WWE World Heavyweight Champ, Triple H). And both joke about conflict with their dads.

"He might not remember that he threatened to fire me," Stephanie laughed.

"I've probably threatened to fire everyone who's ever worked here," Vincent McMahon replied. "It's sort of a motivational technique."

But each is clearly the apple of their father's eye. Jerry Jones says he admires his daughter's ability to command respect: "I knew from her experience that she wouldn't break, that she had a tough skin," he said. "I saw that in her, that she would confront."

Vince McMahon calls Stephanie a "jolt of adrenaline, because I draw all that youth and that vibrance she has."

Neither woman wanted to discuss speculation that they could each be in line to run their family company in the future. They were both too focused on Wrestlemania 32.

Stephanie says her goal is to fill every seat. They hope to break the Wrestlemania attendance record of 93,173 set in 1987. But it's more than numbers that drives them:

"We want people to walk away and say, 'I have never been in a place like that and had an experience like that in all of my life,'" said Charlotte.

​Cowboy cook Kent Rollins at home on the range