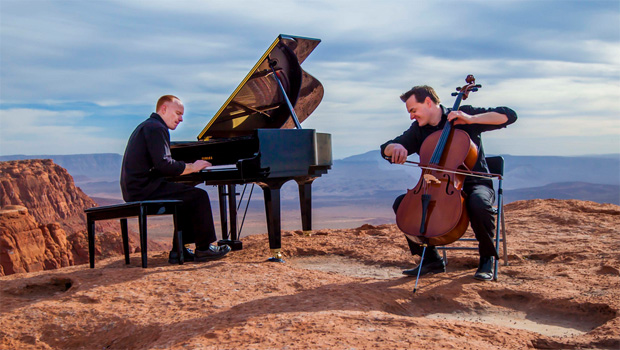 The members of a one-of-a-kind music group are striking a chord with devoted audiences. Lee Cowan shows us how they do it:

There's no easy way to describe what The Piano Guys do. There's no point in trying to label it, either. No genre really quite fits.

"I like to say it's familiar and unfamiliar at the same time," said Steven Sharp Nelson.

Jon Schmidt perhaps puts it best: "We just know when it feels right, you know?"

If you haven't heard of The Piano Guys, you haven't been on YouTube lately. Their music videos are more like travelogues. They've been viewed well over a half-billion times.

And yet, as Internet sensations go, The Piano Guys consider themselves a little less than hip.

"We're not rock stars," said Nelson. "We're the farthest thing from it. Nobody is putting pictures of Jon Schmidt and Steven Sharp Nelson on their wall, in their lockers, right, and enshrining us. Nobody is doing that because we're old, we're dads, we're not good looking, I mean, come on, let's be honest!"

Besides Nelson on the cello and Schmidt on piano, The Piano Guys consists of two others -- their producer, Al van der Beek, and cinematographer Paul Anderson, the man behind those extraordinary YouTube videos.

"You have to do something different that people haven't seen before in order for them to want to share it," Anderson said.

And for them, being "different" is all about piano placement, like hoisting one on top of a thousand-foot cliff in Utah.

"We basically just wrapped it in these cables and shrink-wrapped it," said van der Beek.

Anderson admitted they had no idea what they were doing.

"Yeah, you can't go to Home Depot and ask for helicopter-to-piano tether cables, right?" said van der Beek. "But it made it!"

They managed a mini-concert at Iguazu Falls in Brazil, and moved a piano by hand along the Great Wall of China.

"Basically they built some kind of contraption where they could rest sticks on their shoulders," said van der Beek. "They went up probably around 200 stairs up the Great Wall of China. Crazy!"

Those kinds of stunts have earned them a pretty hefty Internet following, The Piano Guys now have nearly 4.3 million YouTube subscribers, with about 5,000 new ones every day.

"Isn't that crazy?" said van der Beek. "I don't want to sound nonchalant about it, but I mean, it's like selling a concert hall every single day."

Yes, they do play live, too, as they did recently at the Smith Center for the Performing Arts in Las Vegas.

They've released several albums as well, the most recent a live album out this month.

Their fans are as hard to categorize as their music. They're young and old, male and female, rockers and not so much.

"We remind each other all the time, you know, guys, don't let this get to your head," said van der Beek. "This can all be taken away as fast as it came. I don't ever want to get used to this feeling of the miracle that brought us together."

Not a day passes when they don't give thanks for it all; faith and family matter most. They're all devout Mormons. They record not in L.A., New York or Nashville, but in the basement of a modest home in Salt Lake City.

"Church of Jesus Christ of Latter-Day Saints -- you feel like a lot of people misunderstand you, and that causes a lot of frustration," said Schmidt.

"Look, we're Mormons -- we don't have horns on our heads!" said Nelson. "We don't have multiple wives, we're not crazy. Well, some of us aren't crazy!"

They have a sense of humor about it all. They joke they don't collect wives, they collect children. They have 16 among the four of them.

"I smile a lot in my videos," said Nelson, "and people ask me why I do, and it's because of them. It's my wife and my kids, I'm thinking about them, and how much I love them and how much they do for me. And so no matter where I go, and how amazing the world is out there, it's never as amazing as inside the home."

That's why when Sony Music came calling with a big recording contract, these four dads were at first more worried than excited.

"We said 'no' six or seven times," said Nelson.

They wanted to make it, but not at the expense of their personal lives. Sony compromised, agreeing to distribute their music worldwide and letting them work their tours around their faith's and family's schedules.

"There is an understanding that family will always come first," said Nelson. "We're dads first and foremost, and that's been a very important thing for us, and it's kept us alive, it's kept us inspired, and kept us doing what we're doing."

Schmidt added that it makes their music better: "It makes your performance better. You just feel like everything's in balance. It's good."

Cowan was amazed at what they can accomplish in that small basement studio.

"We're just basically just trying to get all the different kind of sounds, different kinds of textures, and then we'll just kind of piece it all together," said van der Beek.

Nelson has some 20 cellos, and he can make each one sound like just about anything.

Cowan watched as he laid down a buzzing sound, then something that sounded like a seagull. Then a bang.

Mix in a few steel brushes and a little hand rubbing ("Yeah, that's cool"), and topping it all off: Schmidt's signature touch on the piano.

They are painfully aware the Internet is fickle, which is why they say they trust not just in their talents but in something larger.

Cowan asked, "How far do you think this can go?"

"I think it can go for a long time," said Anderson.

For now, The Piano Guys are on a roll, creating that wonderful sound amidst Nature's wonders.