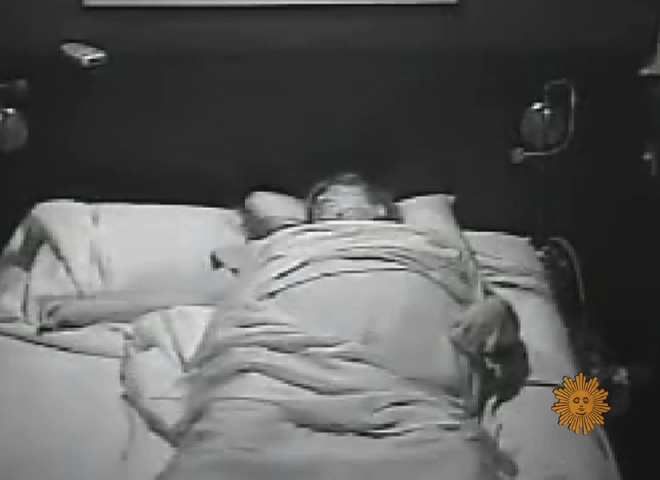 We advanced our clocks an hour for Daylight Saving Time . . . which for most of us means an hour of lost sleep. An hour of lost sleep you can add to the countless others we accumulate . . . hours of lost sleep that can take a toll. Which is why we'll be hearing some learned pillow talk this morning from Barry Petersen:

In the original story, Sleeping Beauty was out of it for a hundred years. Rip Van Winkle dozed for a mere twenty. While in "Groundhog Day," sleep meant waking up to the same day, lived over . . . and over.

We might envy Hollywood having so much fun with sleep - because most of us DON'T.

Sleep experts tell us adults need seven to nine hours a day. But one-third of all Americans are getting LESS than that.

And scientists see a dangerous downside. Unless you happen to be among the lucky few who seem perfectly cast for our frantic email/cell phone/iPad/instant messaging sleep-deprived world.

Researcher Ying-Hui Fu was altering the genes of lab rats to study their sleep habits. When she reached out to ordinary people to see how they compared, she discovered a whole new class of what she calls short sleepers.

Georges Halpern, who sleeps only four hours a night, is one of them. He often goes to bed at midnight or later, and wakes up early, to work with fellow scientists in Asia and Europe.

"This is a wonderful opportunity to go to my office and to start working with the people who are awake in their office, in their labs, when it's 5:00 in the morning right here," Halpern said.

And they have very distinct personalities: "They're very energetic, they are very optimistic," said Fu. "They are resistant to failure. So many of them are very successful."

Again, short sleepers are rare, perhaps one percent of us or less. And that doesn't include people who sleep fewer hours during the week and then sleep in on weekends to "catch up."

And sleep deprivation, says new research, is the root of a lot of bad news for our bodies.

It's associated with cardiovascular disease, diabetes and mood problems, said Dr. Nate Watson, co-director of the University of Washington Sleep Center in Seattle.

He says the metabolism of sleep deprivation makes it every dieter's nightmare: "When you sleep less, genetic factors that are associated with obesity seem to be turned on. For instance, there's a hormone called Leptin, which is released from fat cells. That tells your body that you're full when you've eaten. That hormone level goes down when you're sleep-deprived.

Kent and Kevin Wilson are identical twins in Watson's study. Using twins means the genetics are the same, so weight change comes from other factors, like lack of sleep.

Both get only five-and-a-half hours of sleep a night - and tip the scales in the high 300s.

Their lives are crammed, with their involvement in church, taking kids to drill practice, and making time for wives and family.

So, like many of us, they make sleep a low priority.

"Can't do it right now, because of the busy schedule, with family, work, school and church," said Kent.

But early in their lives, they toured with rap artist MC Hammer. To weather the travel, and be rested for each night's performance, they skipped the party-hardy life and set a pretty dull routine.

"When you get on the bus, in the hotels, we slept probably literally ten, 12 hours a day," said Kent. "Until it was show time, you know. We wanted to make sure we gave the audience our best. So actually I slept more, you know, as an entertainer."

When he hit 250 pounds, Larry McLean also turned to Dr. Watson for help, in making an environment that was more conducive to sleep. Dr. Watson got Larry sleeping eight hours a night.

Now Larry, who works in technology, is 50 pounds lighter - and still losing.

"So my bedroom is a place where I go to sleep," McLean said. "At night, light some candles, get the bedroom kind of a peaceful place. But I've also eliminated any electronics - no televisions, no stereo, nothing. It's gone."

Truth is, sound sleep requires no artificial ingredients. And when you mess with a restful night, you're messing with success.

Just ask the sleep doctor and his beloved Seattle Seahawks. When they travel East, that three-hour time difference disrupts their internal time-clocks.

"When the kickoff happens, in Giants Stadium, it's going to feel like 10:00 a.m. to the Seahawk players, so they're not going to be prepared, mentally, physically," said Dr. Watson. "They're just going to feel off their game a little bit. And as a result they might start slow, not perform up to their standards, and that's going to put them at a disadvantage."

And what a disadvantage! Nine straight away losses to East Coast teams since December 2007, until their first win this past season.

Players who got by on less than seven hours a night were told to sleep for 10.

Results: A nine-percent increase in both free throw accuracy and making three-point baskets.

Cheri Mah, a researcher at the Stanford Sleep Disorders Clinic, ran the study. She said there's very little research in the specific relationship between sleep and athletic performance, "or how your body clock impacts performance in athletes."

And not just athletes. Your average high school teenager needs about nine hours of sleep. But most schools open early.

"We started at 7:40 in the morning," said Principal Mathew Zito of California's Menlo-Atherton High School. "We realized that students often fall asleep during zero and first class. The typical high school schedule really goes against their biological clock."

So Zito decided it was time to let his students sleep in. "By starting at 8:40 or 9:30, a lot our students are getting an extra 90 minutes, even two hours of sleep," he said.

That means kids are more awake, and better able to gets As instead of Bs or Cs.

But what about the most important question: How much sleep do YOU need?

Dr. Watson has a way each of us can figure it out: "Next time you're on vacation, sleep as much as you can. Go to bed when you're tired, wake up spontaneously, when you're rested. And then at the end of that vacation measure how long that time is. And that's how much time you need to sleep.