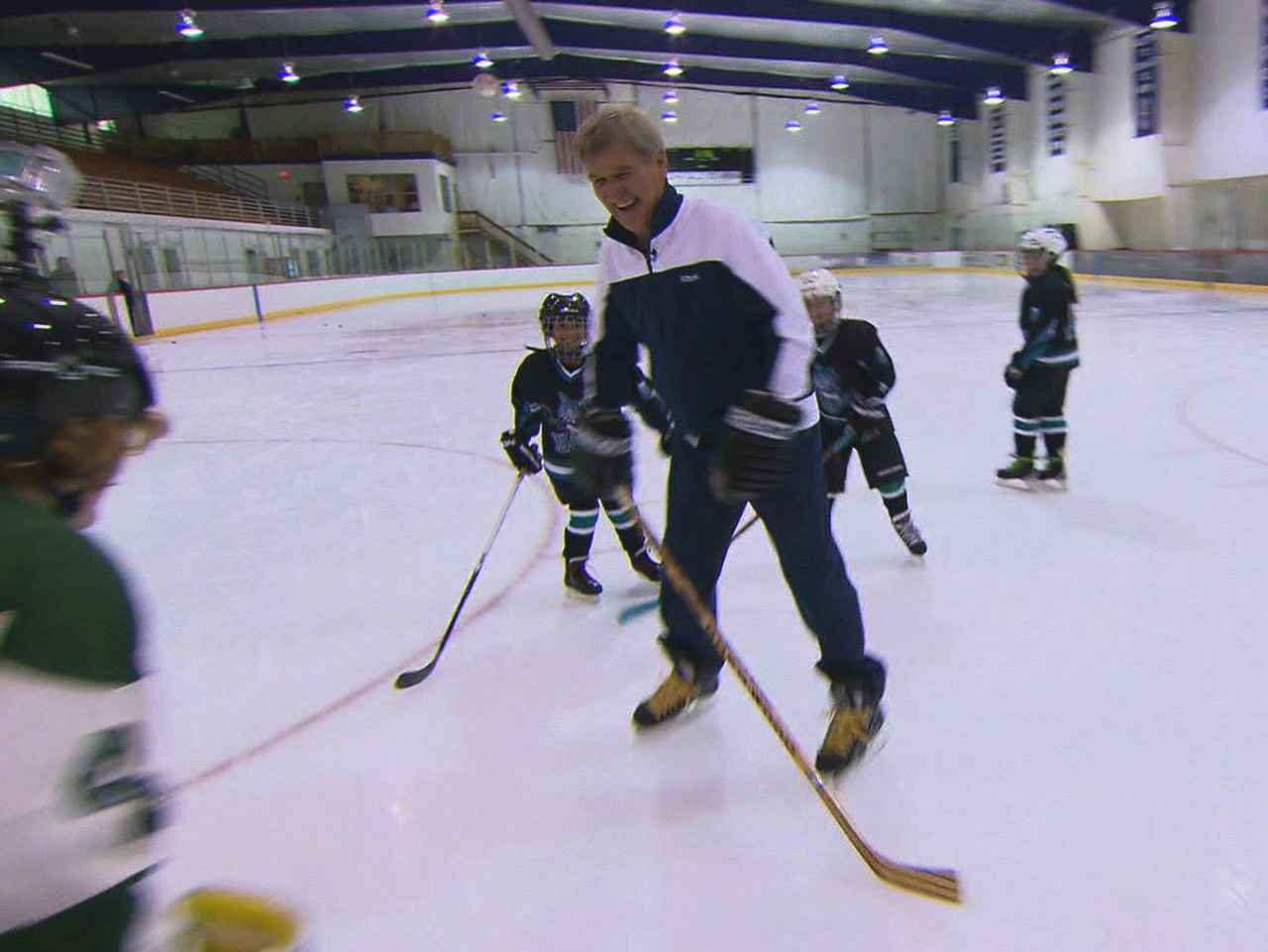 (CBS News) Although Bobby Orr enjoyed a relatively short career in big-league hockey, he still looms large in the history of the game. Our Mo Rocca skated up to him for some Questions and Answers:

It's one of the great moments in sports history: Bobby Orr, celebrating the overtime goal that, in 1970, brought the Stanley Cup to Boston for the first time in 29 years.

One photo caught his body flying through the air like Superman with skates.

But it's his face that says it all: pure joy.

"Growing up in Canada," Orr said, "most kids from Canada dream of playing in the NHL, and they also hope one day to be on a Stanley Cup team. That was a big goal.

Number 4, Bobby Orr, is 65 now and long retired. And the famously shy superstar has decided the time has come to tell his story.

In Orr's new book, "the word that comes up over and over when you talk about hockey and your life in general is passion," said Rocca.

"Yep," he replied. "The love and passion I had for the game was my key. I never had that taken out of me by my parents or a silly coach."

He fell in love with the game when he was boy, playing pond hockey in Parry Sound, Ontario, in his native Canada.

"Playing with my buddies, whether it's on the bay or the river or the school rink, parking lot, playing hockey, those are my fondest memories," he said. "We'd have our skates and our stick, and away we'd go, and your parents would say, 'Be home by dark.' "

His parents kept him grounded

"People would come up to my father and say, 'Your kid's gonna be a pro.' Dad's fine. He'd come to me and the advice he gave me was, 'Go and have fun. We'll see what happens.' "

It was a simpler time in professional sports. When Orr was 14, he was signed to play on the Boston Bruins farm team. His signing bonus? A whopping $1,000, plus . . .

"They stuccoed my mother's house, you know the stones?" Orr said. "My father could get a car, and that was in '62, and the car couldn't be any newer than a '56. So we had a '56 Chevrolet back then! And I also got a suit. I forgot about the suit. So I was really happy about the suit."

At 18 Bobby Orr brought his fearless and freewheeling style to the NHL. Nobody in Boston (or anywhere else) had ever seen anything like it -- a defenseman who was a formidable offensive threat.

He seemed unstoppable, capable of rushing the length of the ice with the puck on his stick, while his opponents were reduced to bystanders.

"You wouldn't give up the puck -- now did anyone ever accuse you of being a puck hog?" Rocca asked.

In the fastest game on ice, there was no one more agile, more graceful, no one . . . well, faster than Bobby Orr. And probably no one more modest.

"How cool was it that the Boston Globe columnist Ray Fitzgerald called you 'Nureyev on ice'?" Rocca asked.

Among his many achievements, he was a defenseman who twice led the league in scoring. There were few records Orr didn't break.

"Oh, I've seen some guys do some funny things after scoring. I didn't," he replied.

To say that Orr describes his own achievements with understatement is an understatement. About that famous Stanley Cup winning goal, for example, he writes in his book that on May 10, 1970, "I scored a goal there."

"It was an exciting goal," Orr laughed.

It took some convincing to get him to revisit that moment, now cast in bronze in Boston.

But Bobby Orr would only play eight full seasons in the NHL. Bad knees forced him to hang up his skates in 1978. He was just 30 years old.

At a press conference, he tearfully said, "I'm no longer able to play."

It was, he told Rocca, "a very difficult time for me. You know, I played hockey from the time I was knee-high to a grasshopper. And all of the sudden, that's it. You know, I never looked at hockey as a job. Now I have to go to work. Work!"

And to make matters worse, in spite of signing the first million-dollar hockey contract, he was nearly broke. His agent, Alan Eagleson -- a man Orr said he trusted like a brother -- had embezzled most of his fortune.

Eagleson, brought to court by other former clients, later went to jail for his crimes.

"I just wanted to get away from the man -- person," Orr said. "I didn't have the money to hire a lawyer to sue him."

"I just need to interrupt you for a second: You said, 'I just wanted to get away from the man,' and then you corrected yourself and said, 'person.' "

These days, Bobby Orr runs a successful hockey management company. What he really doesn't like talking about:

"Despite your best efforts, more and more people are finding out about the innumerable acts of quiet charity that you've performed from really the beginning of your career," said Rocca. "You do not like talking about them."

"You know, people follow sports, and when I could make someone smile or speak to someone or visit someone or do something, that's something that I -- it's my responsibility. I should do that," Orr said.

"Saved by the bell!" responded Rocca.

Thankfully, Orr is a charitable man. And Rocca needed all the compassion he could offer when he and the NHL great got on the ice together.

Orr teased Rocca about being a "puck hog," then praised him.

Out there on the ice, nobody's happier than Bobby Orr, showing kids how to have fun -- which for him, has always been what hockey is all about.

"I was the happiest guy in the world when I was on the ice," he said. "You're being paid to play a game! That's pretty special."