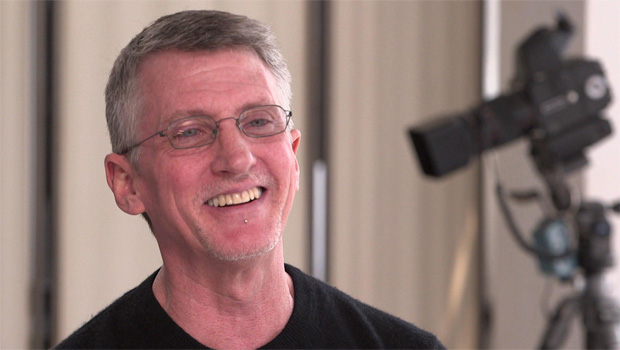 WHAT'S IN A NAME? Serena Altschul, now, with a tale of two brothers...

When you hear the name Mapplethorpe, it's this man who comes to mind: Robert Mapplethorpe, a photographer whose pictures of flowers stirred the soul, and whose pornographic images stirred controversy.

And he snapped pictures of Altschul's daughter, Vivian, hamming it up for the camera, Edward remarked, "I have no interest in really being a baby photographer."

But Edward does take baby pictures. He's taken hundreds of them, but they're just one part of an extensive range of work that has had very little exposure. And that has much to do with sibling rivalry.

"We grew up in a very suburban, middle class neighborhood, in Floral Park, Queens," Edward said. "We had a great childhood."

In the 1980s, Robert Mapplethorpe became a prominent figure in a New York City sub-culture of artists and performers. A recently-released HBO documentary, called "Mapplethorpe: Look at the Pictures," tells the story of his life through the eyes of those who knew him best, including Edward, who grew up idolizing his mysterious and exciting older brother.

"I can really say that I was probably his earliest fan," Edward said. "Because he would come home, I would almost get nervous, a nervous feeling in my stomach, wanting to sort of impress him, and talk to him."

"Even at that age you knew there was something special?"

It was that spark that sent budding photographer Edward to New York City after graduating college in 1981. With a little push from their mother, Robert gave his brother a job. Edward worked for Robert for two years, but never stopped taking his own pictures.

And that's when things started to go wrong.

"He never took an interest in what I was doing," Edward said.

When their names appeared together on a program for a photography exhibit, Robert drew the line -- telling Edward the world had room for only ONE Mapplethorpe.

Edward recalled, "I think that was one of the worst days of my life, when we had lunch and he was very angry. And he made it quite clear that he wasn't going to be any sort of path to any sort of successful career for me, and strongly suggested that I consider changing my name. I thought he had a point. I always wanted to do it on my own. So I was like, 'Okay, why not?'"

And that's how Edward Mapplethorpe disappeared from the art scene. Taking his mother's maiden name, he became known professionally as Edward Maxey for the next 20 years.

It was the beginning of a downward spiral. "I was living out on the West Coast in California and that's when the drugs started taking hold," he said. "And then shortly after that, I heard that Robert was HIV positive."

Despite his own hardship and the hard feelings, Edward returned to New York to care for Robert as he died.

And that's when he hit rock bottom. "I went to my doctor's in tears and told him that I had no control over my drug use, and my life would either end, or end up in jail."

Robert died of AIDS in 1989. That same year, Edward kicked his drug habit. Later he would take back what was rightfully his: the name Mapplethorpe. "There are a number of pivotal points in one's life, and I can point them out, when you realize that you have the strength of character to do what you need to do to make your life better," he said.

Life DID get better. In 1997 he met (and later married) art curator Michelle Yun. And at age 54 Edward became a father. With a new outlook on life, he returned to the darkroom.

"The work that I showed was purely abstract. In fact, it really didn't involve a camera at all. It was all created in the darkroom."

Using only chemicals, light and paint, he began to find his creative foothold.

"It is the ability to go beyond what he thinks is expected of him in photography and what's expected from photography in general," said Foley. "And to go beyond that for him, I think, is what sets him apart photographically not only from Robert, but from other traditional/historic photographers."

All the while, Edward never stopped taking baby pictures. Charging thousands of dollars per portrait, it's the kind of work that pays the bills.

"As the years went on, I just became so enamored by it," he said. "It's become one of the most rewarding things that I do in my career right now."

And that's why these giggling, drooling, tear-streaked, non-nonsense, dubious little faces are the subject of Edward's first book, called "One: Sons & Daughters."

With a recent book tour and a larger-than-life display in the windows of posh New York City department store Bergdorf Goodman, Edward is experiencing his most public success to date.

"It has shifted," Edward said. "I certainly don't have the name and recognition that my brother does, and even the legacy. But not everyone has to be a star.

"As long as you can continue to do the work and do good work, and live your life as a creative individual -- for me, anyway -- that's okay."

The pop art of Corita Kent