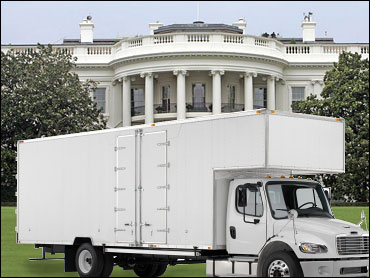 While Americans are watching President-elect Donald Trump get sworn in at the Capitol, the White House staff will be engrossed in a lightning-fast moving operation.

President Obama will begin Inauguration Day with his last visit to the Oval Office, the West Wing and the White House grounds. He and first lady Michelle Obama will also host coffee for Mr. Trump and his wife, incoming first lady Melania Trump. Mr. Trump and Mr. Obama will then travel to the Capitol together in the same limo.

But once they’ve left for the Inauguration at about 11 a.m., moving trucks will arrive at the other side of the White House. And all the major moves will be done before the new first family returns from the Capitol just a few hours later.

“As soon as they leave after their coffee…the clock starts running for the operation to be complete within six hours,” Bradley Blakeman, a former deputy for President George W. Bush, tells CBS News. “So that when the Trumps come back to the White House its as if they were there for four years. The toothbrush is where the toothbrush should be, the clothes are in the closet, and they are completely moved in.”

Simultaneously moving out the old president and his family while moving in the new president with his family is a massive undertaking. And it all gets going just 12 hours before the Inauguration.

“People moving out, people moving in, carpeting, painting, refreshing, cleaning -- it’s really organized chaos or a military ballet,” Blakeman says. “Literally hundreds of people who are given assignments and it’s timed down to the minute.”

Keep in mind that it’s not only the Obamas who will be moving out – so will everyone with an office in the West Wing, where much of the official business of the White House is carried out, and the Eisenhower Executive Office Building, where new staffers and appointees will also set up shop.

New White House staffers are only allowed into their offices once the new president has been installed. That means some won’t be allowed in right away as the finishing touches are put on their offices, prompting some new staffers to spend the day enjoying the festivities before entering their offices late Friday night.

Once the movers have transported all the furniture, its up to the White House ushers to get everything in place within the building. They make sure every staffer has a precise job, with no overlap, so the new first family has absolutely everything they need the second they return to the building.

“It’s amazing that, when you can’t move the clock, how much can get done,” Blakeman says.

Numerous agencies are involved in the transition, and must work together closely. These include the General Services Administration, the agency responsible for making sure government agencies can function, and the National Park Service, which administers the 18 acres of White House land.

The new president’s staff is given blueprints and floor plans of the White House, and works closely with the outgoing staff to make sure it all goes off without a hitch. Many White House staffers spend the week before the Inauguration out their personal effects, so when the moment comes to vacate the premises all they have to do is walk out the door.

The Obamas themselves also appear to have gotten an early start with moving. On Monday afternoon, a moving van was spotted outside their new residence – a sprawling city mansion in Washington, D.C.’s ritzy Kalorama neighborhood.

“It’s a nice home,” Mr. Obama told CBS News’ Steve Kroft on “60 Minutes.”  He added that “it’s temporary” -- it’ll suffice for the last two years it’ll take for the Obamas’ younger daughter Sasha to finish high school here. “But it feels like a home. You know, it’s not crazy big but there’s enough room for, you know, a treadmill and some workout equipment in the basement.”

The first family’s decision to stay in Washington will likely make the process easier, Blakeman says.

“They typically want to move as many things ahead of January 20th as possible because remember, this president is doing something that most presidents have not done and that is they’re staying in town,” he says. “It’s not as if they’re moving three thousand miles away. They probably wanted to move some of their things early so when they get home everything’s in its place and they’re comfortable.”

That means the only things the Obamas will have to squeeze out the door are likely to be “the things that are most personal to them and that they need for those last few hours.”

For their part, Mr. Obama says his family is ready to leave the White House.

“I mean, the girls, obviously, you know, they are now of an age in which the constraints of Secret Service and bubbles and all that stuff has gotten pretty old,” he told “60 Minutes.” “Michelle never fully took to the scrutiny. I mean, she’s thrived as a first lady, but it’s not her preference.”