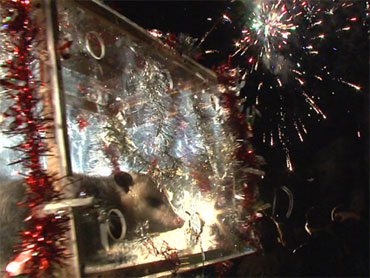 How do we ring in the New Year? Let our Bill Geist count the ways:

On New Year's Eve all eyes were on the crystal ball dropping in New York's Times Square.

What? Nobody was dropping anything anywhere else? Get serious.

A giant pickle plunged into a barrel in North Carolina!

A 200-pound bologna fell to earth in Pennsylvania.

In Times Square they drop the ball. And in Key West, Fla., they drop a shoe carrying a live drag queen.

A frozen carp named Lucky descended to the throne in Wisconsin.

At Clay's Corner gas station in Brasstown - sort of the Times Square of North Carolina - they were doing a traditional dropping of the opossum.

Clay Logan, founder of the opossum drop, would like you to know that their opossum is lowered, not dropped, as delicately as New York's Waterford crystal ball.

"If we said 'Come to the lowering of the opossum,' well, nobody would enjoy that," Logan said.

He denied it was dangerous: "As a matter of fact, there are probably opossums up around my house with little signs saying, 'Use me next year!'"

Clay says the town is proud to call itself the opossum capital of the world, and pays tribute to the critters each year at a pre-drop spectacular that draws thousands - and where Opie, this year's designated opossum dropee, was the star.

Opie could look down through his plexiglass cage and see the remarkably eclectic extravaganza below.

There was the Brasstown Brigade, an outfit that blesses people at the New Year by chanting, "We wish you a happy new year! Great health! Long life!" and firing black powder muskets and playing tuba solos.

And there was a truly moving tribute to fallen soldiers.

. . . which only in Brasstown could be followed by the opossum drop.

It was midnight: Time to "get the opossum down!"

When the crowd had finally gone, Opie was released.

Geist asked Logan if that separation was a stirring, emotional moment.