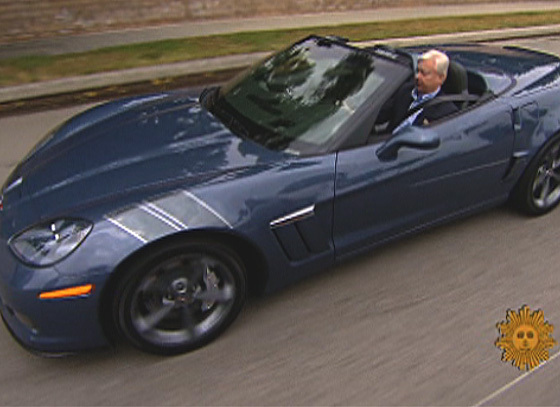 "Men in the middle" are men in a rut ... or so all the talk about the male mid-life crisis would have us believe. What a nice Father's Day gift it would be if that prevailing wisdom turned out to be wrong. Our Cover Story is reported now by Barry Petersen:

It can go zero to sixty in about three seconds, hit 200 miles an hour. A mean machine ... and for some, a time machine.

Most buyers of Corvettes are men in middle age, feeding the notion that they are chasing their youth.

At Rydell Chevrolet in Northridge, Calif., sales manager Rick Piedalue says the guys who buy Corvettes - average age 60 - know exactly what they're getting: They're buying "the fantasy," he said.

A fantasy to ward off a special evil - the male mid-life crisis.

The term was coined in 1965 by Canadian psychoanalyst Elliot Jaques, and it started with fear, says Margie Lachman a psychologist at Brandeis University in Massachusetts.

She was part of the most in-depth study ever done in the United States on the mid-life crisis.

"They were afraid of aging; they felt that their life was over," said Lachman. "They realized they had not accomplished all their goals, and had not been able to realize their dreams. And they thought it was too late, that there was really no more time to do this."

The concept is so widely-accepted, it's often blamed for men behaving badly, from Anthony Weiner, to Arnold Schwarzenegger, to Bill Clinton ... and beyond.

And from "The Seven Year Itch" to "American Beauty" to "Moonstruck," it's one of Hollywood's go-to themes.

But as it turns out, our assumptions are wrong. Surprisingly, Lachman's research shows that for most men it's more fiction than fact. Very few men - perhaps only 10 to 12 percent - have anything approaching a crisis.

"Your numbers would suggest that the vast majority of people take this in stride?" asked Petersen. "85, 90%?"

"I would say they do," Lachman said. "We find a lot of things going on in mid-life that are very positive. I think mid-life is a time where people are in the top of their game, in a sense, in the workforce, in their family. So in some ways I think mid-life should be associated more with competence and confidence than a crisis."

However small the numbers might be, a lot of men THINK it's real, and so is their fear.

And fear is driving a booming business promising to reverse mid-life aging.

"People look at me and they say, 'You look amazing from the neck down.' And I tell them that no one is more amazed than I am," said Dr. Jeffrey Life, who runs a clinic in Las Vegas.

He thinks he has the answer: Testosterone. A patient would get a vial of testosterone, "and then you draw that out into a syringe and inject it into the muscle of your leg once a week,' said Dr. Life.

Most men's testosterone levels peak in their late 20s, and decline steadily - about 1% a year after age 30.

Dr. Life says, stop the decline, and YOU regain your youth.

"I mean, I do things today, at age 72, that I would never have even considered doing ten years ago," he said. "I'm working on my black belt in tae kwon do. I lift weights five mornings a week with Rod, my trainer. I wrote a book. I mean, these are things that I could not have done ten, 15 years ago."

His body is his proof - after 8 years of taking testosterone.

"However we define mid-life - let's just throw out there as 50-ish - how many men at that age do you think need the kind of therapy that you offer?" asked Petersen.

"Which would include the correcting testosterone deficiencies, exercise, nutrition supplementation: 100 percent," said Dr. Life. "Everybody."

And Dr. Life isn't alone. Testosterone HAS gone mainstream, jumping from ads in the back of men's magazines, to slick commercials on network television.

Dr. Thomas Pearls, a gerontologist at the Boston Medical Center and an expert on aging, says the whole notion of a "fountain of youth" goes back hundreds of years. "A few years ago, it was melatonin," he said. "Then it was DHEA. Back in the 1800s, it was ground-up goat testicles."

Dr. Pearls sees not the benefit of testosterone, but a laundry list of side effects:

"In 2010 there was a very high profile New England Journal of Medicine article that came out in which they've already been studying older men in their 60s or so getting testosterone, and they found a very high rate, about four times greater rate, for cardiovascular events," said Dr. Pearls. "Things like arrhythmias, atrial fibrillation, heart attack, angina, congestive heart failure. You hear things like that and it just really - the risks far outweigh the benefit."

His prescription to reverse a mid-life slowdown? Do it the old-fashioned way.

"Go to the gym and just work on the weights," he said. "Look at all the people out there on the weights. I would wager that the vast majority of them are not taking any drugs, and they're feeling great."

I know so many people who don't call it a mid-life crisis; they call it an opportunity. Okay, I've gotten into my 50s. Where have I been? Where do I want to go?

And it allows people to think about retooling.

Re-tooling is the perfect word for what comedian Ray Romano did at age 47, when he found himself suddenly adrift.

"I was 47; 'Raymond' had ended. All the sudden there was nothing, [and I] found myself wondering, What the hell am I doing? Who am I?"

So Romano, along with his friend and producer Mike Royce, decided to explore their own middle ages ... on television.

They call their new show, co-starring Scott Bakula and Andre Braugher, "Men of a Certain Age." And yes, that means middle age.

"Would you go back to your 20s?" asked Petersen.

"It's a lot of acceptance: You can't do this anymore, you can't do this. Woman aren't going to be attracted to you anymore. A big crossing-over, being at peace with who you are and finding your own happiness.

"And it is there," he said. "There is contentment to be had at that age. It just takes adjustment."

The show has helped all of them gain a new perspective on old age.

Bakula is on to something, say researchers, who suggest contentment - not crisis - is the true reality of mid-life for most men.

"Mid-life is a very good time to take stock," she said. "To really take a review of your life. How far you've come, what you've done, what you've accomplished in life. And then think about what you can do in the future.

Just remember to sprinkle in a bit of humor.

"One of the benefits of being older - this is just an odd one - I was playing basketball with my kid the other day, and took a knee in the groin," said Romano. "Didn't hurt as much! There's a little more give down there."

And perhaps most of all, a touch of optimism.

"I think actually men in this age range can be pretty damn happy," said Petersen. "Is that a fair description of you guys?"

"Yeah, but you have to work at it," said Romano. "But I had to work at it in my twenties! You just have to find a way to go. That's how it is in life."