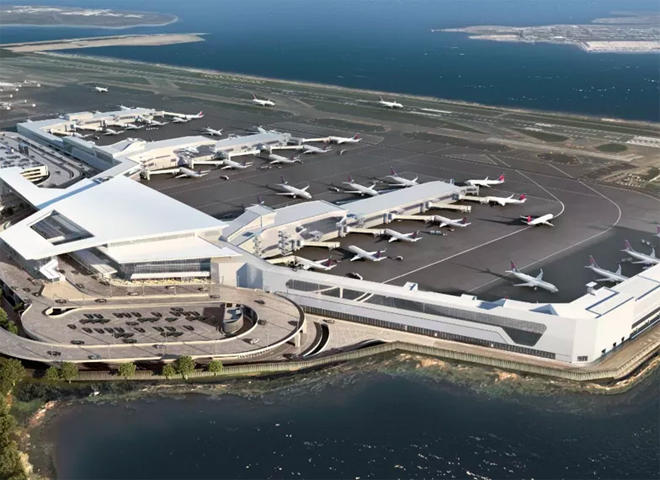 The world's largest indoor waterfall welcomes you to an oasis of amazing shopping, world class dining … and your next flight?

Consistently ranked the best in the world, Singapore's Changi Airport is one of the busiest on the planet. But it has plenty to keep you from complaining about crowds; there are movie theaters, gardens, even a rooftop pool and hot tub with runway views.

"We realized that passengers would like to have a happy start to their journey," said airport executive Tan Lye Teck. While amenities get all the attention, Teck said that what really makes Changi stand out is the passenger experience: "An airport should be more than just, you know, someplace where you go to check in and drop your bag and board a flight."

Sabina and Hannah Douglas-Hill were stretching their legs after a seven-hour flight from Australia, and were standing in the airport's two-story butterfly garden. "It's amazing!" Sabina laughed.

Hannah said, "Maybe we should have stopped longer and hung out in the pool for a bit. There's a lot of things in the Singapore airport that we don't know about, 'cause it's a pretty big airport. So, pretty impressive."

"It's funny you said, 'I wish we could've stayed longer' – almost nobody wishes for a longer layover,' said correspondent Kris Van Cleave.

Except maybe here. A New York Times reporter recently wrote about her trip, not to Singapore, but to Singapore's airport.

Van Cleave had to go almost 10,000 miles to Singapore to visit what is often considered the world's best airport. But when you're talking about the best airport in the U.S. or North America, you go … to Indiana.

"Absolutely! Why wouldn't you come to Indiana?" said Mario Rodriguez, the executive director of the Indianapolis International Airport. For seven years in a row, it has been ranked North America's best by the Airports Council International.

Opened in 2008, Indianapolis is the first airport terminal in the U.S. designed with post-9/11 security in mind. Its high ceilings and large windows let in ample natural light, which better illuminates the local restaurants and global artwork.

There's even live music on Fridays.

"We've been desensitized, and we've been trained to think that the airport experience is horrible," Rodriguez said. "Why should that be? That only happened just recently. You know, before it was the miracle of flight; traveling was exciting!"

But for most Americans, it's been a long time since flying was anything close to exciting … smaller seats, fuller planes, and often dark, dingy terminals that feel a bit like bus stations.

"We invented the aviation system, and we don't have one of the top 30 airports in the world," said Tori Barnes, a vice president at the U.S. Travel Association. "We don't need a Taj Mahal; we're not asking for that," said Barnes. "We just need the government and private sector to be willing to invest in making it a better system."

The average airport in the U.S. is now 40 years old, and experts estimate $128 billion in new investment is needed over the next five years just to keep up with the growing number of flyers.

Van Cleave asked Barnes, "Things stay the way they are now, will a traveler's experience at U.S. airports get better or worse in the years to come?"

"Quite frankly, we think it'll get worse," she replied.

That fear has led to a nationwide building boom, with major overhauls in progress at nearly 50 airports – including Orlando, Chicago, Los Angeles, and Salt Lake City.

But none is as ambitious as the project underway at what may be America's most notorious airport: New York's LaGuardia.

As Vice President Joe Biden remarked in 2014, "If I took him blindfolded and took him to LaGuardia Airport in New York, he must think, 'I must be in some third world country.' I'm not joking!"

New York Governor Andrew Cuomo knew LaGuardia had become the butt of jokes: "When the vice president made that comment about LaGuardia, many of the New York-area elected officials were outraged that he would criticize LaGuardia. I said the exact opposite; I said, 'The vice president is right!'"

And in 2016 Cuomo made an $8 billion bet he could make those jokes a thing of the past. Three of the four existing terminals are being completely rebuilt to create a state-of-the-art, unified airport.

"We want to have a front door as good as any front door on this globe," he said. "Not out of pride, out of sheer business interest. We want your business. We want you to come here and visit."

Construction at LaGuardia is expected to be complete in 2022, but some new gates have already opened. And while few would confuse it with Singapore, some surprised passengers have wondered if they landed at the wrong airport.

"It's more like a modern airport now," one woman laughed.

"A hundred percent improvement over what the old ones were," one man said.

Eighty percent of the money for the new terminals at LaGuardia comes from the private sector. But these kinds of public/private partnerships don't work at every airport, and many are calling on Congress to allow an increase in fees on passengers to be uised to upgrade facilities.