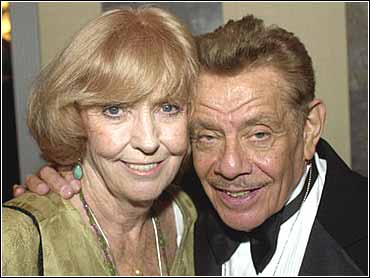 She tells CBS News Sunday Morning Correspondent Rita Braver: "I think we both felt that we had gone out with a number of people. We weren't getting any younger, and that we had a lot in common, and this was the right thing to do at the right time."

Says she: "I was very relaxed. We got married late in the afternoon. I went shopping in the morning."

Harvesting chairs: How an English craftsman shapes furniture from the ground up

Stiller: "Talented! She had great legs. All those things that go with a woman."

Meara: "And I let you sleep overnight."

What makes a great marriage? If anyone knows, it's Lois Smith Brady.

"You can recognize true love, and that's what makes the wedding have that sheer joy feeling," she says.

As writer of the New York Times "Vows" column, she has covered a wedding almost every week for nine years. She has been married for 13. But, even as she watches those moments of sheer joy, she often wonders when the wedding couple will realize just how much hard work they've taken on by consecrating that quirky emotion called love into the formal tie of marriage.

"I just don't think anybody has a picture of it that day," she explains. "It's wonderful to be the center of attention and wear a gorgeous dress. But I don't know if anybody's really thinking what's coming. I don't think many people are. So some people are surprised in a positive way, and some people are really knocked off their feet."

Says Wesley Williams, "We've had all the ups and downs and travails that you would expect...through family deaths, trough strain and political crises, through economic crises, through health crises of our own that we've overcome. It's been wonderful, and, most importantly, somebody there to share everything with."

Americans are definitely schizophrenic about walking down the aisle. In recent surveys, most of us say that marriage is one of our top priorities. Yet, as our population has grown over the past four decades, the proportion of married Americans has dropped 43 percent. And more than half of our marriages end in divorce. That has made some people very nervous.

One of them is University of Chicago sociologist Linda Waite, who, in case you're wondering, has been married for 28 years. She's just co-authored a book called The Case For Marriage: Why Married People Are Happier, Healthier, and Better Off Financially, in which she argues that the decline of marriage is hazardous for society.

What is the economic argument for marriage?

"Because people are married and they expect to be together for a really long time," Waite replies. "They can specialize. One person can take care of the investments. One person can have the car fixed... And because they specialize, they produce more than the same people would if they weren't married."

That almost makes it sound if people don't find someone to marry that they're losers. Already in our society, some people who are single feel really embarrassed about it.

"One of the ways we've asked too much of marriage is that we search for the perfect mate," replies Waite. "More often, lots of people, I think, argue that they're not gonna settle. They haven't found Mr. Right. Maybe there's just a Mr. OK or Mr. Pretty Good."

Okay. So not everybody finds love at first sight.

Says Anne Meara: "No, no, nothing clicked. That's that fairy tale bologna. Nothing just clicked. I would say...I've grown to really love Jerry. But I would say, in the last 10 minutes."

But, for some, there is that one, incredible moment:

Says David Ngai, "When I first saw Diane, I said, 'Wow! I think she's beautiful.' And we started dating, and I cooked a meal, and she loved it. She's the only one that loved my food. It's unbelievable."

Figuring out why some couples click instantly, why some marriages endure while others fall apart, has become a national obsession. Researchers have actually trained cameras on couples for up to 12 hours in a tiny apartment on the University of Washingon campus in Seattle. It's called The Love Lab. Its object: To find out how marriages really work.

The project is headed by Dr. John Gottman. He and his team ask the couples to wear monitors as they talk about such stressful subjects as whether to have a baby.

Explains Gottman, "We get physiological measures of how fast their hert is beating, and how fast their blood is flowing...how much they're sweating and things like that."

But he also says that just because a couple fights lot, that doesn't mean they don't have a happy marriage.

"We have a group of...very passionate, romantic couples," he says, adding, "They sort of enjoy...the bickering and the arguing... I mean, to them, it symbolizes real involvement and connection."

John Gottman and his wife, Julie, also a therapist, have been married for 16 years, and they say couples who come for help at their Gottman Institute are serious about trying to make their marriages work:

"In the past," says Julie Gottman, "I think 20 years ago, people were more prone to kind of sit and tolerate the pain of bad marriages. Today, they're really trying to do something to change them."

Says John Gottman, "I think romance is really critical... But what we've found is that it's in the small moments with one another, the every-day moments where you're really asking each other questions and saying, you know, 'How are you?' At these very small moments, we build romance and passion and good sex."

And, even for veteran wedding watchers like Lois Smith Brady, the magic doesn't have to end.

"I mean, the giddiness on the wedding day, the hope, the unbelievable dreams of what will happen... I do think some people end up at 80 years old and maybe even really surpass that dream that day," says Smith.

Stiller and Meara might be on their way. Says Stiller: "I'm still so crazy about this woman, I was never this nuts about a woman in all my life."

Quips his wife, "He's weird that way... I'm like some fantasy of his I could never live up to."

And the final word from newlywed Marshall Kiev (just married to Johanna Azoulay):

"It's so great, finding a partner that I can spend the rest of my life with. So much fun! So sweet!"

Rita Braver herself has been married for 28 years to Robert Barnett. Her recipe for a good marriage: "I've always thought it was to make sure you always kept your sense of humor." Adds her husband: "A sense of humor - and separate bathrooms."