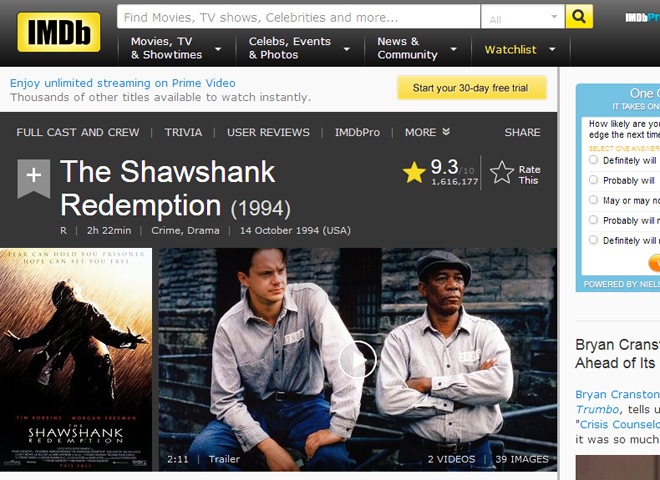 The Internet Movie Database is the go-to website for movie fans which recently marked its 25th anniversary. Our Elizabeth Palmer found its creator -- where else? -- at the movies:

Last fall, at opening night of the movie "Suffragette," the stars were strutting their stuff on the red carpet. There's Meryl Streep! And here's Geena Davis!

But the biggest Hollywood insider there that evening was strolling through the London streets with his wife completely unrecognized. He's Col Needham ... a walking movie encyclopaedia, and the founder of IMDb.

The Internet Movie Database was one of the very first websites, and is now one of the most popular. Its focus may be Hollywood, but it was born in rural England, where Needham still lives and works (if you can call it work).

"Yes, so I have 11,000 Blu-rays and DVDs, and I can start any of them from just the press of a button from here," he said at his home cinema.

His all-time favorite is Hitchcock's "Vertigo." He first saw it on the 22nd of November 1989, which he knows because he recorded it in his film diary. "I have the date I've seen every movie I have ever seen since the 1st of January 1980."

"Would you forgive me if I say that's a bit nerdy?" said Palmer.

IMDb started in 1990 when Needham, a young computer engineer, posted his film diary on the embryonic Internet to share with other movie fans.

"It had basic information," he said. "You could search for movies, TV shows and people."

IMDb was bought in 1998 by Amazon's CEO Jeff Bezos, as a powerful tool to help Amazon expand beyond books and into movies.

And how much did he pay? "That's not a number that we've ever disclosed," Needham replied.

That's another way of saying "a lot."

And when he decided to stay on as CEO, Needham became a player, in charge of a site that now offers everything from actors' biographies to a place fans can share "Gotchas," like the time-travelling iPhone in "True Story."

"There's an advanced model of iPhone that didn't exist at the time the film was set," Needham explained. Ooops!

IMDb has a Starmeter -- fans can click to rate who's hot and who's not. The actor Rob Pattinson got so many clicks he was invited to audition for the blockbuster vampire movie "Twilight," and he landed the hero's role.

Has he sent a thank-you note? "I've met Rob and we've talked about it; we have smiled about this!" Needham said.

Even Steven Spielberg uses IMDb, as Col discovered when they met at the Oscars. "Steven grabbed my hand and he said, 'Oh, thank you. I love IMDb, I use it all the time. I've used the app during the ceremony tonight.' It was just wonderful. And I got to tell him how much I love 'Jaws.'"

And he does really, really love "Jaws" ... and all movies, for that matter. Col Needham's passion is as pure as ever.

The first movie he ever saw was "Snow White and the Seven Dwarfs." "I was 5," he said. "I was in love with film from that point onwards, yeah."

Fast forward to IMDb's 25th anniversary celebration not long ago, at an intimate dinner for his local British staff.: "It's remarkable that's come from something that's just my online film diary to something that's used by 250 million people around the world every month. So, cheers!"

And later, a star-studded gala in Hollywood.

But when the party's over, you know exactly where Col Needham's heading; after all, he's got a job to do.