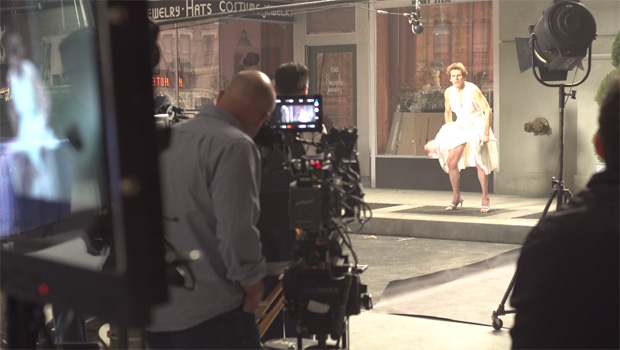 A National Retail Federation survey finds that nearly 18 percent of Super Bowl viewers will be watching not for the game, but for COMMERCIALS. So which ones will score big tonight? Here's Anna Werner:

They're the ads that made Betty White a football player, and cast bad boy actor Danny Trejo as Marcia Brady. Snickers scored big with viewers with those ads, but it's Super Bowl time again, and the problem for the brand is, how do you raise the bar?

That's the challenge for Peter Kain, who directs the Snickers campaign at ad agency BBDO.

"People want something new," he said. "They don't want the same old thing. So we have to, kind of, work within the structure we have, but try to bring it to life in new and different and surprising ways."

This year's spot is different for sure: It features actor Willem Dafoe, in a dress, as Marilyn Monroe.

As we saw on the set a few weeks back, Kain and his crew pumped up the ad by casting another familiar face: Eugene Levy, ad-libbing lines as the prop guy running the wind fan under Dafoe's dress.

"How many shots does it take to blow some air up a dress?" Levy asked.

"It's funny to see him in the dress," said Werner. "On the surface, just kind of funny."

It better be funny.

Snickers' entire brand strategy is riding on this one ad campaign, and the ad will replay thousands of times this year, says Allison Miazga-Bedrick, the marketing director for Snickers.

She admits getting noticed via the Super Bowl is expensive, although she won't say how expensive.

Why is it worth it?

Which is why Kain and his team spent weeks in an edit room.

"When it's Super Bowl, It's like all eyes are on it," said Kain. "It's the one time, like, my high school friends care what I'm doing!"

Super Bowl ads didn't always carry such weight. But then came this Apple ad from 1984:

"The Apple ad set off the idea that if you would pay attention to the commercials and stop talking and stop eating and stop running to the bathroom or the kitchen, that you will be rewarded with new, funny, different, interesting, heartwarming, schmaltzy, hilarious, surprising commercials," Elliott said.

And so came the frogs, the dancing monkey, the Bud Bowl, and mini-Darth Vader. Even a FedEx spot parodying what's supposed to go into a Super Bowl ad.

Most of those commercials were created by big ad agencies. But for the 10th year, the little guy gets a shot with Doritos' "Crash the Super Bowl" contest. This year 5,000 people submitted their own homemade Doritos ads in hopes of making the cut.

Aspiring filmmaker Jacob Chase is one of three finalists this year, with this ad, featuring, in a starring role, his dog, Miz:

Total cost to Chase? "Honestly, we spent altogether about $1,000," he told Werner. "It was really my closest friends and family -- that's how we were able to make it."

The winner, who gets a million bucks, will be revealed during the game.

So, Chase admits -- like many of us -- he'll only be watching for the commercials.

Werner asked, "Do you know who's playing?"

"Do I know who's playing?" he laughed. "Honestly ... I know the Broncos are playing, right? That's one. That's embarrassing!"