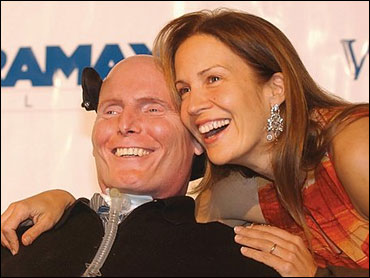 Christopher and Dana Reeve - the man who played Superman and the woman who quite literally saved his life - are the subject of "Somewhere In Heaven," a new book chronicling their tragic love story.

In 1995, Christopher was thrown head first from a horse at a jumping competition. America's Superman was paralyzed from the neck down and bent on suicide.

In an exclusive interview with The Early Show, author Christopher Anderson discusses how the couple first met and reveals the pact Dana made with her husband right after his accident - a pact that would keep him alive another ten years.

The book contains never-before-seen photographs taken of the couple in 1987, just shortly after they met.

"It was love at first sight for Chris," Anderson said, describing photos in the book. "They were at the Williamstown theater festival. He was a big movie star. She was singing. He walks into a cabaret and sees this beautiful 26-year-old. He said 'I fell hook, line and sinker.' She had to be persuaded. She wasn't quite sure what he was up to. He charmed her pretty quickly."

According to Anderson, the couple fell in love rather quickly but it took some time for them to walk down the aisle.

"After four years she wanted a commitment," Anderson said. "Her parents had been married 45 years. His family was shattered. His parents divorced, remarried. He had siblings and half siblings. He didn't believe in marriage. She said, 'look, we're going to call it off.' He said, 'no, no let me go through therapy' and he got over his fear of marriage. She became pregnant with their son Will and got married right after that."

Immediately after the 1995 accident, Christopher lay in an intensive care unit with two crushed vertebrae, wanting to die.

"I don't think people realized the extent to what he was insisting on - pulling the plug," said Anderson. "I talked to the surgeon who reattached his skull to his spine. He told me that, 'oh, yeah he wanted to end it right then' because he didn't feel his life was worth living.' Here was a guy who got up every morning not knowing whether he was going to fly a plane, sail his yacht, or play tennis and now he can't feel and he can't move."

It was Dana's words that kept Christopher going, according to Anderson.

"She said 'I still love you.' Then she made a pact with him. 'Hold on for two years, if you still feel this way two years for now we will reconsider this question.' She said that was just a sales ploy," said Anderson.

Anderson said Dana saw a higher purpose for the couple.

"Peter Kiernan, who's the chairman of the foundation and a good friend of theirs said Dana saw around the corner first. She saw the new purpose that both she and Christopher would have as humanitarians and advocates for the disabled," he said. "Not that she didn't suffer. I spoke to people at the hospital and they said at this period she was offered the services of a massage therapist there to relax and she said 'no, I can't let go. Because if I do I'm afraid I'll just start crying and never be able to stop.'"

The couple's affection for one another was always apparent, Anderson said. Even though Christopher couldn't feel his wife's touch, she was constantly putting her hand on his arm or nuzzling his cheek.

He survived almost ten years after the accident, until his death from heart failure at 52 on Oct. 10, 2004.

"The book really stresses, too, the extent to which she suffered following his death," Anderson added. "A lot of people don't realize that within months of Chris's unexpected death she suffered the sudden loss of her mother, whom she was very close to. Then, Dana was diagnosed with stage 4 lung cancer."

Despite everything, said Anderson, Dana managed to stay positive.

"She wasn't just resilient," he said. "She was joyful about life. I think that really came through. She made jokes about being called a saint all the time. She didn't like it. She said 'I'm just a woman whose husband fell off a horse and I'm taking care of him and that's what you do.'"

To read an excerpt from "Somewhere In Heaven," click here.