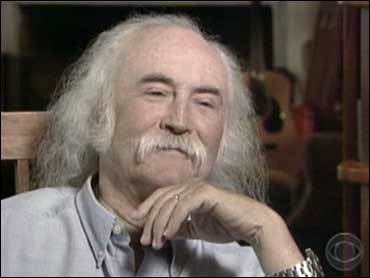 David Crosby has been captivating us with his performances for 40 years now. And his musical voyage continues. Rita Braver has a Sunday Profile:

This is the famous, fabulous David Crosby, the legend in his own time.

As a member of Crosby, Stills and Nash, David Crosby has made some of the most famous music in rock 'n' roll history.

The captain of the 74-foot schooner "Mayan" has been at-home on the water for a long time.

This wooden ship is one constant in a life that's seen its share of ups and downs.

Crosby actually wrote some songs on his boat. "I wrote many songs on this boat," he said. "Down in that main cabin there, I wrote 'Wooden Ships,' I wrote 'Page 43.' I wrote 'Carry Me.'"

Crosby prides himself on making his music a bit mysterious:

"If I wanna talk to you about that dock, well, the answer is not to write a song saying, 'Look at the great big dock, it's made out of wood, don't you think it's cool?' That's not it. The best songs take you a while to digest. And no two people get exactly the same picture from them, because they ignite a little fire in your imagination."

And since the 1960's, he has fired up lots of imaginations as a member of the legendary Crosby, Stills and Nash.

How did he get top billing?

Long before David Crosby got together with Stephen Stills and Graham Nash, he was growing up in California. He still lives in the hills north of his hometown of Santa Barbara.

One interesting item on display: his dad's Oscar. His father, Floyd Crosby, was a Hollywood cinematographer.

"That's one of the first Oscars that got issued," he said.

Braver asked how he discovered music.

"You know, it just kind of snuck up and kissed me on the ear," Crosby said. "We didn't have a TV, so we sang songs. So I started singing harmony when I was about 6."

He loved music so much he dropped out of college to pursue his passion. In 1964 he joined another big-time rock group, The Byrds, but his stint with the band came to an unhappy end.

"Why'd they throw you out?" Braver asked.

"I wasn't that easy to handle," Crosby said. "I had a big ego, and I wanted them to play my songs. I was starting to write pretty good songs."

By then he had made some pretty good friends in the California music scene, including Joni Mitchell and the Mamas and the Papas.

From 1969 on, Crosby, Stills and Nash - sometimes playing with their friend Neil Young - went on to create their own brand of classic American Music, becoming one of the most popular groups in rock and roll history. Their first two albums alone still sell more than a million copies a year.

But for David Crosby, the good times were soon overshadowed by a growing addiction to heroin and cocaine:

"What happens to you is that it starts running your life," he said. "After years of doing it, it's in charge and you're not."

He spent, in his words, "many, many millions of dollars" on drugs.

In 1985 his addiction cost him even more: his freedom. He was sentenced to prison on drug charges and served a year and a half. In prison he went cold turkey, and came out determined to stay sober.

He returned to the stage immediately after his release, accompanied by his best friend, Graham Nash. To this day, the two often perform as a duo … kind of a refuge from the infamous ego battles that could dominate Crosby, Stills, Nash and Young tours.

"We just take little hiatuses," Crosby said. "The idea when we started was that we would work in all these different combinations on purpose, and that's why we used our own names. That's why we didn't call it the 'Fat Dollop,' or you know, the 'Purple and Red Dinosaur.'"

As for his most "significant other," in 1987 Crosby married his longtime girlfriend Jan Dance, who had conquered her own drug problems.

"I think we saved each other's lives," he said.

"The French having a saving for it, raison d'etre," Crosby said. "A reason for being. And we have that."

But just as Crosby seemed to have put his life back on track, in 1994 he learned that his hard living past had caught up with him.

"I go to a doctor's office and he says, 'David, somewhere back there you contracted Hepatitis C, and you're dying. You're down to about maybe 20 percent of your function on your liver now, and you're gonna die very soon if we don't get your transplant.' Then in the middle of that, another doctor says, after five years of trying, 'Jan's pregnant.'"

"And so I'm sitting there thinking, 'Okay, I'm dying. Am I gonna die before I get to see this child born?"

The good news is that Crosby did get a liver transplant, and Django Crosby - now 12 - was the child Jan and David had long hoped for.

But there's more: just before Django was born, Crosby got a call from a son he'd fathered out of wedlock, and had been given up for adoption in 1962.

His name is James Raymond - and remarkably, he's a musician also.

The two sometimes perform together…

"He's more talented than I am by a considerable amount," Crosby said. "And I'm not being humble here - he's really, really, really brilliant."

And just when you think David Crosby's life can't be any more dramatic, you say, 'Wait a minute - wasn't he the guy who donated sperm so that Melissa Etheridge and her then-partner Julie Cypher could have children?' He was … and it was his wife's idea

"You offered him first?" Braver asked.

"I did, and you know in retrospect, I have to honestly say the moment was so pure that I didn't have to question it."

Crosby didn't question it, either.

The Crosbys get to see the children frequently. And as for what's on the horizon for David Crosby:

"If I can spend time with Django and Jandi, and if I can live more life, make more music, there will come a time when I will go for one last sail, and it'll be okay."