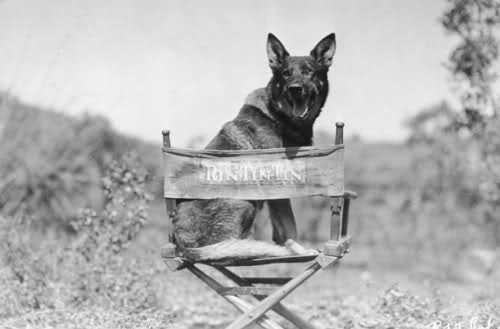 The rise of Rin Tin Tin is a classic only-in-America story, and here's our Rita Braver to tell it:

Meet Rin Tin Tin the XXII, spokesdog for the American Humane Association, who recently presided over the ringing of the closing bell at the New York Stock exchange.

And if he seems at home with the cameras, and the attention, it's no surprise.

This Rin Tin Tin is heir to a dynasty of celebrity canines. After all, a lot of us still remember "The Adventures of Rin Tin Tin" on TV back in the 1950s and '60s.

"The number of people who declared 'Yo, Rinty,' which was the sort of signature phrase of the TV show, was heartening, said Susan Orlean - heartening enough to inspire her to write a whole book about the legend of Rin Tin Tin.

"I think he's a wonderful symbol of something innocently heroic, Orleans said, "a living being who has embodied qualities that we have always thought of as American - of being independent, of being tough and brave."

It's a story that may surprise you. Did you know, for instance, that the first Rin Tin Tin was a star in silent movies in the '20s, celebrated as an athlete AND an actor?

He had an incredibly expressive face, and managed to convey something very intelligent ... and very profound.

Orlean spent a decade tracking down the facts, with help from Kevin Hallaran, archivist at the Metropolitan Museum, in Riversid, Calif., hometown to Lee Duncan, a young World War I American gunnery corporal.

As shown in the film, "Finding Rin Tin Tin," Duncan discovered a family of German Shepherds after a battle in France, named one of them Rin Tin (after a popular French folklore character), and managed to spirit him into to the U.S.

"Every hope and dream he had seemed to be focused on Rin Tin, and he felt there was something about the dog that was exceptional," said Orlean.

He even went as far as writing a screenplay for Rin Tin Tin, to star in a movie.

So how did he get his "paw in the door" in the movie industry?

"Hollywood was very different back then," said Orlean. "Lee literally took the dog - screenplay under one arm, dog's leash in the other - walked up and down Sunset Boulevard knocking on doors and saying, 'I've got this terrific dog. I also have this screenplay. Give us a shot.'"

And the fledgling Warner Brothers did, greenlighting Duncan's film, "Where the North Begins," with Rinty playing a noble dog raised by wolves.

"He was probably the most profitable star Warner Brothers had," Orlean said. "Every time they got into trouble, they would release a Rin Tin Tin film and bail themselves out. So they referred to him as 'the mortgage lifter.'"

At one point Rinty was said to be getting 50,000 fan letters a month. He and his mate were written about as a Hollywood couple: "Mr. and Mrs. Rin Tin staying in the bridal suite."

"In one case, Nanette is supposedly interviewed saying 'She's gonna give up her acting career until the puppies are older,' and this was all written with a very straight face!" Orlean said.

But when talkies came in, like a lot of other silent film stars of his day, he was fired.

Rin Tin Tin went on the vaudeville circuit, with other big stars, and he did find some work in talkies, including the "Lone Defender" series, which was panned by critics, although the public still loved Rinty.

When Rin Tin Tin died in 1932, it was big news - but not the end of the Rin Tin Tin saga as far as Lee Duncan was concerned.

"He became inflamed with this passionate commitment to maintaining this legacy," Orlean said. "And he began saying, 'There will always be a Rin Tin Tin.'"

So, one of Rin Tin's puppies, known as Junior, became the heir ... though he was considered a poor performer.

And as for the next Rinty?

"You suggest there may be a little scandal around Rin Tin Tin III?" asked Braver.

"Yes," said Orleans. "Rin Tin Tin III, who is supposed to be Junior's son, doesn't look anything like Junior."

But direct lineage or not, Rin Tin III enlisted in the Army in World War II.

In fact, he was an important symbol for the Army at a time when American pets were being recruited for the U.S. military's first K9 Corps.

"I mean, people were being asked to part with their dearest companions and send them to the Army without any guarantee they would come back," said Orlean. "So the Army needed to inspire people to do that. And Rin Tin Tin was the perfect model for that."

So Rinty was still very much in the public eye in 1954, when his TV show, "The Adventures of Rin Tin Tin," launched.

It was a huge hit, spawning all sorts of products, from wallets to games and feeding bowls ... and a legendary feud with another canine star.

Orlean said the rivalry between Rin Tin Tin and Lassie "kind of prefigured the Rolling Stones vs. The Beatles. You kind of had to choose whether you were a 'Lassie person' or a 'Rin Tin Tin person.'"

In 1960, Lee Duncan, the man who made Rin Tin Tin a legend, died, leaving behind a big mystery: Why the original Rin Tin Tin, who had been buried in California, was later entombed in a pet cemetery in Paris, France?

"I think like a lot of the story, some of it is just believing," said Orlean, "and what I have to think is that there was some motivation that Lee had. And maybe part of it was simply the feeling that Rinty should go back to where he was found."

But no matter where he is buried, Rin Tin Tin embodied the Spirit of America ... and his descendants still do.