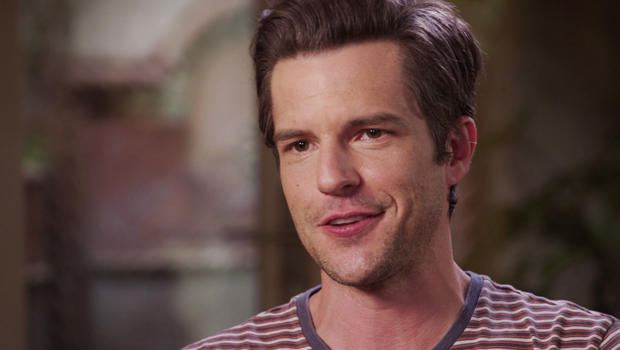 The Las Vegas band The Killers is not at all as menacing as their name suggests. Kristine Johnson has the proof:

It's a little hard to know just what to make of Brandon Flowers. Backstage, he looks like his nerves are going to get the best of him.

"You seemed very intense right before the show," said Johnson.

But then he steps into the spotlight in front of his band, The Killers; and performing their signature hit, "Mr. Brightside," he sounds like Mr. Confident.

One measure of the song's success:  It's been watched on YouTube more than 280 million times.

Flowers refers to himself as a "glorified Elvis impersonator. That's all I am, really. That's what all of us are!"

If you're not familiar with The Killers, their hit list extends over some 24 million albums sold worldwide.

They hail from Las Vegas, and are so closely tied to the region you might have heard them in this Nevada tourism commercial:

He and his wife, Tana (they have three boys together), met cute: "We saw each other, but I would have been too shy to talk to her," Brandon said. "And she came up and gave me her phone number."

And they kept that piece of paper.

If they seem like an unusually clean-cut rock-and-roll couple, it may be due in part to their Mormon faith. Brandon even participated in an ad campaign for the church.

"I don't go to church because I got nothing better to do on Sundays; I really believe it!" he laughed. "I don't know what my life would be like without it. I think I would have been a casualty of rock 'n' roll."

As faith was in Flowers' blood growing up, so was the glitz and grit of Vegas. "We're not shy about it; I still get a rush from it," he said.

That "rush" from the Vegas Strip is something that Flowers, and Killers drummer Ronnie Vannucci, experienced early on.

"My mom worked at Caesars," Vannucci  said. "She was a cocktail waitress."

"The service industry is a big part of this town," Flowers said. "And it's how a lot of our family make their living still, yeah."

And after high school, it's where they found their first jobs. Flowers was a food runner at a restaurant called Josef's Brasserie. Vannucci drove a pedi-cab.

Their band's first performance, in 2002, was in a small coffee shop just off the Vegas strip. "Probably lasted about ten minutes, but it felt like an eternity, it did!" Flowers laughed.

"And when you left there, I mean, what were you saying?"

"I was totally open to looking for another singer, yeah. I didn't think that I would do it again. We didn't get a good vibe from Vegas crowds for a long time."

Vannucci added, "The vibe we got was that, 'What the hell are these guys doing? What is this?'"

Flowers said the band played for just about every major label in the U.S.: "And none of them were pickin' up on us. The president of Warner Brothers said I didn't have enough sex appeal."

But The Killers had an ace in the hole: That song, "Mr. Brightside."  Guitarist Dave Keuning came up with a riff that's become instantly recognizable.

"Mr. Brightside" skyrocketed up the charts.  With Mark Stoermer on bass, the Killers became headliners.

But as they toured the world, they say, they never forgot their roots.

Service industry employees get a shout-out in the Killers' 2013 "Shot at the Night":

And as they sold out stadiums, they were suddenly hanging out with their idols, like Paul McCartney, Elton John and Bono.

Keuning said, "You're still starstruck secretly, even though you're playing it cool and pretending like it's normal."

Clearly, Flowers has overcome that difficulty. In fact, consider what he did when he was composing for the Killers' latest album, and found he had a case of writers' block:

"I can't do it without name dropping. I emailed Bono. And in the subject I put, 'Have all the songs been written?' And then I poured my heart out about how I was in a slump. And his answer was, 'Have All the Songs Been Written is a fantastic song title!'"

The Killers' latest album debuted at number one. As its first single showed, these days Brandon Flowers appears full of self-confidence, if not outright swagger. Elvis himself would be proud.