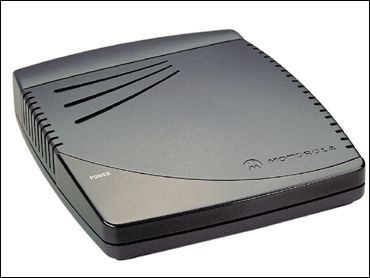 "Internet telephony" has been around for several years but, thanks to companies like Vonage, it's finally ready for prime time. Vonage offers a service that lets people with high-speed cable modems or DSL lines to make and receive local and long-distance calls using a regular phone pretty much as they do now. Instead of using traditional phone companies like SBC, Verizon and other "Baby Bells," Vonage is routing the calls through the Internet.

There is nothing new about Internet telephony. What's different about Vonage is that it's easy to use, requires virtually no change in calling habits and the call quality is as good as or better than a regular phone line. There is a single monthly cost, with no charge for any calls placed in the United States or Canada, and lower-than-usual costs for calls overseas. Most Internet phone services require you to make or even receive calls from a PC. Vonage allows you to use your existing telephone.

I've been using the Vonage service for about a week for virtually all my local and long-distance calls and the quality is terrific. I've even used it for some radio interviews where sound quality is paramount.

Vonage, at $34.99 a month plus a one-time $29.99 activation fee for unlimited service, requires that you already have a high-speed broadband service such as a cable modem or DSL line. The kit comes with a small analog telephone adapter that plugs into your broadband modem or your local network hub. For people who don't make a lot of long-distance calls, Vonage also offers a service for $24.99 a month that comes with free local and regional calling and 500 long distance minutes. Additional long distance minutes are 3.9 cents.

The first thing I noticed when I installed the Vonage system was that it was easy. I expected to have to go online to enter my Internet Protocol address and other configuration issues, but the device came preconfigured. I simply plugged the small adapter into my network hub, plugged a phone into the device and made my first phone call. If you want to connect more than one extension you'll need some type of splitter such as Radio Shack's $10.95 "1-5 Jack Adapter" that allows you to plug five phones into a single jack. If you decide to use Vonage to replace your existing phone line, you simply plug the adapter into any phone jack to provide service to all phones in your home.

Once I plugged in the phone, the service worked exactly like my old-fashioned phone service with one exception. With Vonage, you have to dial area codes for local calls. Some local phone companies require that as well. Other than that, there were no changes. I even plugged the Vonage adapter into my multi-line phone and it worked fine. It also works with cordless phones.

In addition to basic phone service, Vonage offers a number of free advanced services for which local phone companies typically charge. You get free voicemail, call-waiting, three-way calling, call-forwarding, repeat dialing (calls back if the number is busy). There is also free call transfer that allows you to transfer a call to another number and then hang up. The call-forwarding feature can be configured to forward the call after a specified number of seconds. If I don't pick up my Vonage phone within 30 seconds, the calls are automatically transferred to my cell phone. My local phone company (SBC) offers this service (called Delayed Call Forwarding) for $2.75 a month. All advanced services are configured via Vonage's Web site and can be reconfigured as often as you like.

Vonage charges for calls outside the United States and Canada but overseas calls are cheaper than most long-distance services. London, Hong Kong, Berlin and Moscow are 5 cents a minute. Tel Aviv and Tokyo are 6 cents.

Another advantage to Internet telephony is that you can take the service with you. If you're going to somewhere that has a broadband connection, you can plug the adapter into that system and use the service just as if you were home. That means free calls back to the United States from overseas. I know someone who visits London frequently and stays at a hotel with in-room broadband. She brings her Vonage adapter with her and not only makes outgoing calls, but receives calls in London at her regular U.S. phone number. That means her friends can call her for free while she's overseas, hopefully mindful of the eight-hour time difference.

Vonage users can select any U.S. area code and, for $4.95 a month extra, you can get additional virtual numbers. If you live in Los Angeles, for example, you could have both a local number and, say, a New York number. This gives small businesses a "local" presence in other cities and also makes it possible for people in those cities to call you toll-free. If my son winds up going to college in Boston, I'll consider an extra number with a 617 area code so he can call home for free.

Thanks to services like Vonage and cell phones, an increasing number of people are saying "goodbye" to their local phone company. It's possible to use Vonage to completely replace your existing phone service but I don't recommend it. Vonage won't work if there is a power failure or if your Internet service goes down. In case of an emergency, I recommend that you have at least one standard (corded) phone that doesn't require electricity.