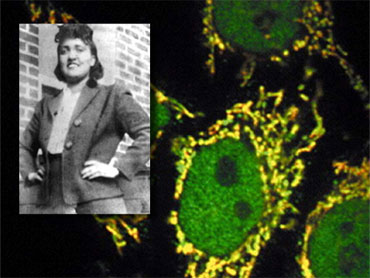 The gift of life is surely the greatest gift of all. So how could the story of a remarkable woman who gave that gift over and over again have been overlooked for so long? Here's Jim Axelrod now to set the record straight:

Somewhere in the humble family cemetery off a country road in the town of Clover in southern Virginia, a woman who died nearly 60 years ago lies in an unmarked grave.

It is a shame, because the world should know her name: Henrietta Lacks.

She was a poor, African-American tobacco farmer, a mother of five children, who died of cervical cancer when she was 31.

She was also, says Rebecca Skloot, one of the most important unknown figures in medicine, "and she had no idea."

Skloot, a professor at the University of Memphis, devoted 10 years to telling her story, writing the current bestseller, "The Immortal Life of Henrietta Lacks."

The story starts near the end of Henrietta's life: in 1950 the great-granddaughter of slaves was being treated for cervical cancer at Johns Hopkins Hospital in Baltimore.

Without her knowing, and unrelated to her treatment, doctors took some of her cells for research.

"She happened to walk into Hopkins at a time when scientists were trying to grow human cells in culture and were taking cells from anybody they could," said Skloot.

By the late 1940s scientists were on the brink of a golden age of medicine, Jonas Salk was racing to develop the polio vaccine, but his work - and that of countless others - was hampered because they lacked a critical tool: human cells for testing.

Scientists had been trying for years to keep human cells alive in the lab, but none of them lasted very long, until Henrietta Lacks showed up at Hopkins.

"With her under anesthesia, they just took this small piece of her tumor, without her knowing, and they put it in a dish and sent it down the hall to George Guy, who was the head of tissue culture research at Hopkins," said Skloot. "He had been trying to grow human cells for decades, and it had never worked. And hers just took off."

"Took off" doesn't begin to describe it. For the first time in history, human cells could be grown and infinitely replicated, outside the body.

Henrietta Lacks died in October 1951, just 8 months after seeking help at Hopkins. But her cells lived on, multiplying by the billions.

Why? What was there specific to Henrietta Lacks' cells?

"We know, mechanically, that the cells stay alive because they have this enzyme in them that rebuilds the ends of their chromosomes, so the cells just never get old, they don't die," Skloot said. "But why her cells did that when all the other cells didn't is still a little bit of a mystery."

To this day, "HeLa" cells - named by combining the first two letters of "Henrietta" and "Lacks" - are a cornerstone of modern medicine.

"To tick off all the way HeLa cells have been used, we would be sitting here for weeks," Skloot told Axelrod. "Hundreds and thousands of studies. They were used to help test the polio vaccine so that it could be approved for use in people. They went up in the first space missions to see what would happen to human cells in zero gravity. Hers were the first cells ever cloned, some of the first genes ever mapped. They've been used to create some of our basic cancer drugs, like tomaxiphin.

"I mean, the range of things that HeLa cells has been used for is, kind of, incomprehensible."

"It sounds like it's hard to imagine science in the last half-century without Hela cells," said Axelrod.

"Oh yeah! Scientists I've talked to say you cannot overestimate how important HeLa cells have been."

Yet no one in the Lacks family had been informed by Johns Hopkins of the existence of their mother's cells, until a researcher called in the early 1970s wanting to test the family.

"Henrietta's husband basically got a phone call one day," Skloot said, "and the way he understood it was, 'We've got your wife, she's alive in a laboratory, we've been doing research on her for the last 25 years.' The only cell he'd ever heard of was the kind in a prison, and he literally thought, 'Okay, so, they have her in a cell? They have part of her in a cell?'"

The news left the Lacks family confused . . . and scared.

"When you look at this in the context of the family story, you know, at 25 years after her death, not only were her cells still alive, but there were enough of them that if you could pile them all on a scale, they'd weigh 50 million metric tons," Skloot said. "That's 150 Empire State Buildings. You know, it's just inconceivable that that could even be true, and it was."

"I almost feel raped, like the family feels raped," one Lacks family member told Axelrod. "You know, they did it, and nobody told it."

"For the family, Johns Hopkins is absolutely the bad guy,' Skloot said.

"Johns Hopkins needs to do a better job of communicating with the family and recognizing it," said Dr. Daniel Ford, a vice-dean at Johns Hopkins School of Medicine.

Using Henrietta's cells for research, he maintains, was standard practice for the time.

"I think if we go back to that time and compare it to now, there was probably more of a focus on the science and discovery, with less consideration of what it meant to that individual that was going to be part of the scientific process whether they knew it or not," said Dr. Ford.

The hospital is working on acknowledging the Lacks family, but it's a tricky situation.

"The reason why is although the Henrietta Lacks case is the one that we're talking about and has the highest profile, that is not the only patient that has contributed to the research agenda of Johns Hopkins or the nation," said Dr. Ford. "So one of the issues is talking about precedent and what does that mean?"

What that means, among other things, is money. And while Hopkins claims it never sold HeLa cells, the same can't be said for medical supply companies.

"Is there any way to calculate how much money has been made off of Henrietta Lacks' cells?" Axelrod asked.

"No. They were the first cells ever commercialized, and that was in the 1950s," said Skloot. "You know, you can buy online HeLa cells or products made from HeLa cells for anywhere from about $200 to about $10,000 a vial."

"But it's an incalculable amount of money?" Axelrod asked.

And consider this: The family of the woman whose cells changed medical history . . . can't afford health insurance.

Henrietta's middle child, Sonny, is $100,000 in debt after bypass surgery.

"How does that leave you feeling?" asked Axelrod.

No medical coverage, no money, and there's one more thing the Lackses and Henrietta have gone without: recognition.

"You know, Hopkins got a wing for this and a wing for that," said another Lacks family member. "It would be nice if they had a Henrietta Lacks wing."

Lawrence Lacks, the oldest of Henrietta's five children, said, "Well, one thing I'm going to say is I think it's wrong, out of all that money they made off my mother, she's down there in Virginia in an unmarked grave."

That's about to change.

Just last week Henrietta's family learned the exact location where their mother is buried, right next to her mother, Eliza Pleasant, in the shade on an old oak. A donated headstone will be placed there come spring.

"They used to tell me stories about my mother, you know? She was a giver," said Sonny. "And she's doing it, you know? She's still giving.

"And to me, it just feels good about that. Mama, who gave so much, Henrietta Lacks is still living today."

Sigourney Weaver on her unpredictable career
Thanks for reading CBS NEWS.
Create your free account or log in
for more features.
View CBS News In
CBS News App Open
Chrome Safari Continue
Be the first to know
Get browser notifications for breaking news, live events, and exclusive reporting.