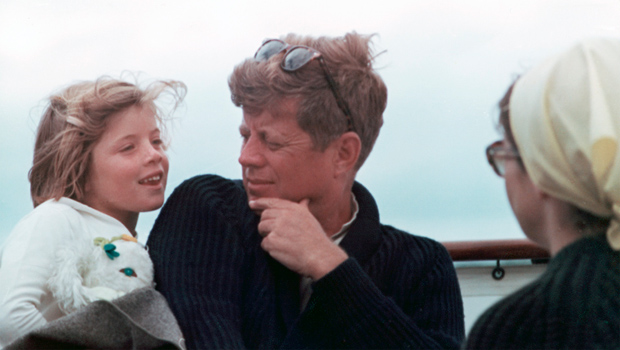 (CBS News)  Glamorous and dashing as John F. Kennedy appeared in life, he has become even more so in retrospect, thanks in large part to a highly-publicized comparison that evoked an imaginary golden time. Martha Teichner traces the fable to its roots:

It was Jackie Kennedy who brought up those lines her husband loved from a Broadway show:

Don't let it be forgot
That once there was a spot ...
For one brief shining moment called Camelot ...

It was in an interview with Life Magazine two weeks after JFK's death.

She said, "There'll be great presidents again, but there'll never be another Camelot again."

Yes, Camelot, like King Arthur's mythical land, so powerful an image that 50 years later, say the word and this is all most of us see, as if there'd been no dark side.

The mythmaking began when JFK's presidency was an ambition, long before it was a fact.

What we think of now as the classic Camelot pictures were Joseph Kennedy Sr.'s idea. He had run a Hollywood movie studio.

"He was a visionary," said Indira Williams Babic, curator of "Creating Camelot," at the Newseum in Washington. "He recognized from very, very early in the game the power of the image. . . . It's a vision of a royalty-type family."

The exhibition features images by Jacques Lowe, the photographer Joe Kennedy hired in 1958 to, in his words, "sell Jack like soap flakes."

"The last person he wanted to see was a photographer. But you know, when Daddy said, 'Hey, this guy's coming up,' 'Okay.'"

Babic showed Teichner the images Lowe took that day: "This is the first photo in the shoot, and you can see that [Kennedy's] still not very enthusiastic about doing this on his day off. And then Caroline gets introduced, and his face just lights up."

When JFK saw the pictures, he got it.

Jacques Lowe became the Kennedys' personal photographer. He left shortly after the Inauguration, and the position of Official White House Photographer was created. There had never been one before.

The Kennedys did, and didn't, look like everybody else's family. They were rich and sleek, and the camera ate them up. The president was shameless about having his children photographed, often against Jackie's wishes.

Whereas their predecessors in the White House -- the Trumans and the Eisenhowers -- were in black-and-white, Jack and Jackie were, it seemed, in color.

"There are these people who transcend ordinariness," said JFK biographer Richard Reeves, editor of the book, "Portrait of Camelot," featuring photographs by Cecil Stoughton. He said it was the imagery that disproved their ordinariness.

"They were beautiful, they were young, they were hip, candid, if not always telling the truth," said Reeves.

Theirs was a fabulous picture story, well-edited. Another Joe Kennedy quote: "It's not what you are that counts, but what people think you are." Americans didn't see Jackie smoking, didn't know that the pictures could lie.

"We, the American people, thought that John Kennedy was kind of the image of energy and good health, when in fact he was sick his whole life," said Reeves. "It was only later we found out how bad his health really was, that he had received the last rites of the Catholic Church three times when his family thought that he was dying."

White House photographer Pete Souza recalled, "One of the most famous pictures of President Kennedy was taken by a New York Times photographer named George Tames, and I think the title of the photograph is "The Loneliest Job.' And the reality of that picture is he's standing up and he's got his hands on the table, because of his bad back."

Souza is Chief White House Photographer for President Obama. The job has changed since the Kennedys, from controlled to nearly total, fly-on-the-wall access. Historical documentation, not much myth-making.

Teichner asked, "When you see those intimate photographs of the Kennedy children, knowing what you do, how does that strike you?"

Souza replied, "I think it does tell you a lot about him as a person. As a human being, not just in his role as president."

Teichner asked Reeves whether it was the intimate nature of the Kennedy family photographs that made Americans take JFK's his assassination so personally.

"Yes, I think that had a big effect," Reeves said. "We're old enough to know that the shock was just unbelievable. We couldn't believe this could happen to him, and to us.

"It was the end of innocence, the end of America seeing itself in a certain way, that everybody loves us, that they all want to be like us."

The pictures tell the story, a story, of this man and his family caught in the mind's eye of the world -- forever young in Camelot.