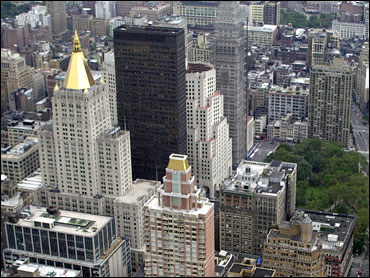 As the summer swelters on, skyscrapers and apartments around New York will be cranking up the air conditioning and pushing the city's power grid to the limit.

But some office towers and buildings have found a way to stay cool while keeping the air conditioning to a minimum — by using an energy-saving system that relies on blocks of ice to pump chilly air through buildings.

There are at least 3,000 ice-cooling systems worldwide, according to state officials.

The systems save companies money and reduce strain on electrical grids, a huge benefit for New York City, which on hot summer days consumes more power than the entire nation of Chile.

It also cuts down on pollution. An ice-cooling system in the Credit Suisse offices at the historic Metropolitan Life tower in Manhattan is as good for the environment as taking 223 cars off the streets or planting 1.9 million acres of trees to absorb the carbon dioxide caused by electrical usage for one year.

Such a reduction in pollution is especially valuable in a city where the majority of carbon emissions come from the operation of buildings.

"If you take the time to look, you can find innovative ways to be energy efficient, be environmental and sustainable," said William Beck, the head of critical engineering systems for Credit Suisse.

Because electricity is needed to make the ice, water is frozen in large silver tanks at night when power demands are low. The cool air emanating from the ice blocks is then piped throughout the building, more or less like traditional air conditioning. At night the water is frozen again and the cycle repeats.

Ice storage can be used as a building's sole cooling system, or it can be combined with traditional systems to help ease the power demands during peak hours. At Credit Suisse, for example, the company must cool 1.9 million square feet of office space at the Met Life tower, a historic building that was New York's tallest in the days before the Empire State Building.

In the basement, three main cooling rooms house chilling machines and 64 tanks that hold 800 gallons of water each. Credit Suisse has a traditional air conditioning system, but engineers use the more efficient system first.

The air-conditioning arm of American Standard, Trane also developed a system for Morgan Stanley's offices on Fifth Avenue and its facility in Westchester County.

A new Goldman Sachs headquarters also plans to install an ice cooling system. Credit Suisse is looking at installing the systems in offices around the globe, but nothing has been decided yet.

"The idea of not only saving money for large companies, but doing something that benefits the environment is win-win," said Todd Coulard of Trane's energy services department.

Engineers say the power-saving results from the system translate into millions of dollars saved in energy bills for the companies.

At the Morgan Stanley facility in Westchester County, the system reduces annual peak energy use by 740 kilowatts and overall electricity usage by 900,000 kilowatt hours.