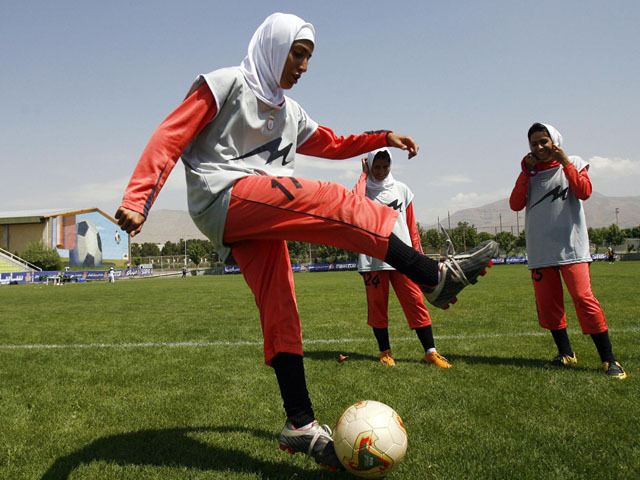 On Sunday, moments before Iran’s women’s team was due to take to the pitch and play in an Olympic qualifier against Jordan, the team was disqualified for wearing their traditional full-body tracksuits and hijabs. Jordan was granted a 3-0-forfeit victory, crushing the lauded Iranian team’s chances to go to the 2012 London Games.

As the Iranian players and officials tearfully objected, they were told that they had violated FIFA rules that state, "Players and officials shall not display political, religious, commercial or personal messages or slogans in any language or form on their playing or team kits." The team was also informed that since 2007 FIFA has held the view that wearing a hijab while playing “could cause choking injuries.”

There are two problems with this argument. The first is that it’s asinine. “Hijab soccer choking deaths” doesn’t exactly send the Google search engine a-humming. But far more problematic is that the team had already received assurances from FIFA that the uniforms were in compliance. They had even had played preliminary rounds without a blip from Blatter.

Iranian women’s soccer director Farideh Shojaei told Reuters TV in an interview, “We made the required corrections and played a match afterwards. We played the next round and were not prevented from doing so, and they didn’t find anything wrong. That meant that there are no obstacles in our path, and that we could participate in the Olympics.... This [uniform] is neither religious, nor political, nor will it lead to harm a player…. and Mr. Sepp Blatter accepted this."

So what is really going on here? First of all, we should dismiss any of FIFA's concerns about the welfare of the women involved. Blatter is an unreconstructed sexist and without resistance, women's soccer would look something like the Lingerie Football League. The man who bans the hijab proposed in 2004 that women players wear "hot pants" on the pitch to boost the sport's popularity. He said that the "tighter shorts" would produce "a more female aesthetic."  In addition, for years, human rights organizations have asked Blatter to take a stand and say something about the horrific influx of sex-slave trafficking that accompanies the arrival of the World Cup. Blatter’s cold response, "Prostitution and trafficking of women does not fall within the sphere of responsibility of an international sports federation but in that of the authorities and the lawmakers of any given country.” In other words, he’s not exactly Susan Faludi.

Conversely, by denying the team the opportunity to show their genius in full Muslim dress, Blatter becomes an agent of their oppression. As Alyssa Rosenberg wrote for Think Progress, “If we’re really concerned with how women are perceived and treated in Muslim communities, it seems hugely counterproductive to adopt policies that force women to choose between abiding by the tenets of their faith and participating in activities that let them demonstrate their physical prowess and strategic intelligence.” I would add that Blatter's decision only feeds the profound Western ignorance regarding the position of Iranian women since the 1979 Islamic revolution. The literacy rate for women before 1979 was 35 percent. Now it’s over 75 percent. In the days of the Shah, only one-third of women were enrolled in institutions of higher education. Now that number is 50 percent. One in three Iranian doctors are female. In the United States, that number is one in five.

The new presence of Henry Kissinger, pardon the expression, unveils what this kabuki theater is all about. Kissinger hasn’t been shy about his views on Iran, openly calling for war and saying, “We must work for regime change from the outside.” Given the way women’s rights has been used as a red herring to justify war on the Muslim world, this is about perpetuating the stereotype of the Muslim damsel in distress, denying those very women a powerful and visible presence on an international stage. This is about isolating Iran to continue the drumbeat of war. But most of all, at bottom, this is about Kissinger—and Blatter—using sports for their own political ends.

Those who bleat that “sports and politics” should be kept separate when an athlete dares express an opinion, should turn their outrage toward Blatter, Kissinger and FIFA’s decision to see soccer as a tool to sideline Muslim women. We should call upon FIFA to revoke the forfeits and adhere to the three words that should bind all leagues, all countries and all people who believe that sports can reflect the best of our species: let them play.

Bio: Dave Zirin is the sports editor for The Nation. The opinions expressed in this commentary are solely those of the author.