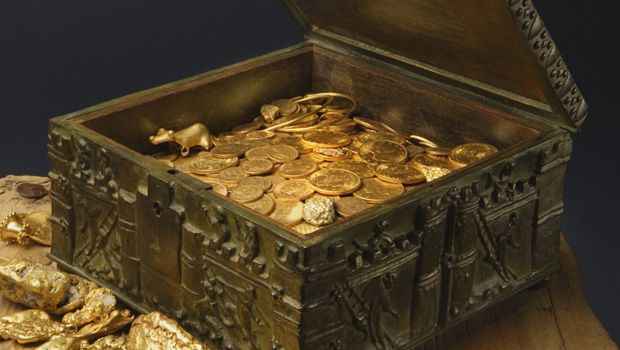 According to legend, the pirate Captain Kidd buried some of his treasure right on Long Island. But the search for hidden wealth stretches far and wide -- all to way out West. Our Cover Story is reported by Barry Petersen:

"Ever since I was a little kid," said Dal Neitzel, "I always wanted to go out and find treasure."

It is so much more than just a stroll in the Montana woods for Neitzel. "I read all those pirate magazines and comic books. And now I'm getting an opportunity to go out and look for one for real."

Like thousands of others in the Rocky Mountains this summer, he's here on a hunt for a treasure chest fit for a pirate -- filled with gold, precious metals, and ancient artifacts.

Its exact dollar value is not known. Some say a million, some say millions.

"I've been looking now for about five years," said Neitzel.

And is he getting discouraged by now? "No, there's nothing to get discouraged about!" he laughed.

This isn't some long-lost treasure. This is hidden treasure, placed somewhere in the Rockies by an eccentric millionaire five years ago. It's there for the taking if you can figure out the clues.

"I believe that his secret place is a place where there is some kind of running water," said Neitzel.

On this day the clues have taken him to a lake near Yellowstone National Park. The last clue is about a blaze -- maybe that's something on a rock -- and maybe Dal is just steps away from life-changing wealth.

Nietzel had a long career as a professional treasure hunter, salvaging sunken ships, but this is his toughest quest yet. This trip was his 64th attempt.

"There's no guarantee it's going to be found even in our lifetime," said Petersen.

Which no one knows better than the man who hid it: 84-year-old Forrest Fenn, who made a career out of collecting treasures of his own, such as the pipe of Sitting Bull, the Indian chief who bested George Custer and his men at Little Big Horn.

"He had several pipes," said Fenn. "But this is the one that evidently he liked the best because most of the pictures are him holding this pipe."

Fenn grew up in Texas and as a youth he explored the American West. He learned a lot about life's value as a fighter pilot in Vietnam, where he was shot down twice.

He eventually moved to Santa Fe and made his millions as a successful art and antique dealer.

The idea of a treasure hunt started after he survived a bout with cancer: "I said, 'I've had so much fun collecting all of these things. Why not let somebody else have the same opportunity that I've had?'"

He drove out across the Rockies and left the chest.

"There's 265 gold coins, eagles and American double eagles," he said of the chest's contents. "And there's hundreds and hundreds of gold nuggets. You're gonna be amazed at what you find.

"And when I walked back to my car, I talked to myself out loud -- there was nobody around anyplace - and I said, 'Forrest Fenn, did you really do that?' And I started laughing."

Fenn then wrote a poem with nine clues placing the treasure somewhere in the Rockies in one of four states -- Montana, Wyoming, Colorado, or New Mexico.

Petersen asked Fenn, "Do you wanna add anything to the hints?"

"The treasure is not hidden in a mine. A lotta these old mines are dangerous. I mean, they have snakes in 'em, they have black widow spiders!"

"Well, that's a good hint and a good piece of advice."

"Did I give you a hint? Really? You're not being fair to me, Barry!"

"Well, I don't think that narrows it down a lot, I gotta tell you."

Lust and loot, it turned out, launched a lot of lookers. Fenn says he stopping keeping track of emails at 65,000. Add to that countless more online with their own plans to find the treasure:

But, is it REALLY out there?

"The only way that I could prove to you that the treasure is hidden is to take you there," Fenn said. And he won't. "There's an old saying: 'Two people can keep a secret if one of them is dead.' So if I take you out there, I wouldn't wanna be your insurance agent!" he laughed.

To avoid that deadly fate, we opted to just ask someone who knows a lot about secrets: his friend, Valerie Plame. A former CIA agent, her cover was compromised in 2003 by a White House official. Scandal ensued, and Plame and her husband eventually moved to Santa Fe, where she met Fenn.

She says Fenn hasn't told anybody his secret. "Apparently not even his wife," she laughed. "That is something!"

"Do you believe him?" asked Petersen. "Do you think that treasure's out there?"

"Oh, absolutely," said Plame. "I think that this is something that Forrest has done to completely amuse himself."

Writer Michael McGarrity agrees. He's another longtime friend, and is one of many people we spoke with who saw the treasure before Fenn hid it.

"Forrest, whether he admits it or not, loves attention, but he denies it," McGarrity said.

Plame agreed: "He has this 'Aw, shucks' personality, but he's as sharp as can be."

"No, no," said McGarrity. "So, his ego is involved. Who he is and where he comes from is involved. His whole life has been one big adventure after another."

Adventures that he loved, and hiding the treasure was a way to pass that love on.

Petersen asked, "In your mind, who would be the best person or family to find this treasure?"

"A family that is joined together and gone out lookin' for the treasure four or five or ten or 50 times," he replied. "Take a tent and sleeping bags and your fishing pole and go out looking. That was my primary motive."

And that is exactly the motive driving the Dunstan family of city slickers slip-sliding through the southern Colorado backwoods.

"This is crazy," said one teenager, peering into a gorge. "This is terrifying!"

Last month they left their home in Orange County, California, on their own search for Fenn's treasure.

What was the lure? "The adventure of it," said Marlene Dunstan. "The fun of it. The riddles, solving puzzles."

Marlene and Mark, along with Ashley and Amber, Audrey and Aislyn are far from their comfort zones.

"If only you could see the expressions on their faces," laughed Petersen.

"Yeah, well, you know, they're teenagers," she said.

The Dunstan family trip ended with photos and memories, but alas, no treasure.

As for the man who launched a thousand dreams, on a hunt yet to end, Forrest Fenn has no regrets for what is out there, somewhere, for any of us to find.

"I would do it again in an instant," Fenn said.