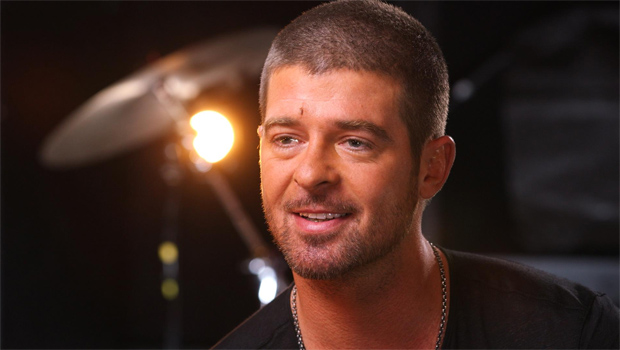 Robin Thicke bares his soul in his new album titled "Paula" . . . as in Paula Patton, the wife who left him, and whom he's now publicly trying to win back with his new album's every song. It's a provocative approach, to say the least, which he recently defended to our Anthony Mason:

"I had hit songs on R&B and soul radio, but that was my first pop hit," he said.

"Did it feel different?" Mason asked.

It made the 37-year-old soul singer an international star. But the success that previously had eluded him seemed to overwhelm him. His life blew up -- and his marriage fell apart: "It's been a very humbling year, to say the least."

Thicke's response has been to rush out a new record, an album he's named for his estranged wife, Paula Patton. It's a 14-song apology in which he begs her to come back.

Mason asked, "Did you have any hesitation about effectively doing it in public?"

"Some people are going to say that you're, in effect, exploiting the situation, to sell records."

"And what do you say to that."

"My music is my life. I have no choice but to connect the two."

But this week, as he promoted the record on radio, TV and the Internet, Thicke faced a tsunami of social media outrage and condemnation.

"I'm sure you were aware to some degree that you were making yourself an easy target," said Mason.

"Yeah. Yeah. But I should be. I don't know what her album would be if she made one about me. I'm sure it would go much differently right now."

"Would you want to hear that album?"

Robin Thicke grew up in a Hollywood family. The son of singer and soap opera star Gloria Loring and actor Alan Thicke, who starred in the TV series "Growing Pains," Robin taught himself piano when he was 11 years old. He was only 14 when you got a deal. "Yes, when I was 14 Brian McKnight heard my demo tape and said, "That's a white kid singing?'"

By 16 he was signed to Interscope Records, and soon writing songs for other artists like Usher and Christina Aguilera. But when he put out his first solo album in 2002, it bombed.

"I was devastated," he said. "That's why my second album, 'The Evolution of Robin Thicke,' was really all about trying to believe in myself and find some spirituality and self-love without the accolades and the record sales."

That record produced his first hit song, "Lost Without U." The video for it featured his then-new wife, Paula Patton.

They go way back: they'd met at age 14, at a teenage nightclub, "where there's no alcohol but you can dance in the summertime," said Thicke.

"What was the connection?" Mason asked.

"She was just a very creative, loving, spiritual, intelligent woman."

The couple, who married in 2005, have a four-year-old son. Thicke and Patton, an actress who starred in "Mission Impossible: Ghost Protocol," were used to public scrutiny, but nothing like the attention the success of "Blurred Lines" would bring.

The video for "Blurred Lines" has more than 300 million views on YouTube. But the uncensored version, which features naked models, was branded by some as sexist, even misogynistic.

Then there was Thicke's notorious performance of the song with Miley Cyrus on the MTV Video Music Awards last summer. One the most tweeted-about events ever, it put the term "twerking" in the dictionary.

According to someone on the floor crew, Mason said, "the rehearsal was considerably more toned down" than what aired.

"That is true," said Thicke.

"So was the extent of Miley's performance a surprise to you?"

"No, we all knew we were going to go out there to have some fun. And I've never seen the performance, so --"

"I just have no reason to."

"Are you afraid there's something in there you're not going to like?"

"I don't know. Actually, you know, some things are better left, you know, in the past."

What he hasn't been able to put in the past was a backstage snapshot that caught him groping another woman. Thicke refuses to discuss what happened with his wife.

"Those things are private and personal," he said.

"What am I going to find there? I mean, in your words?"

"Well, they're the first 14 songs that I wrote. I wrote them in a few weeks, so they poured out of me, and I just had to write about it."

He has supervised the project closely, even directing one of the music videos.

In Los Angeles last month, he was rehearsing the songs with his band for the first time.

Because? "I didn't know what else to do with my day, you know? It was all these things in my heart and soul that I just had to get out."

Mason asked, "Did you tell her you were going to do a whole album about her?"

"Well, I kind of surprised her," Thicke said. "She was filming a movie in Vancouver and she came back to L.A. for a couple of days, and so I played her a few songs."

"I'm going at you because you put out an album with her name on it," said Mason.

"Right. Right. You have to. Hey, I've opened this door.

"Where I'm at right now is, I just want to, you know, be a good dad, be a good friend to her and support my family."

"But without trying to be overly dramatic about it, when you looked in the mirror, in all of this, what did you see?"

"I saw a guy who needed to be humbled a little bit," Thicke said. "Because I think you strive for so long for an accomplishment like what happened last year, and then you get it, and then you don't know how to juggle it, you know? And all of a sudden the balls are all over the floor."

"At what point do you recognize that?"

The video for the album's first single, "Get Her Back," features a woman who looks strikingly like Paula Patton. Captions appear, what you imagine are text messages between Robin Thicke and his wife.

"No, because she's a great friend and she's a great mother. And I still consider myself a very lucky man for every day that her and I did have together."

After a long week of public confession, Robin Thicke seems resigned to being judged:

"She didn't leave for no reason, you know?" he said.

"And you don't care what people call you through all of this?"

"Hey, it won't be worse than what I've called myself."