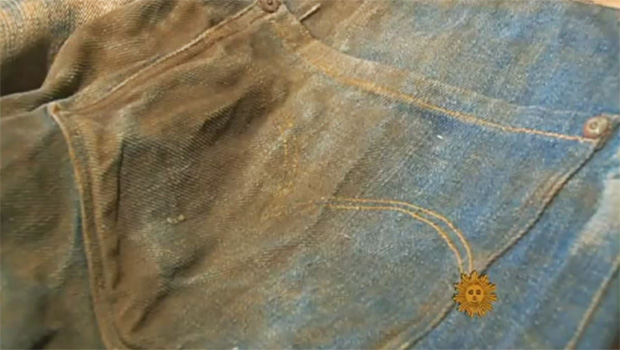 Good jeans come in many styles and colors these days . . . with quite a range of price tags, too. But the most expensive jeans we've ever seen are the ones Serena Altschul has managed to dig up -- with a little help:

This story was originally broadcast on May 6, 2012.

In the intricately woven world of denim, Michael Allen Harris, a commercial painter from Orange County, Calif., is sort of a celebrity.

On weekends, Harris hunts old mines in search of blue gold -- old jeans, really old jeans. The jeans of the old West--dirty, dusty, tattered jeans that can appraise for up to a hundred thousand dollars.

Harris (left) showed Altschul a pair dating from 1873-74, "when the rivets on the top right here are unstamped. They're stamped only on the back.

"You can`t research this stuff on the web. Nobody knows anything about it. So it's a like a mystery. You know, it's like being a detective, a denim detective."

Harris also found one of the oldest denim jackets known to exist, which Lynn Downey, the historian emeritus at Levi Strauss, showed Altschul.

"This has its previous life permanently imprinted on it," Downey said. "Our designers are the biggest users of the historical collections here. There's such understanding, there's such respect and such love for this."

Downey says these antique jeans are prized by designers because of their wear patterns. Today, those patterns are recreated by jean designers like Loren Cronk for that all-important lived-in look.

"If you look at the way an old pair of jeans has been worn away or torn, it's sometimes easy to surmise what kind of early life it had," said Downey (left). "If there are really significant wrinkles on the back of the knee, for example, you can tell that the person either spent a lot of time on a horse or did some sort of job where he was bending his knees a lot."

Cowboys wore denim; so did bikers, like the one Marlon Brando played in "The Wild One" . . . as did the demonstrators that brought down the Berlin Wall.

No other garment personifies freedom more than denim blue jeans.

But jeans were originally workwear. They were the essential clothing of a hard day in the mines when Jacob Davis and Levi Strauss patented the idea to use a metal rivet to hold denim together.

And those jeans were made in America, like the rigid fabric from which they were cut -- that is, until the 1990s, when companies like Levi's began to shut down most of their American manufacturing.

So you might say they don't make jeans like that anymore -- until you meet Roy Slaper. "I like the idea of a whole factory of old machines, that I'm the mechanic and I'm the head designer," he said.

He is, in fact, a one-man sweat shop. Slaper uses 14 different machines to make a single pair of jeans. He designs and makes each garment out of a one-room workshop in Oakland, Calif.

"It doesn't feel like this wispy little piece or something," he said. "This is like a big deal for me, because this is my denim."

Slaper even designed the jeans' denim, and had it custom-made at one of the world's oldest continuously operating denim mills, Cone Denim's White Oak Mill in Greensboro, N.C. The fabric is woven on looms more than 50 years old, using a process that hasn't changed in hundreds of years.

His jeans are not only made the old-fashioned way; in fact, they're designed to actually look better as they age, right down to the buttons.

"When they wear out, they get kind of coppery-brassy color," he said. "Basically, everything on the jean is made so that as it wears, it looks more beautiful than when it's new."

The cost for all this scrupulous attention to detail? A tidy $340. In the venerable world of jeans, what's old is new again, except it's a little more expensive . . .

. . . Like jeans designed by Matt and Carrie Edmunson in Nashville, Tenn. Their company is named after their grandparents, Imogene and Willie.

Of course, jeans like these require special care. "We encourage, mainly due to small amount of shrinkage, to not wash your jeans for six months," said Matt.

Believe it or not, others are even more particular about the care of their jeans.

"I think the extreme is to never wash your jeans," said Matt. "This sort of comes from the school that, as miners and people wore their jeans, the indigo left the fabric and caused these amazing wear patterns just sort of evolved into the jean."

Michael Allen Harris showed a pair in which the creases were so strong they actually broke through. "Who knows if this was ever washed?" he said.

These jeans may be torn, but woven in them is an American history of work and play.