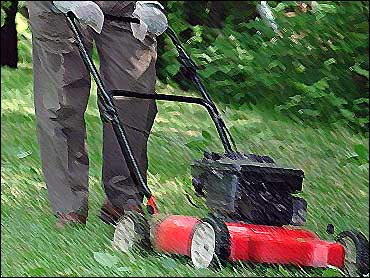 Like lemonade and long walks, mowing the lawn is an essential part of summer, just a little louder.

In America, more land is devoted to growing turf grass than any other plant. NASA has even mapped America's lawns from space. But you might be surprised to learn that neither the lawn nor the lawnmower are American at all - they come to us from Britain.

"Edwin Budding invented the lawnmower in 1830," Ted Steinberg, a history professor at Case Western Reserve University in Cleveland, told Sunday Morning correspondent Serena Altschul. "He got the idea for the lawnmower from a carpet cutter."

"Americans did inherit the lawn from their British ancestors, as it were, the British aristocracy," he said. "Washington and Jefferson, for example had lawns, attempting to imitate their counterparts in Britain."

Steinberg says the lawnmower created what you might call a grassroots revolution in America.

"First of all, the lawnmower provided the conditions for lawn democracy," he said. "A society where just about everyone could afford to purchase a machine to cut the grass."

Steinberg says that today's mowers are actually not much different than Budding's 19th century design.

"In fact, it is the same design," he said. "And like many mechanical inventions, if the person gets it right the first go-around, it's just a matter of tinkering around the edges in improvement."

Jim Ricci should know. He has 600 antique mowers in his garage. He says America was fertile ground for Budding's grass-cutting contraption. In fact, it was immediately copied. Within a few decades, an army of mower companies were competing to cut the country's home turf. Ricci said there were hundreds of thousands of companies vying for a top spot in the mower market.

Lawnmower sales really increased when families began to move to the suburbs after World War II.

Mower sales grew as quickly as builders could plant grass in suburban lots.

"Taking care of the lawn was kind of a rite of passage," Steinberg said. "A chore that was often pawned off onto the boy in the family. And this was a way of demonstrating a kind of insipient manhood."

Case in point: "Leave it to Beaver." Wally mowed to earn money but Beaver was too young to handle the mighty mower.

Mower brands like Lawn Boy became icons of suburban life - as neighbors competed to out-mow each other. Today, a new crop of mowers has ridden to the homeowner's rescue: the Zero-Turn Radius mower.

"What the ZTR, zero turn radius unit did was to replace the front wheels with casters," Steinberg said. "And now you had a machine with levers that allowed the operator to turn on a dime. To turn 360 degrees by just using the levers, much like an Olympic swimmer reaching the end of a swimming pool."

And then there are the folks who see mowing as anything but a spectator sport. Welcome to the world of lawnmower racing, where you don't mow grass - you mow down the competition. The fastest man on a mower is Bob Cleveland. His lawn mower has taken him places where even grass won't grow. Last summer, he set a lawn mower speed record at the Bonneville Salt Flats in Utah - over 80 miles an hour.

"And man, that was a dream come true," Cleveland said. "You know it's just a different world out in Bonneville. It was just an amazing trip to able to do that on a stinking lawnmower."

Still, for grass that really is greener, lawn care purists insist the old push mower remains the state of the art. And for those of us who really believe beautifully trimmed grass is a work of art, meet David Parfitt, an artist of a different stripe.

"Actually making stripes in the grass is really simple," Parfitt said. "You just push one way and it makes it dark, and another way it makes a light band. It gets tricky when you start trying to want a particular design. And in the case of this design, the thing that was the most challenging was the geometry of it."

In his new book "Lawnscapes: Mowing Patterns to Make Your Yard a Work of Art," Parfitt gives the concept of lawn art an altogether new meaning. In his hands the mower really has found its place in the sun.