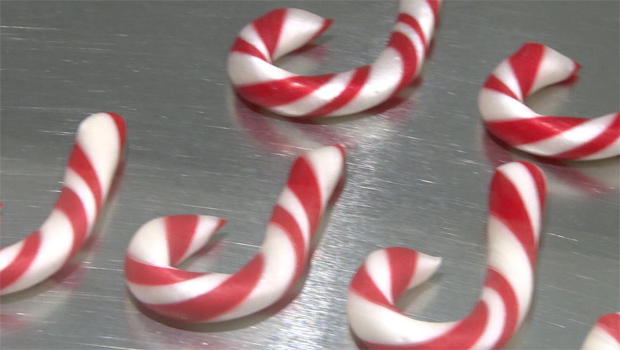 Nothing says Christmas like a fresh crop of candy canes.

So how did a peppermint stick with a hook come to be a symbol of the season? The tale, it seems, has as many twists as those tasty stripes -- and, as it turns out, most are the stuff of legend.

One popular story says a choirmaster in 17th century Germany gave candy sticks to QUIET noisy children during Christmas services. He fashioned a hook on one end to symbolize a shepherd's staff -- acknowledging all who watched over their flocks that night.

Here in the United States, a candy maker in Indiana is said to have bent one end of the sugar stick to form a "J" for "Jesus"; and a man named August Imgard has been hailed as the first to decorate his holiday tree with candy canes.

One thing we do know is that the mass production of candy canes is inherently American. It was candy man Bob McCormack who cornered the market in the 1920s by turning out handmade candy canes by the thousands at his factory in Albany, Georgia.

But with at least a 20-percent breakage rate, candy cane-making proved to be sticky business.

That's when Bob McCormack's brother-in-law, Gregory Harding Keller, a Catholic priest, stepped in, with an invention that came to be known as the Keller Machine.

Automation increased production from thousands to millions per day.

Keller's invention was such a hit, he even appeared on the TV show, "What's My Line?"

The Keller machine may not enlighten us on the actual origins of the holiday treat, but it has ensured that the candy cane, along with its signature hook, would delight children and grownups for generations to come.