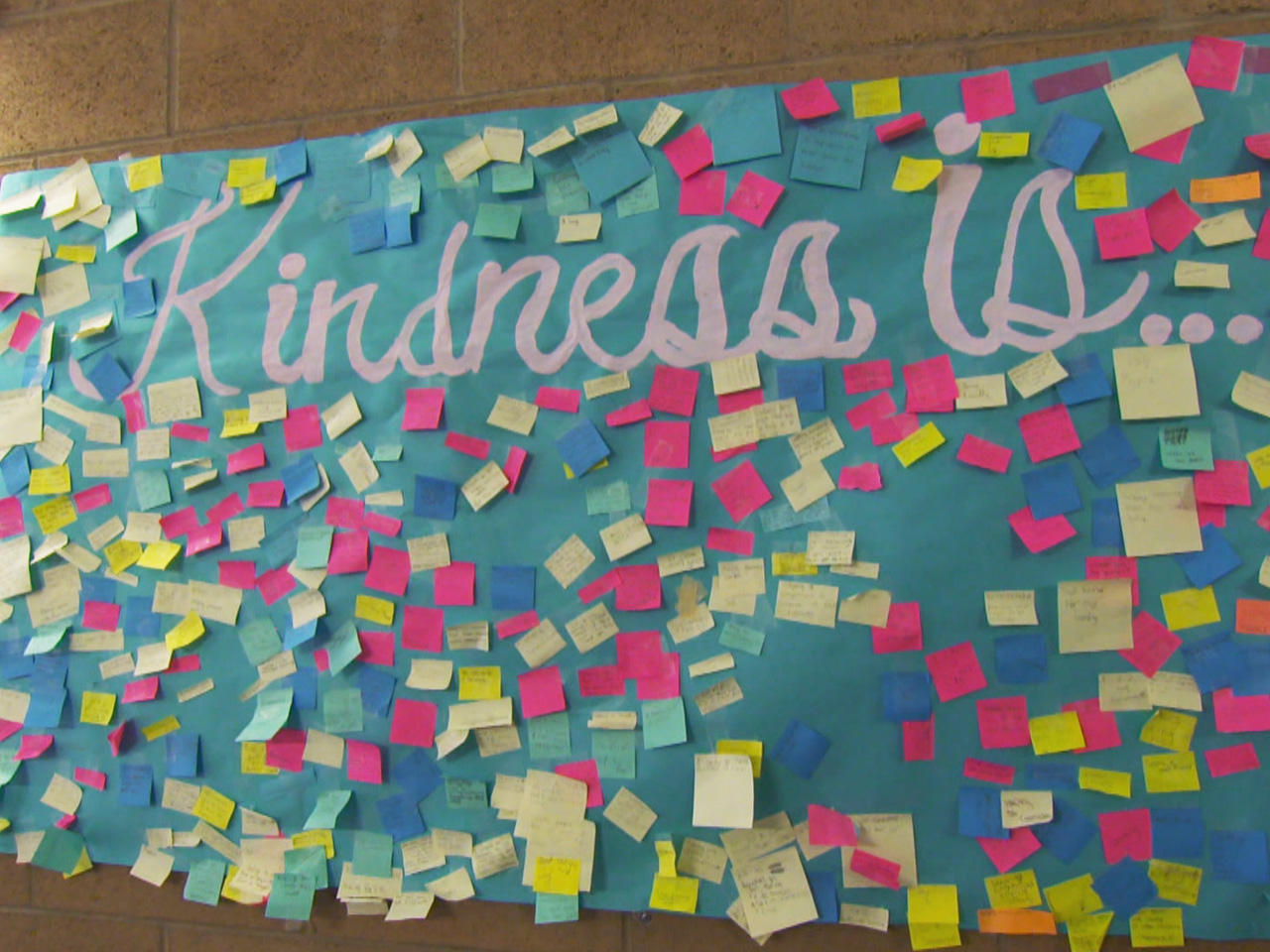 In this season of Christmas, a question... When was the last time you thought about the power of KINDNESS? Our Cover Story is reported by Lee Cowan:

The wonderful thing about "It's a Wonderful Life" is those final few minutes, when George Bailey -- after a lifetime of dolling out kindness -- finally gets it all back in full measure.

Sure, it's a Hollywood ending -- kindness rarely parades into your living room, after all -- but it can appear in places you don't expect.

For Traci Bild, it was the parking lot of a Dairy Queen some 30 years ago tonight.

"My mom loves Christmas, we were very much about Christmas, but we just didn't have any money for a Christmas tree. That was just the reality," she told Cowan.

Yes, on that Christmas Eve in Urbana, Ohio, there was no tree, no presents, no money … except for the few coins she and her brother scrounged out of the couch cushions.

"It wasn't much," Bild laughed. "I mean, it was literally quarters and dimes. Probably under a dollar!"

They took their meager offering to the only tree lot in town, at that Dairy Queen, run by a round-faced man nicknamed "Jug."

Jug had been a Marine and an Ohio State Trooper, and although stern-faced in old photos, on that night Jug seemed to Bild as soft as new-fallen snow. "You know, the thought of my children, walking a couple of miles in hopes of finding on Christmas Eve a Christmas tree to take home to their mom, I can imagine that must have touched his heart," she said.

Touched, indeed; Jug not only gave them a tree, he gave them his biggest and best, no questions asked.

"It was about the magic of Christmas, of human kindness, and somebody doing something for us that we did not expect someone to do," Bild said.

Not expecting it is what makes kindness so special. And yet, as unexpected as it is, we still crave kindness, which may very well be because research shows being kind is a natural part of the human condition.

"We're genetically wired to be kind," said David Hamilton, a former organic chemist from Scotland. "It's actually our deepest identity.

Hamilton has made a career lecturing and writing about how kindness isn't just something we do, or something we feel. It's something our bodies actually need.

"Being kind, because it makes you feel warm and connected, it actually changes the internal biochemistry of your body," he said. "There's a physical effect, yeah. It's the opposite of stress."

There is a hormone that is produced every time we do something kind. It's called oxytocin -- what he likes to call the "kindness hormone."

"One of the things that it does, it softens the wall of the arteries," Hamilton said. "It's funny; it's like a mirror. As you become softer towards people, so you soften on the inside. It actually softens the walls of the arteries. And when that happens, the heart doesn't have to push as hard to get the blood through, so blood pressure drops."

And, he says, you can get that healthy effect by doing nothing more than offering a smile.

Cowan asked, "So, it doesn't have to be some grand gesture, right?"

"No, it's the consistency of doing small things that matter more than doing one grand gesture."

Elizabeth Higgins Clark and her fiancée, Lauren Pomerantz, found that out when they set out to do one small act of kindness every day for an entire year.

What was the reaction? "A lot of our friends made fun of us," said Pomerantz, laughing.

Hoping to inspire others, they posted their efforts on social media under the hashtag #KeepAmericaKind. They filled expired parking meters with coins; they sent pizzas to sheriff's departments; and baked cookies for strangers. They baked for construction workers, crossing guards, UPS drivers -- "Anyone who we could think of who we thought would need a cookie," said Clark.

When they ran out of their own ideas, they'd seek out nonprofits, like Big Sunday, where they could go and volunteer. On the day Cowan visited, they were making care packages for the homeless.

What Clark and Pomerantz found after 365 days of doing small acts like this is that kindness was like a muscle. If it went un-used, it would atrophy … and the urge to be kind would go away.

"Yeah, it is. The more you do it, the more comfortable you are, the better you are at it," Pomerantz said.

Which would seem to suggest the earlier you start being kind, the better.

Brian Williams is the founder of Think Kindness, a program he developed specifically for schools to teach kids that no kind act is too small. "My job is to figure out a way to go into a school and make kindness cool," Williams said.

"It's super important that we start kids early, to train them to say, look, every single day you have an opportunity to make a difference in the world, but it's up to you as to whether you'll take action."

At Mount Rose Elementary in Reno, Nevada, Williams was recruiting what he calls Kindness Ninjas who do good deeds like writing a teacher "You are awesome -- keep it up," and then delivering that kind message without anyone ever noticing.

"When we see those acts of kindness, it reinforces that belief, like, our world is good, our world is awesome, people are awesome, and we can all band together and make a difference," said Williams.

He works with older students, too, like the ones at nearby B.D. Billinghurst Middle School, where messages of kindness and respect are everywhere you turn.

There's a whole "kindness crew" who makes them. They also organize school-wide kindness campaigns that, students say, have changed their school's culture.

"Kids have not been bullying people and they haven't been saying mean comments and stuff," said Sam, a "Kindness Crew" student.

"It's not something that's you're just going to go into classrooms one month and then it's going to be like, oh, the whole school's kind; it's going to have to take convincing for those kids who don't want to do it,' said another "kindness crew" member, Zoey.

Nobody needs to convince Traci Bild about the lasting power of kindness. Almost any Christmas tree reminds her of Jug (whose real name, by the way, was Gerald Woodruff). She still comes to visit him, even though he's long gone now.

She kept in touch with Jug's kids, too. Imagine all the Christmases that have come and gone, and yet here they were, decades later, talking about an act of kindness their dad had done that still resonates.

"It amazes you, what one small act of kindness, how it grows," said Jug's daughter. "I mean, you never know. I mean, he never did stuff for a thank-you, he just saw a need, and he loved people, and just went right in and helped, yeah."

Which gets us back to George Bailey. That Hollywood ending did prove one thing: Kindness begets kindness. It's contagious, in all the right ways.

Traci Bild said, "I think we think about doing kind things a lot, but then think, Ah, I'm not gonna, I don't need to do that, That's stupid, or Why would I do that? I think we just need to do it. Stop thinking about things and just do it!"

Charles III: What changes might we see from Britain's new king?