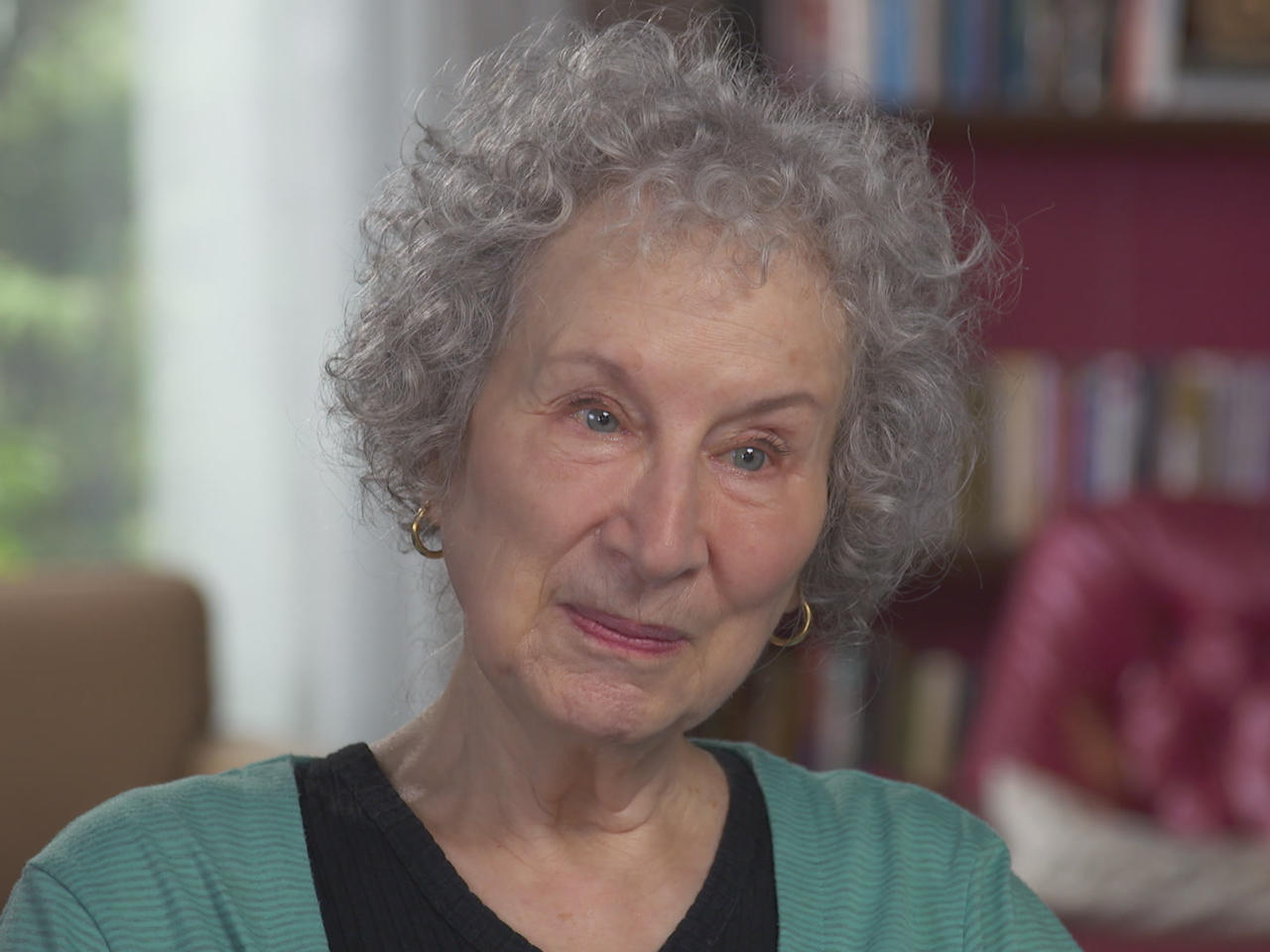 Even if you'd never heard of "The Handmaid's Tale," its Emmy win for Best Drama was obviously a big deal. It picked up eight Emmys for Hulu in 2017.

And when Margaret Atwood, the author of the 1985 book that inspired the TV show, made her way to the stage wearing "handmaid" red, the applause – a standing ovation – spoke volumes.

In Atwood's novel, handmaids are essentially sex slaves, forced to bear children for infertile couples among the power elite in Gilead, the totalitarian dystopia the United States had become after being taken over by Christian zealots.

Correspondent Martha Teichner went with Atwood to the Toronto church gym where the scene was shot. The take was filmed multiple times. "Me slapping Elisabeth, they had to keep shooting it, because I wasn't doing it vigorously enough!" Atwood laughed.

"So, that, and the Old Dutch Cleanser package from the 1940s," she added. "A vision from my childhood."

Outside the church, Atwood is recognized by teenagers attending day camp. At 79, she is Canada's most famous living writer. She's published 60 books, but "The Handmaid's Tale" has overshadowed the others. In English, it's sold more than eight million copies.

She began the book in West Berlin in 1984: "A symbolic year because of Orwell, and how could I be so corny as to have begun 'The Handmaid's Tale' in that year?  I couldn't help it!"

"What made you want to write it?" asked Teichner.

"So, there I am in West Berlin surrounded by the wall, and I'm visiting various totalitarian regimes in East Germany and Czechoslovakia and Poland. So, for instance, Ceaușescu in Romania made a law that women had to have four babies, and they had to have a pregnancy test every month. And if they weren't pregnant, why not?"

In the book, and the television show, every atrocity, no matter how awful, had to have happened somewhere in real life. Atwood said, "It's not me who made this stuff up; the human race made it up, unfortunately."

"And did you fully intend 'The Handmaid's Tale' to be a warning?"

"What does it matter what I fully intended or not? It is a warning."

"So, you felt the need to create this warning?"

Beginning in 2017, women all over the world began taking to the streets dressed as Handmaids, in the belief that fiction was indeed becoming fact, especially the restrictions of women's rights. Today, when you see the costume, you know what it means. It's leaped out of Atwood's book into our politics.

Atwood said, "I don't really expect things. I make educated guesses about possibilities. But I'm not a prophet. If I were any good at gambling, I would do that. Be a lot richer!"

For more than 30 years, she's spent her summers on Pelee Island in Lake Erie. The southernmost point in Canada, it is an important sanctuary for migratory birds, and she helps to pay for conservation efforts on the island.

Atwood actually lived in the woods as a child with her family. Her father was an entomologist. "He was studying infestations, things that cause large numbers of trees to die," she said. "We were way up in northern Quebec. And then we were way up north of Lake Superior."

Teichner asked, "When did you decide you needed to be a writer?"

Atwood said, "I decided that I was a writer. It sounds like a strange thing to say, but I decided I was one when I was 16.:

She's done a lot of writing on Pelee Island. Why is it such a good place to write?  "Nobody calls!" she replied.

She wrote some of her latest book, a sequel to "The Handmaid's Tale," on the island. "The Testaments" will be published on Tuesday, with an initial print run of half a million copies.

The book's launch, in London, will be streamed to over 1,300 cinemas around the world.

And can Atwood give us any hints? "We know from book one that Gilead ends," she said. "But we don't know how. But we're a little closer to knowing how."

"Is there hope in the second book?" Teichner asked.

When Teichner asked, "In this whole process and the explosion of 'The Handmaid's Tale' and its ripples in culture, what are you most proud of?" Atwood replied, "I'm Canadian, Martha. We don't do proud of!"

What do you do?  "Less embarrassed by!" she laughed.

READ AN EXCERPT: "The Testaments" by Margaret Atwood

Book excerpt: "How to Raise an Antiracist" by Ibram X. Kendi