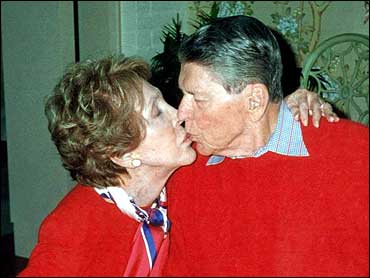 Ronald Reagan, who has been in seclusion since disclosing in 1994 that he had Alzheimer's disease, celebrated his 92nd birthday Thursday at his Bel-Air home with wife Nancy.

Joanne Drake, the former president's chief of staff, said a low-key affair was planned. She said chocolates — Reagan's favorite, would play a part in his day.

"He's comfortable and doing as well as anyone could expect for a man of 92," Drake said. "He's going to be around a long, long time."

At the Ronald Reagan Presidential Library in Simi Valley, 50 miles away, visitors celebrated America's longest-living former president with birthday cake and were encouraged to sign a giant card. Jelly beans, a Reagan staple, were also handed out.

Three weeks ago during an event featuring the appearance of five former first ladies, Mrs. Reagan would say only that her husband was doing OK. In a CBS 60 Minutes II interview last year, she said she's not sure her husband recognizes her.

The nation's 40th chief executive, who has recovered from a broken hip suffered in a fall at his home in 2001, has rarely been seen in public since his poignant letter announcing he had the memory-sapping disease.

Reagan's admirers, meanwhile, continue to shower him with tributes.

In Connecticut, it was Ronald Reagan Day. Republican Gov. John G. Rowland's proclamation was a tribute to the man who "inherited a disillusioned nation shackled by rampant inflation and high unemployment" when he took office in 1981 and helped restore "accountability and common sense to government."

In Tallahassee, Fla., the birthday was noted during an Alzheimer's summit featuring a keynote address by Dennis Revell, an Alzheimer's Association national board member who was married to the late Maureen Reagan.

"He's under the incredible care of Nancy, his nurses, his doctors. He's doing well for a man of 92," Revell said.

In Illinois, the Gipper's birthday is a state holiday. Reagan was born in Tampico and spent his childhood in Dixon. The Dixon home is a federal historic site.

A group in Eureka, Ill., is making plans to commemorate Reagan's movie career. The first Ronald Reagan Film Festival and Movie Memorabilia Show
is scheduled for May 2004 at Reagan's alma mater, Eureka College.

Organizers say the three-day event will include eight or nine of the former president's movies, memorabilia from Hollywood's golden era, lectures, tours and a "picnic atmosphere."

On May 10, the USS Ronald Reagan will be commissioned in Norfolk, Virginia.