Is the American working family being squeezed? The Obama Administration seems to think so. According to The New York Times, the White House is planning to use federal contracts to try to leverage higher wages and benefits for workers. Of course, just how squeezed the average paycheck appears depends a lot on where you sit . . . and where you work. Our Cover Story is reported by Jim Axelrod:

Only for these parents in Cary, North Carolina, there's no need to rush. Their child-care center is at work.

"Extremely convenient," said Brian Bennett. "You wake up in the morning, spend time with the kids, drop them off and you're in your office in two minutes."

Subsidized, on-site daycare is just one of the salary-enhancing benefits for employees at SAS - a business software company - and one of the many reasons Fortune magazine honored SAS as the Best American Company to Work For in 2009

"I have several neighbors that send their children to other sites, and they're paying three or four times what we pay here," said Bennett.

"I can walk from my building and visit my child whenever I want to, and if she needs to go to the doctor I can take her to the healthcare," said Mary Deaton.

That's right: SAS also has an on-site medical center, with 4 doctors and 12 nurse practitioners. No appointment necessary, and visits are free.

That's not to be confused with the top-of-the-line health insurance SAS offers, picking up 90% of the premium.

And that's just the beginning of an envy-inducing list of perks SAS offers all its workers, from CEO to cafeteria worker:

But while an on-campus masseuse is great, Jenn Mann, who heads human resources at SAS, knows where a compensation package starts: cash.

"We have a profit sharing program that has ranged anywhere from five to 15 percent of an employee's annual pay based on the company profitability," Mann said. "But we also have a discretionary reward bonus for performance. And so depending on how well the company does, our employees can see a discretionary bonus on top of the profit sharing as well."

Oh, and did I mention the swimming pool?

The reality is, for more and more Americans in these recessionary times, SAS might as well be Disney World. The fact is, most workers feel overworked, under-appreciated and - most of all - under-paid.

"We're living through one of the worst times for wage growth ever," said Larry Mishel, an economist with the Economic Policy Institute, a non-partisan, non-profit Washington think tank. "From 2002 to 2007, the hourly compensation of a typical college graduate or a typical high school graduate went up zero - didn't grow at all."

Mishel says for most American workers, wages have been under assault for nearly 40 years.

"If you're in manufacturing, there's pressure from overseas," he said. "We've weakened the ability to have and keep a union, we've introduced privatization, we have a much lower minimum wage, in many industries, we've deregulated them."

And the current recession isn't helping.

"We've seen the steepest and longest rise in unemployment since the Great Depression," Mishel said. "This has a tremendous downward pressure on wages. Employers have all the leverage; they don't have to give you more money to get you accept a job.

"In a Great Recession, you don't have songs that say, 'Take this job and shove it!'" Mishel said.

He points to the fact that from the 1940s until around 1970, as workers became more productive, their salaries grew accordingly. But around 1970, things changed, and for the next four decades, as productivity skyrocketed 70%, hourly wages hardly budged, rising a mere four percent.

So, where did all that extra money go? Mishel points to the very top.

"Hang on, hang on - over 18 years, a third of all income growth went to one tenth of one percent?" Axelrod asked. 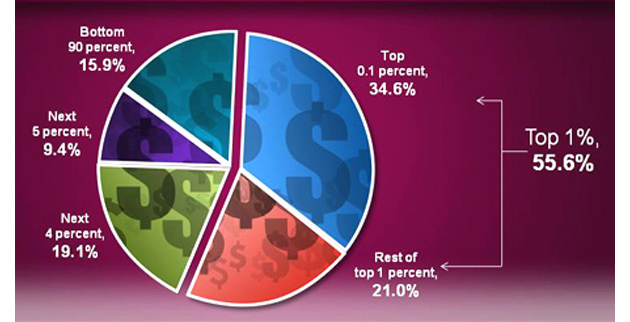 (Economic Policy Institute)
In other words, the middle class was getting a raw deal.

"Now the fact is, you don't have to pay someone that much to get out of bed and go to work and be productive."

"I call this the 'gloom and doomers,'" said Georgetown University economist Stephen Rose, who thinks the myth of a middle class squeeze is exactly that, a myth.

"That would imply an economy that we just don't have. The malls wouldn't be filled. The people wouldn't be rushing to spend $14 to go to 'Avatar.' They wouldn't have all the wiis, all of the iPods, the iPhones, etcetera, etcetera."

"It's really a low threshold to say families are a little better off than 30 years ago, when the pie grew by 70%," Mishel said. "They should be far better off."

Which brings us back to SAS, and what co-founder and CEO Jim Goodnight is trying to do: redefine the concept of "fair wage."

"You know, I always use the phrase, '95 percent of my assets drive out the front gate every night, and it's my job to bring 'em back,'" he said.

"Listen, I work hard, we all work hard," said Jonathan Hairr. "Because of these benefits that we're given, I think we're inspired and motivated to even work harder and give more to the company."

It's not just the right thing to do. In Goodnight's view it's the smart thing to do, at least for anyone wanting to grow a business.

Goodnight has kept that in mind, which explains why hardly anyone ever leaves SAS. Ninety-six percent of employees stay on year to year, in an industry where turn-over averages 22%.

SAS accountant Mary Deaton says she is definitely not overworked and underpaid. "It's just not a company where you're sitting here wishing you could be someplace else," she laughed.

And if you're sitting there wishing you worked for SAS, there's hope. Even in this down economy, the company is looking to hire 200 people.