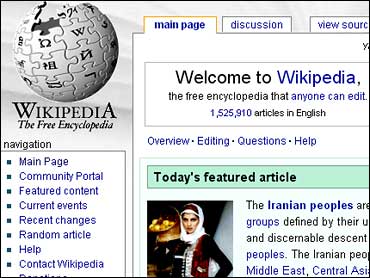 From shifting definitions of Pluto, to timeless Byzantine mosaics, from Ansel Adams photographs to music by Mozart — when you look something up on the Internet these days, chances are you'll be exploring it on Wikipedia.

The Internet encyclopedia has grown explosively since its creation five years ago, with visitors doubling every four months. Its 5 million entries in 200 languages have been written entirely by volunteers.

It's open because most anybody can log on, contribute to, or change a Wikipedia entry. Recently some of these anonymous volunteers gathered to meet face-to-face and celebrate their information revolution.

"We're a bunch of geeks," Jimmy Wales, the inventor of Wikipedia, told Sunday Morning correspondent Serena Altschul. "I mean, writing an encyclopedia as a hobby is obviously a fairly geeky thing to do. The real core thing that people believe in is free knowledge. So people can copy or modify it, redistribute it."

Wikipedia began when Wales failed in an attempt to create an online encyclopedia because he said he couldn't get enough volunteers. He turned to Larry Sanger who had a breakthrough insight.

"The idea was that anyone could go to this Web site and just by clicking a button start working on an article," he said. "All barriers to contribution were torn down.

Ward Cunningham provided the tools and invented a program to collaborate on the Internet quickly. In fact, Wiki is Hawaiian for quick.

"Wiki Wiki Web is what I called it," he said. "People who don't even know each other can find the way to fit their thoughts together."

It's that sharing of ideas that's at the heart of Wikipedia. It turns out that people like Adam Krellenstein like to share what they know and are eager to volunteer their time.

"It just is a fun thing to do," Wales said. "It's very entertaining to enter into a dialogue with other people. And you can start on the article and come back a week later and find it to be three or four times as large. So someone saw your article and decided to add to it."

It's not as if encyclopedias are anything new. This first edition of "Encyclopedia Britannica" was printed back in 1768 in Edinburgh, Scotland. "Britannica" is not just in books anymore; it's also online, with animation, graphics and videos. But its executive editor, Theodore Pappas, is not enthusiastic about a free Wikipedia.

"Excellence does not come cheap," he said. "And the last time we checked, hiring the foremost minds in the world, Nobel Prize winners, scientists, they do still like to eat. And they still like to get paid."

Most encyclopedias rely on paid experts to write articles that are checked and re-checked.

Wikipedia says it takes fact-checking seriously, too, but since it only has volunteers and a shoestring budget funded by donations, everything about it is radically different.

"On Wiki you start with publication and that's when you start your review," Cunningham said. "I mean it sounds backwards cause you might publish mistakes."

In fact a recent study by Nature magazine comparing the two found that among 42 science entries reviewed, "the difference in accuracy was not particularly great". Encyclopedia Britannica dismissed the study as fatally flawed, while Wikipedia just continued to grow.

It became so popular that not long ago Comedy Central's Steven Colbert bestowed his critique.

"I'm going to log on to Wikipedia here and I am going to change it," he said on one of his shows. "You see, any user can change any entry. And if enough other users agree with them, it becomes true."

Because most anyone can edit most Wikipedia articles, mistakes can and do happen. Altschul searched herself on Wikipedia. Her name was spelled right, but her birthday was wrong. Much more serious errors have been found. Someone falsely implicated former Kennedy adviser John Seigenthaler, Sr. in the Kennedy assassinations.

"When I first read it, I scoffed for a few minutes. And then I was furious about it," he said.

When he contacted Wikipedia the entry was corrected in minutes. Seigenthaler wrote a blistering op-ed in USA Today warning of anonymous attacks.

"Since anybody without any knowledge can put anything on there it is flooded with bad information," Seigenthaler said. "I'm not the only person who has been hit like this."

Soon other hoaxers were replacing Seigenthaler's photo with pictures of Hitler and Lee Harvey Oswald.

"An awful lot of bad things have been said about me on Wikipedia in the last six, eight, ten months," Seigenthaler said.

Wikipedia's solution to vandalism is to lock an entry so no one can tamper with it. But Wales points out that vandalism is not that common. Only a fraction of 1 percent of all articles needs to be locked.

"The weaknesses are, yes, it's updated in real time," Wales said. "It's being edited constantly ... You need to have some consideration if you ... read something that seems a little crazy you should stop and think about it."

Quality control troubled Wikipedia co-founder Sanger. He quit and went on to help create Digital Universe where experts control content. Recently he has announced a new venture called Citizendium that will mirror Wikipedia but will also include expert oversight. While these projects are just starting up, Wikipedia is already in its fifth year of real growth.

"We have the opportunity to start creating, building new kinds of things and share information in new ways," Wales said.

More information is being shared like never before. Whether it's new technology like "Encyclopedia Britannica" delivered on cell phones, or Wikipedia, the promise of a whole new world of information is at our fingertips.

An ancient tradition: Making hanji paper in Korea
Thanks for reading CBS NEWS.
Create your free account or log in
for more features.
View CBS News In
CBS News App Open
Chrome Safari Continue
Be the first to know
Get browser notifications for breaking news, live events, and exclusive reporting.